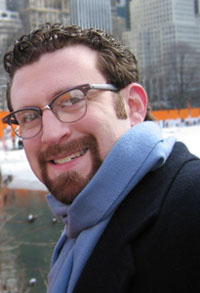 Daniel Goldmark, the new director of Case Western Reserve University’s Center for Popular Music Studies, will step out of the lecture hall and onto the Happy Dog Cleveland stage with ukulele in hand.

On Tuesday, Oct. 14, at 7:30 p.m., he will perform and explain the history of what he calls “Rust Belt Alley” music—popular songs from Cleveland’s industrial era, before the rise of rock and roll. The Happy Dog Cleveland is at 5801 Detroit Road. The event, part of the venue’s popular “Happy Dog University” series, is free.

Performing lectures that incorporate live music is a part of Goldmark’s new role as the center’s director: to engage and enlighten students and the public about popular music and to encourage research and interest in the topic.

Many songs on the set list relate to the Tin Pan Alley era, New York’s early 1900s music publishing and songwriting industry. But New York wasn’t alone in creating music at that time. Cleveland produced its own beat—the city’s “Rust Belt Alley,” from 1895 to the 1950s, as Goldmark describes it.

Moving from Los Angeles to Cleveland in 2005, Goldmark became fascinated with Cleveland’s music history and its sheet-music publishers that produced popular tunes, much like Tin Pan Alley publishers.

Among the treasures he discovered in his research were such oldies as: “Yes, We Got It. No Hot Dogs” (1924), “Adelbert Two-Step,” “My Name Will Always be Chickie” and many more.

Informing the public about these music treasures is one of his new responsibilities in leading the university’s Center for Popular Music Studies in the Department of Music. The center’s mission is to promote scholarship and teaching about popular music during the past century. The center presents lectures, conferences and performances to educate and entertain not just students, but also the general public.

Goldmark said that among his goals for the 4-year-old center is to bring in visiting popular music scholars to lecture and share their knowledge. While here, the scholars could engage in research at the Rock and Roll Hall of Fame and Museum’s Library and Archives and the popular music initiatives at Cuyahoga Community College.

“I’m excited to see what Daniel brings to his new role,” said David Ake, professor and chair of the music department.

“He will return to one of his main loves—mentoring graduate students,” said Ake, who was one of those students whom Walser nurtured when he directed the musicology program at UCLA.

Goldmark is among the foremost scholars of cartoon music in the country, and has published important studies on Tin Pan Alley and other early-20th century genres. He also worked in the film and music industry in Los Angeles before earning a doctorate and entering academia.

Goldmark earned a bachelor’s degree in music from the University of California, Riverside, and a master’s degree and doctorate in musicology from the University of California, Los Angeles. While there, he studied the music of Hollywood movies and researched the archives of Warner Bros. studios—particularly the Looney Tunes music for Bugs Bunny, Daffy Duck and others.

These experiences inspired Goldmark to write or edit several books, including: The Cartoon Music Book (Chicago Review Press, 2002), Tunes for ‘Toons: Music and the Hollywood Cartoon (California, 2005), Beyond the Soundtrack: Representing Music in Cinema (California, 2007), Funny Pictures: Animation and Comedy in Studio-Era Hollywood (California, 2011) and Jazz/Not Jazz: The Music and Its Boundaries (California, 2012).