Dads of newborn twins shorted almost as much sleep as moms, study finds 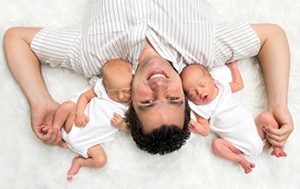 Mothers of twins struggle to get sufficient, uninterrupted sleep, what with double feedings and all. But a new study by researchers at Case Western Reserve University’s nursing school finds that fathers don’t fare much better.

“Both mothers and fathers are coming up short on the recommended eight hours of sleep,” said Elizabeth Damato, associate professor at the Frances Payne Bolton School of Nursing.

Damato was lead investigator on the study, “Sleep Pattern Gender Differences and Fragmentation in Postpartum Parents of Twins,” and among the first to analyze the impact of twin births on the fathers’ sleep. The findings were presented at the 28th annual meeting of the Associated Professional Sleep Societies (APSS) in Minneapolis.

The researchers recruited 89 families with infant twins from three major Midwestern hospitals. The average age of the parents was 32 for moms and 33 for dads.

Parents wore a wristwatch-like device on three separate occasions over three months to track their sleep. Parents also kept diaries of when they went to bed and when they awoke. In their APSS presentation, the researchers reported the amount of sleep parents recorded in the first and third months after their twins were born.

During the first month at home, fathers’ sleep was as short as the mothers’. Both mothers and fathers had multiple awakenings throughout the night, ranging from three to six times each night. By the third month, parent’s sleep was still as disrupted. When the parents did get a block of sleep, it averaged less than three hours over the study period.

In each month, both parents had short spurts of sleeping. Mothers had more interruptions on weekdays, which Damato attributed to them letting working dads gets some rest.

Neither parent was able to make up for lost sleep on weekends.

Next, researchers hope to learn how this disrupted sleeps impacts the dads’ daytime cognitive, emotional and physical functioning.

Contributing to the National Institutes of Health’s National Institute of Nursing Research and Foundation for Neonatal Research and Education-supported research were: Christopher Burant and Michael J. Decker from the CWRU School of Nursing; Kingman P. Strohl from the Department of Pulmonary and Critical Care Medicine at University Hospitals Case Medical Center; and Jennifer Brubaker from Cleveland Clinic.