Romanians to receive training through videoconferencing

That will soon change through a new collaboration between Case Western Reserve University’s Jack, Joseph and Morton Mandel School of Applied Social Sciences, West University of Timisoara (WUT) in Romania and the Office of Romanian Adoptions in Bucharest. 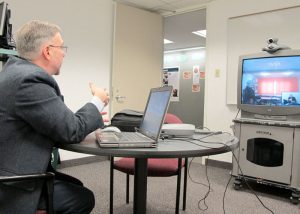 Romania continues to reform its treatment of orphans from the horrendous living conditions that came to light in 1989, when 150,000 children were housed in state institutions. Roughly 16,000 of those children were dying from treatable diseases, according to Victor Groza, the Grace F. Brody Professor of Parent-Child Studies at the Mandel School. The tragedy had remained hidden behind the communist Iron Curtain until the media exposed the human rights violations.

The Romanian adoption process is still behind in most modern approaches. As Groza explained, untrained public child welfare workers—some only high-school educated—handled the rush of early adoptions because former Romanian leader Nicolae Ceausescu had shut down the country’s social work and psychology programs.

At that time, no consistent legal adoption process was in place. But, in the 1990s and later, a new adoption system began to emerge to protect the children, halt unscrupulous inter-country adoption practices and promote domestic adoptions.

While Romanian universities have reestablished their social work programs, they still provide limited information on clinical and practice issues in adoption. This collaboration will help them strengthen their adoption curriculum and, ultimately, help lead to an increase in domestic adoptions.

Groza and Zoe Breen Wood, assistant professor at the Mandel School, will direct the collaboration that includes Karen Rosenberg, a clinical supervisor of adoption programs in Cleveland and Groza’s coauthor on the book, Clinical Practice and Issues in Adoption. The group also includes Romanian adoption experts Ana Muntean as onsite project director; Cosmin Goian, director of WUT’s social work program; and Roxana Ungureanu, onsite project coordinator and a research assistant at the Research Center Based on Child-Parent Interactions.

Wood said the program is modeled after continuing education programs offered to adoption workers in Cuyahoga County public and private social service agencies and is meant to strengthen the adoption competence of practitioners who work with adoptees and their families.

Starting in November, Romanian child welfare workers with master’s degrees in social work or psychology will be eligible for 10 three-hour training sessions taught by Mandel School faculty and alumni via videoconference.

Each session focuses on a different aspect of the adoption process. Muntean will provide interpretation when needed. Attendees also will receive electronic copies of Groza’s and Rosenberg’s book translated to Romanian.

Romanian adoption workers will be taught the long- and short-term effects of institutionalization on children, how to transition children from foster care to adoptive families, how to conduct interventions (social and mental health services) for adoptees at different ages and developmental stages, and how to match child qualities with parent expectations.

A sub group of these adoption workers will be chosen for six months of post-training and special supervision, earning a post-master’s certificate in adoption counseling.

Groza, who traces his roots to Romania, has worked for 22 years to improve conditions for Romanian children who were orphaned or abandoned.

“Romania has realized that institutions are no longer a place to call home,” he said. “There is still work to be done, but Romania is now a very different place than most people saw in the early 1990s.”

Those institutions once housed children who were relinquished by parents who lacked financial means to support them. At the time, the Romanian government imposed a “five children policy” that required and rewarded all families to have at least that many children.

He said the government misled parents to think their children were better off under state care.

International and domestic pressure eventually forced Romania to reform and transition institutional care to foster families, but the next step is to increase the number of permanent adoptive homes, Groza said.

But adoption workers and families seeking to adopt need to understand the process and the lifelong issues adoption brings to the adoptee, the adoptive parents and the birth parents.

All members of this “adoption triad” need additional support and resources at different stages of their lives. As Wood explained: “These families often feel alone and unsure of how to handle normal aspects of adoptive family life. It is important for therapists to be trained to help families recognize some of the normal challenges and to help them develop healthy coping strategies.”

“Children who enter adoption have a different set of genes and many have life experiences that predated entering the adoptive families,” Groza said.

Some of these differences can be changed, and others cannot, he said, but adoption workers have to explain this to families and have them grasp what lies ahead—and, if needed, offer lifelong assistance to make the adoption a success.