Fuel cells generate electricity from fuels more efficiently and with fewer emissions per watt than burning fossil fuels. But as fuel cells age, their efficiency decreases.

Researchers at Case Western Reserve University received an $800,000 Department of Energy grant to study how to make one type of fuel cell—solid oxide fuel cells—last longer. 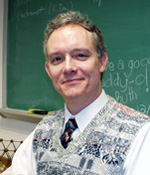 “Loss of performance over time is holding back the technology,” said Mark De Guire, associate professor of materials science and engineering at Case School of Engineering and project director. “If you’re only putting out 60 percent power after five years and generating the same level of emissions, you lose advantages over conventional power technologies.”

Solid oxide fuel cells operate at high temperatures (750 to 900 °C) and use a ceramic electrolyte, a ceramic cathode and a nickel-based cermet anode to produce electricity from fuels. To speed the search for why fuel cell performance decreases over time, an accelerated testing technique will be used in this research that replicates 5,000 hours of use in roughly one-tenth the time.

In earlier work, the researchers found structural and chemical changes at the cathode, made of lanthanum, strontium and manganese oxides, that they suspect are likely culprits in performance loss. Other parts of the cell also degrade, but after years of operation, losses of efficiency and output are greatest at the cathode.

De Guire and Heuer will lead the analysis of microstructural and nanoscale chemical changes in the cathode materials and the cathode’s interface with the ceramic electrolyte. They’ll try to determine which changes cause the losses and how to prevent or reduce the impact of the changes.