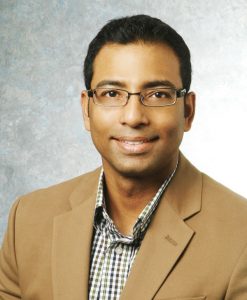 A research team led by Case Western Reserve University and collaborating with the Cleveland Clinic Foundation received a $1.9 million National Institutes of Health (NIH) grant to develop injectable artificial platelets that halt bleeding by sticking to bleeding sites and signaling natural platelets to home in on them.

The technology has broad applications to staunch bleeding in patients suffering from traumatic injury or surgery, as well as those with clotting disorders from deficiencies in platelet number or defects in platelet functions.

Lead researcher Anirban Sen Gupta, assistant professor of biomedical engineering, plans to use this five-year grant to further refine the design of artificial platelets’ shape, size and molecular surface-modifications, to mimic key morphological and functional aspects of natural platelets, and to test the design in several animal models.

Platelets, also called thrombocytes, are disc-shaped cell fragments in blood that are primarily responsible in clotting and healing at the site of an injury. Platelets also play a major role in multiple diseases and conditions, including the formation of unwanted clots that block blood vessels (thrombosis), inflammation, the immune response and cancer metastasis. The Sen Gupta lab is also investigating the use of artificial platelets to detect and treat each of these scenarios.

Natural platelet transfusions can manage bleeding but the transfusion product is often in short supply. Natural platelet products also carry a risk of transmitting infection and disease, and have a short shelf life between three and five days. Such drawbacks have spurred efforts to make artificial platelets that have low infection risks and longer shelf life.

“Although artificial platelet research has been going on for over 20 years, the past designs have focused primarily on mimicking and amplifying only the clustering mechanism of platelets,” Sen Gupta said. “Prior to clustering, however, natural platelets have this unique ability to stick to an injury site by specific molecular interactions, so that the cluster is directed selectively at that site. Without this site-selective sticking function, just the clustering function can cause free-floating platelet clumps that can lead to embolic risks.”

The current artificial platelet is made of biocompatible molecules, called lipids, which are used in several drug formulations already approved for cancer therapies. The surface coating is made of three kinds of peptides, which are short chains of amino acids. Two types of peptides promote injury site-selective “stickiness” under blood flow, while the third type causes platelet clustering selectively at the sticky site.

While pilot small animal model studies have shown the artificial platelet design to be highly effective, the molecular mechanisms that help to promote clots aren’t completely understood. Part of this NIH-funded new study is to uncover the details of how the stickiness and clustering work together to maximize the hemostatic capabilities.

Sen Gupta will lead the effort to optimize the artificial platelet design, while Keith McCrae in the Department of Hematologic Oncology and Blood Disorders at Cleveland Clinic, will guide the animal model testing. Marvin Nieman, an assistant professor of pharmacology at Case Western Reserve School of Medicine and an expert in platelet biology, will provide necessary consultation.

The Sen Gupta laboratory, with collaborators here and at other institutions, plans to use the insight gained from the NIH-funded research, to further develop artificial platelet technologies for treating multiple diseases. To this end, the lab is already researching the role of platelets in the immune response rejecting organ transplants, with William Baldwin at Cleveland Clinic, and the platelet role in breast cancer metastasis, with assistant professor of medicine William Schiemann, co-leader of the breast cancer program at Case Comprehensive Cancer Center.

Sen Gupta’s interest in platelets stemmed from his past research in blood-biomaterials interactions with the late Roger Marchant, a Case Western Reserve biomedical engineering professor.

“Platelets provide a unique paradigm regarding molecular interactions and cellular secretions that mediate a variety of disease scenarios,” Sen Gupta said. “Synthetic platelets could utilize this paradigm to customize detection and drug delivery technologies directed at these diseases.

“If this works,” he said, “we may have a significant technological advancement in treating many diseases in a site-selective fashion, where currently no effective targeted therapy exists.”

Natural platelets’ are shaped much like Mentos candies—a biconvex disk—and about 2 to 5 microns across. The shape and size enables them to escape the main flow of blood in a vessel and travel down along the vessel wall. Sen Gupta and his collaborators at University of California Santa Barbara are trying to further refine their artificial platelet design to enhance this “margination” function, thereby increasing the chance the artificial platelets interact with vessel injury sites, clots, micrometastatic sites etc.

“We want to mimic all of the molecular interactions that a natural platelet has, but then selectively take advantage of each interaction to customize a technology specific to a certain disease scenario,” Sen Gupta said.