CWRU teams advance to semifinals of energy challenge; vote for your favorite 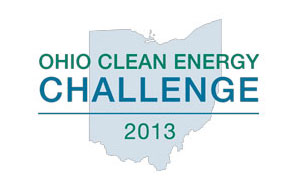 A fuel-cell bike. A kinetic battery for hybrid and electric cars. A way to turn algae into biofuel. An energy-use monitoring system.

These are the inventions created by four multidisciplinary teams of Case Western Reserve University students—and guided by our alumni—that will be showcased Jan. 29 in the semifinals of the Ohio Clean Energy Challenge. The teams include students from the Case School of Engineering, the College of Arts and Sciences, Weatherhead School of Management and the Cleveland Institute of Art.

Established by the Department of Energy’s Office of Energy Efficiency and Renewable Energy, the 2013 Ohio Clean Energy Challenge is part of the National Clean Energy Business Plan Competition. Throughout the process, teams develop clean energy business plans and work with mentors to perfect their commercialization strategies and investor pitches. Then, during the Ohio competition, teams present their investor pitches in front of a live audience and a panel of expert judges, including venture capital and private equity professionals and entrepreneurs.

In addition, all semifinalist teams have the chance to win the Viewer’s Choice Award through a Facebook contest sponsored by the University Clean Energy Alliance of Ohio, which runs the statewide program. The team with the highest number of votes for their video by Jan. 25 receives $1,500. To view the videos and vote, go to uceao.org/challenge/viewerschoice.

First, though, it’s important to know more about each team and their inventions.

EcoSpinners is designing an integrated and programmable electric bike with a proprietary fuel cell range extender. The bike’s power pack is a hybrid of advanced lithium-ion polymer battery and liquid-fueled fuel cell. The critical part of the bike design is a low-cost fuel cell, running on non-polluting and recyclable liquid fuel that allows an increase in range without increasing the cost of the power pack.

FlyDrive, a flywheel regenerative braking system, offers a viable technology that will save money while providing performance that is commensurate with, or better than, current battery systems, as flywheels can be cycled more than 10 times faster than batteries and two times faster than super-capacitors. FlyDrive is meant for use in in hybrid and electric vehicles.

Smartility designs, markets and sells technology that gathers energy consumption data from electrical outlets, transmits the data to the consumer’s account on Smartility’s website and generates customized energy reports for the consumer. Smartility products allow for home energy management, in addition to providing reports and analytics, which allow users to gain an understanding of their consumption and how to sharply cut expenses.

Dan Dean, director of alumni and student relations for the Case Alumni Association, and Mindy Baierl, commercialization program manager for the Great Lakes Energy Institute, connected the alumni volunteers with students, based on the students’ inventions and the alumni’s expertise.

“Our alumni mentors have been very engaged and supportive of the teams,” Baierl said. “Several plan to be traveling to Columbus to support their team for the live pitch event.”

For more information on the program, visit uceao.org/challenge.

To vote for your favorite video, go to uceao.org/challenge/viewerschoice.