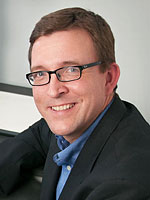 Specifically, researchers discovered that children at the lowest achievement levels when the study began made the greatest gains and exceeded expectations, narrowing the gap between at-risk children and higher achievers.

The Cuyahoga County Office of Early Childhood Invest in Children initiative, created in 1999 to serve the needs of young children, and the Cleveland Foundation funded the research to evaluate and measure the effectiveness of the preschool program.

“High-quality preschool settings are a sure bet for helping children get ready for kindergarten, and are particularly effective in helping higher-risk children close the readiness gap,” said Robert Fischer, lead researcher of the study and co-director of the Center on Urban Poverty and Community Development at the Mandel School.

The analysis was presented in the Journal of Education for Students Placed at Risk article, “Getting Ready for School: Piloting Universal Prekindergarten in an Urban County.”

Researchers studied 204 randomly selected children. Their average age was 3.6 years; 51 percent were girls. The children were from families that were mainly African-American (55 percent), had parents with at least a high school education (70 percent) and few listed English as a second language (7 percent).

Children scoring below the 25th percentile at baseline on the standardized tests showed gains three to four times greater than children scoring higher initially. A child’s baseline score was shown to be a leading predictor of how much growth the child showed while in the preschool setting. Investing early in good preschool education for children between age three and five proves effective—and especially those who started at the achievement level below the 50th percentile on standardized testing for their age group, Fischer said.

The study provides policymakers with valuable preschool information that can benefit children in their communities.

Fischer also offered advice on how parents can prepare their children for kindergarten:

Contributing to the study were: Tirth Bhatta, from the sociology department; Claudia Coulton, co-director of the Poverty Center at CWRU; and Lance Peterson, from the University of St. Thomas/St. Catherine University’s School of Social Work.