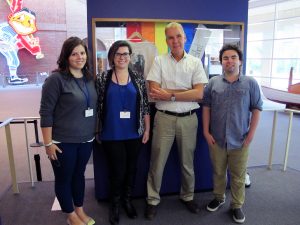 The exhibit, “The Victory of Self: The LGBT Community in Northeast Ohio,”open now, coincides with the 2014 Gay Games in Cleveland, Aug. 9-16. The historical society is at 10825 East Blvd. in Cleveland.

Grabowski and the students compiled the history from 100 boxes of letters, banners, posters and other memorabilia from 20 collections donated to the museum by members of the local LGBT community.

“Our hope is that the participants of the Gay Games 9 will come out to University Circle and learn about the history of the movement in Cleveland while they are in town,” Grabowski said.

But Grabowski, the WRHS senior vice president of research and publications and CWRU’s Krieger Mueller Associate Professor of Applied History, surprised second-year students Daliah Greenwald and Quinn Winters and third-year student Erin Law with the assignment to create an exhibit.

With a few ideas for the exhibit to set the project in motion, Grabowski sent them off to the archives to find information that reflected Cleveland’s LGBT history, from when the community was mainly underground to its more public “coming out” since the 1960s.

“We got to take it from there,” said Law, a history major from Vincent, Ohio.

The challenge sent the treasure-hunters searching WRHS’s archive stacks and storage areas. Greenwald found a Frisbee given away by the Gay People’s Chronicle at the 1993 Pride Parade and other ephemera.

“This was a dream come true to experience learning about how a museum works and handling historic artifacts,” said Winters, a political science major from Saratoga, Calif.

Among the artifacts Quinn found were unpublished emails from people who provided a personal view of life in Cleveland’s LGBT community.  “It was like you were reading an autobiography of someone’s life,” he said.

Greenwald and Law found the messages they read made people came alive, too, and created a desire to meet the writers.

The information also shaped their perceptions. Winters, who is from the San Francisco area, always thought of New York City and San Francisco as leaders in the gay movement. He learned that Cleveland was on the forefront long before those and other urban areas.

Among Law’s favorite artifacts were a “yellow pages” that served the gay and lesbian community. Posters and other materials in the archives formed a picture of a subculture that few probably knew existed or realized how large it was, she said.

“This was a unique opportunity to be there at the beginning of the exhibit and see it go up,” said Greenwald, a history major from Syracuse, N.Y.

Her search through the boxes yielded several colored posters and a photo mask of late playwright and local gay activist Aubrey Wertheim. Greenwald organized the printed material in the LGBT’s symbolic colored rainbow on the wall with the mask at the center.

Because the students had chosen more artifacts than available exhibit space, they had to make tough calls about what to keep and what to cut.

Once decided, they prepared the items for show. Fragile paper posters or flyers were duplicated at the Kelvin Smith Library and returned to WRHS for dry mounting—a skill they also learned. They also had to paint exhibit cases, and arranged the material for display with a museum exhibit designer.

For more information about the exhibit and WRHS, visit wrhs.org/news/Victory_Self_Capture_Civil_Rights_Movement_Northeast_Ohios_LGBT_Community.