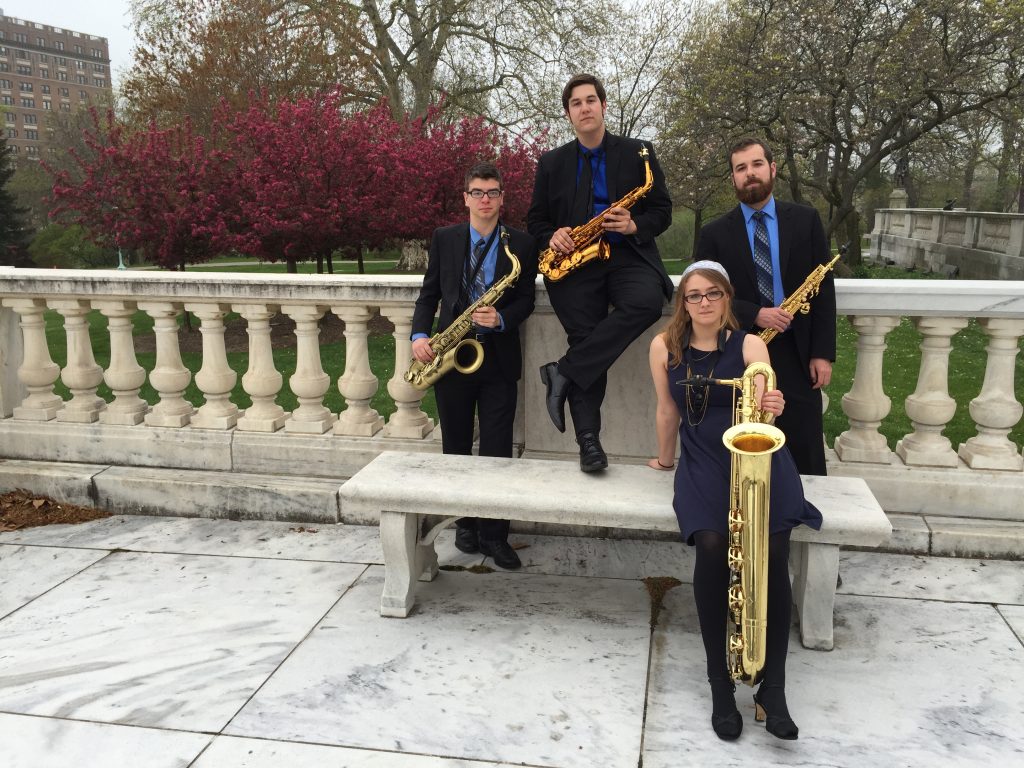 It’s been a whirlwind of a year—complete with international travel—for Case Western Reserve University students and saxophonists Matthew Castner, Leah Feitl, Collin Kemeny and Ryan Rose, who comprise the Ingeniare Quartet (named for their backgrounds in engineering).

Next up: Performing at the 2016 Austin (Texas) Coltman Competition this weekend.

They’re one of just 10 college-aged chamber music groups selected from around the world to participate—but they’d only applied to the competition on a whim.

“I think we were all a little surprised to hear [we were selected],” Castner said. “We sent in the application and we weren’t really expecting anything.”

Tomorrow, they will compete in the semi-final round, with five groups advancing to the finals. The overall winner will be invited back to perform at the Austin Chamber Music Center Summer Festival and featured in a radio broadcast on KMFA-FM.

While they know they will be up against challenging competition, the quartet’s members intend to capitalize on their opportunity.

“I hope that we’re confident in our own performance. We’re going to be up against a lot of competitive groups,” Rose said. “We do so many other things [in addition to] our quartet and still manage to sound pretty good, so I think for me, I just want to be confident with how we played.”

Their trip is supported by the Friends of Music Fund through the Department of Music.

While the Austin competition is an honor, they consider the contest an added bonus to the many other opportunities they’ve had this year—especially, their trip to Finland just a few weeks ago.

In fact, the quartet started in March 2015 with a single goal: impress Olli-Pekka Tuomisalo, professor of saxophone from the prestigious Music Institute Juvenalia in Helsinki.

They knew that if they impressed Tuomisalo, guest artist at their studio’s annual Saxophones on Saturday performance at Harkness Chapel, there was a chance they would earn an opportunity to visit Finland.

After their performance, Tuomisalo informally mentioned he would like for the students to visit him in Finland. But it wasn’t until two months later that they received an official invitation to perform four recitals in four days this spring.

“We were immediately very excited and blown away when we found out such an amazing opportunity was being offered to us,” Rose said. “But then it was also a hard road to get enough financial support to make the trip a reality.”

With the support of their instructor, Greg Banaszak, the students spent the entire next year raising enough money to make the trip, through a benefit recital, many gigs, performances at university functions and Support of Undergraduate Research and Creative Endeavors.

“I think Finland was really the arrival point,” Castner said. “We worked a long time to get ready for it.”

After tomorrow’s performance, they have a few more gigs planned in Cleveland before the end of the academic year. But the quartet is likely to dissolve after that, as the students head in different directions when the school year ends.

Feitl and Castner will both graduate in May, while Kemeny and Rose each have one year remaining at CWRU.

Moving forward, they all hope to keep music in their lives somehow—and three of the four even plan to pursue the interest even further academically, which wasn’t part of the plan when they first came to Case Western Reserve.

Castner, Feitl and Rose are all double majors in engineering and music, and Kemeny only recently dropped his engineering major to focus on composing music.

Meanwhile, both Castner and Rose admit they never really thought they’d be applying for graduate schools in music. For Castner, the quartet was actually the reason he ultimately decided to pursue music as a career.

“When all of this quartet stuff started happening, we got to do all of these amazing things and go to all of these places,” he said. “That’s when I thought, maybe this is worth a shot.”

Feitl intends to continue in engineering, but she hopes to stay involved in music through another quartet or local band wherever her career takes her.

While their careers in music may be uncertain for now, the past year has provided them with countless positive experiences.

Feitl explains that one of the best parts of the quartet has been “being in a place where you’re working with people who you really respect and you know they respect you. That happens so rarely—that you’re with a group of people working on great stuff and you all get along and that just makes it better.”