In its annual list of the brightest young minds in the country, Forbes selected two members of the Case Western Reserve University community. Robert J. Gilliard Jr., a postdoctoral scholar in chemistry, and Felipe Gomez del Campo, a senior aerospace and mechanical engineering major, are part of the 2016 “30 Under 30” special, published this week. 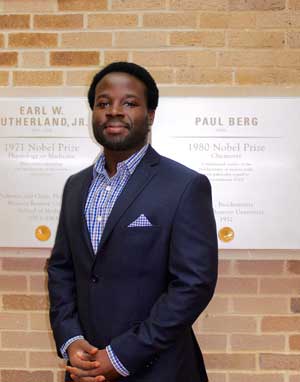 Gilliard first came to Case Western Reserve on a summer fellowship in 2008 while an undergraduate at Clemson University. During that time, the engineering-turned-chemistry student worked with Professor John Protasiewicz, building a relationship that ultimately led to his return to conduct research in Protasiewicz’s lab last fall.

After earning his doctorate in chemistry from The University of Georgia in 2014, ETH Zurich—a leading research institution—offered him a chance to join Hansjörg Grützmacher’s group to study phosphorus heterocycles—compounds that have atoms of at least two different elements in their rings—and related molecules.

But shortly after, Gilliard was awarded a United Negro College Fund/Merck Fellowship to explore phosphorous-based bioactive and materials chemistry. With that $92,000 stipend and research grant, Gilliard could conduct his studies in Protasiewicz’s lab.

So Gilliard and the two researchers worked out a collaborative research plan: Gilliard went to Switzerland in July 2014 and came to Cleveland in September 2015; while in either location, he travels to the other to discuss the results of the joint projects.

“I thought it would be a great fit, and indeed it is,” Gilliard said of why he wanted to continue his research with Protasiewicz. “Particularly, our research collaboration with Grützmacher … is designed to take advantage of the collective expertise and drive chemistry into exciting new areas.”

Gilliard also receives support for his collaborative research through the Ford Foundation Fellowship, a $45,000 award earned in a recent competition administered by the National Academy of Science.

Gilliard already has 16 publications, and, most recently, he presented his research at the 2015 Pacifichem conference in Honolulu. In 2015 alone, he traveled to eight countries, and he previously was selected as a member of the United States delegation to the Nobel Laureate meeting, where he met more than 40 Nobel Prize winners.

“Very few scientists have had such exposure at this early career stage, and I am grateful to be able to represent my small hometown of Hartsville, S.C.,” Gilliard said. 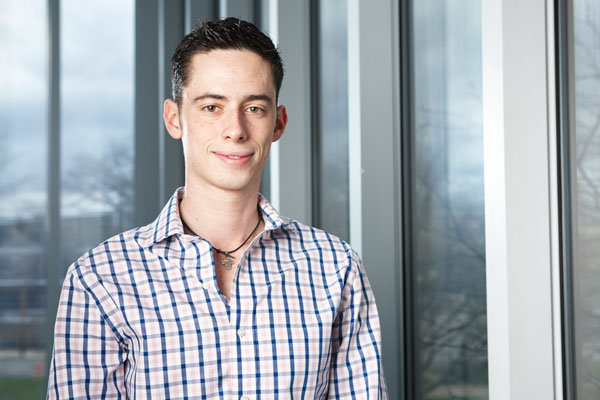 Gomez del Campo likely was underwater when “30 Under 30” came out. Though he knew the list would be published at 10 a.m. on Jan. 4, the Case Western Reserve varsity swim team is training near his home in Florida this week, and practice started precisely at that time.

Rather than jump in a few minutes late or duck out early, the dedicated distance swimmer practiced with the team until noon, before finally checking his phone to see if he’d made the list. Yet even then, he kept the news quiet from his teammates; they only found out after Coach Doug Milliken tweeted the news.

His teammates have long known about Gomez del Campo’s successes, though. The native of Mexico City started his own company, FGC Plasma Solutions, in 2013 to bring to market a device that shoots a precise amount of plasma into jet engine fuel. What started as a high school science fair project is now a patent-pending technology that could lead to a 10 percent decrease in fuel consumption, resulting in reduced emissions and operating costs. Over the past year, he’s been testing his work at Cleveland’s NASA Glenn Research Center. (Fitting, given that Gomez del Campo credits his passion for engineering partially to growing up near Kennedy Space Center after his family moved from Mexico to Florida.)

Last spring, Gomez del Campo was recognized at the White House by President Barack Obama during a panel highlighting young entrepreneurs. As part of the event, he pitched his product to investors from ABC’s Shark Tank.

The trip to Washington, D.C., was just one of many national and local recognition opportunities for Gomez del Campo; in just two 2015 competitions alone, he earned $100,000 in support, plus awards and honors at numerous other events.

“It’s all pretty exciting,” Gomez del Campo said. “But at the same time … it’s one step ahead of the science. Last year was a lot of publicity, but this year is about the science. It’s all a reminder that there’s a lot of work still to be done.”