Human immunodeficiency virus (HIV) infection is no longer a fatal condition, thanks to newer medications inhibiting the retrovirus, but a puzzling phenomenon has surfaced among these patients: non-AIDS complications. Scientists at Case Western Reserve University School of Medicine have resolved the mystery with their discovery of the leaky gut as the offender. Bacterial products seep out of the colon, trigger inflammation throughout the body and set into motion the processes of cardiovascular, neurodegenerative, chronic kidney and metabolic diseases, and cancer. Their findings appear in an edition this summer of PLOS Pathogens. 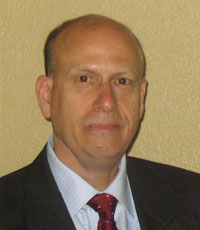 “Because the space inside the colon (the lumen) contains the highest concentration of bacteria in the body, we provide evidence that bacterial products are leaking out of the colon into the bloodstream of these patients,” said senior author Alan D. Levine, professor of medicine, pharmacology, pathology, molecular biology and microbiology, and pediatrics at the School of Medicine. “The immune system responds by launching an attack on these bacterial products, activating inflammation throughout the body that never stops.”

Tight junctions are small, indented areas along the epithelial surface of the colon, something like the interior folds of a partially inflated accordion. Tight junctions form a barrier within the colon by sealing adjacent epithelial cells, and each tight junction seals the gut lumen (colon interior) from the colon exterior. Epithelial (or surface) cells are compacted against each other, but a miniscule opening (the intercellular space) allows ultra fine molecules to pass through. The tight junction complex forms tiny strands to seal that intercellular space.

Levine and colleagues demonstrated in their investigation that patients whose HIV was well controlled with antiretroviral medications still had weakened intestinal tight junctions. They came to this conclusion by comparing biopsies from 31 virally suppressed HIV-positive patients and from 35 healthy patients who had no HIV infection. (Virally suppressed means the level of circulating virus in the bloodstream is extremely low or undetectable.) The biopsies were obtained from patients at University Hospitals Case Medical Center during routine colonoscopies, a procedure to inspect visually the health of the colon. During the procedure, biopsies were collected from three places in patients’ intestines: the end of the small intestine (terminal ileum), the beginning and middle portions of the colon (ascending and transverse) and toward the end of the colon (descending).

Investigators examined the biopsy tissue that sealed the spaces between epithelial cells and formed a barrier against luminal bacteria. They found that the number of cells and their density (or packing) was unchanged, meaning the leaks are not caused by cell death or pronounced changes in tissue structure or epithelial surface. However, the RNA and proteins that contribute to the organization of the tight junctions in the colon were decreased.

“The decline of the tight junctions correlated with increased microbial translocation and a greater level of inflammation throughout the body,” Levine said. “This finding provides evidence that a defect in the gut wall allowing bacterial products to leak out is the likely source of immune activation and subsequent inflammation. Basically, we found with this group of HIV-positive patients that the gut is leaky and why.”

These findings provide a clear target for clinical intervention—repair the molecular and structural epithelial leakiness in the tight junctions of the colon. However, critical questions must be resolved: Is the disruption caused by an HIV infection, the remaining HIV virus itself, antiretroviral drugs or all three combined to play a role in weakened tight junctions? What changes in epithelial cells might cause decreased activity of the tight junctions? Will repairs to the tight junction lead to stronger barrier function and reduced gut leakiness? Will reduced gut leakiness result in less systemic inflammation and therefore cause less cardiovascular, neurodegenerative, chronic kidney and metabolic diseases, and cancer in the virally suppressed HIV-positive patient?

“The key observation here is that virally suppressed HIV-positive patients have an important molecular and tissue defect—a leaky gut,” Levine said. “Thus, the clinical implication is quite clear. We will need additional supplemental therapeutic approaches to repair this damaged epithelium in the colon.”