Fabio Cominelli, a professor in the departments of Medicine and Pathology at Case Western Reserve University School of Medicine and director of the school’s Digestive Health Research Institute, has received a $9.7 million, five-year renewal program project grant from the National Institute of Diabetes and Digestive and Kidney Diseases of the National Institute of Health, with the goal of better understanding the origins of Crohn’s disease and eventually developing a cure.

The exact cause(s) of the disorder are unknown, making a cure elusive. In the past, diet and excess stress were leading candidates, but today’s consensus is that while these may make Crohn’s disease worse, they don’t precipitate it. Instead, a combination of genetics and a faulty immune system probably are involved.

Among the objectives is to discover why certain mice—specifically those who experience spontaneous gut inflammation—appear to have an innate immunity defect that predispose them to develop Crohn’s disease.

The aim is to replicate these findings in humans, leading to a cure for at least some patients with this devastating ailment. Symptoms of Crohn’s disease include severe abdominal pain and cramps, weight loss, recurrent diarrhea, loss of appetite, and fatigue. About 780,000 Americans have Crohn’s disease.

Specifically, growing evidence, including work done by Cominelli and his colleagues, suggests that Crohn’s disease may be caused by a poorly regulated innate immune response against unknown antigens in a genetically susceptible person. (Antigens are foreign substances in the body that produce an immune response). 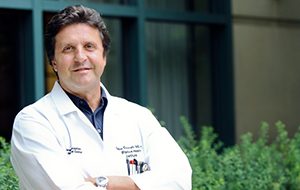 “Before and during the first five-year project, my colleagues and I provided evidence of the importance of innate immunity and the role of what’s called the NOD2 gene,” Cominelli said. “This gene supplies instructions for making a protein that helps protect the body against foreign invaders in a disease called ileitis.”

The Cominelli team earlier found that a deficit in the body’s natural immune system may play an important role in causing the disease. The immune system includes numerous infection-fighting cells including those regulated by the NOD2 gene. In studying ileitis in mice, Cominelli and his colleagues found a shortage of these cells and, as a result, harmful antigens weren’t being removed from the body. Based on this finding, a cure for Crohn’s disease could include developing an alternative source of these cells to boost the body’s immune system.

All three projects will expand the study of molecules such as the NOD2 gene, as well as the closely related NOD1, IL-1, and IL-33 genes, and their relationship with the gut microbiome (the bacteria that populate our intestines). IL-1 and IL-33, or Interleukin-1 and -33, are proteins that promotes the production of immune cells to fight infections.

“We are extremely grateful to the National Institute of Diabetes and Digestive and Kidney Diseases for their continued confidence in us,” said Cominelli. “My colleagues and I are committed to translating our research into new medications and treatments that will rectify the gaps in the immune systems of patients with Crohn’s disease, ultimately resulting in a cure.”