A researcher at Case Western Reserve University has been awarded a four-year, $2.4 million federal grant to uncover how high-frequency electrical stimulation to the spinal cord reduces or eliminates chronic pain.

Electrical stimulation has been used for nearly 40 years to ease suffering. But investigators recently found that drastically increasing the cycles of electricity applied—from 20 per second to 10,000—halted pain in some patients who otherwise found no relief.

A team of scientists involved in the Cleveland Functional Electrical Stimulation (FES) Center will use the National Institute of Neurological Disorders and Stroke grant to seek not only the answers to why high frequency works, but lay the foundation for a new and powerful alternative treatment.

Chronic pain is the most prevalent health problem worldwide, yet is often inadequately treated. 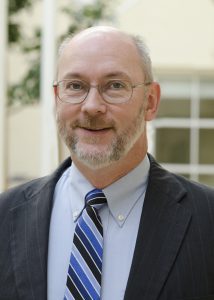 “The pain is debilitating,” said research leader Kevin Kilgore, a professor of orthopaedics at Case Western Reserve School of Medicine, a staff scientist at MetroHealth Medical Center and leader of the new research. “These patients are looking for anything that can give them some relief.”

Adding to the need for new options is escalating opioid abuse—including heroin use—by those who become hooked on powerful painkillers.

Electrical stimulation is considered a last option for chronic pain management. Yet since 2008, about 50,000 patients are implanted with a spinal cord stimulator annually, according to the American Association of Neurological Surgeons. The stimulator delivers just a few volts of electricity in repeated cycles to interrupt nerve activity and provide relief.

“A spinal cord stimulator (SCS) provides significant relief to half of those patients,” said Kilgore, who is also associate director of technology at the FES Center. The center is a consortium of the Louis Stokes Cleveland VA Medical Center, MetroHealth Medical Center, Case Western Reserve and University Hospitals Case Medical Center.

“Some who don’t get relief on standard SCS do get relief with high frequency SCS,” Kilgore explained. “If we can figure out how it works, we can optimize and enhance the procedure to get better pain relief.”

To start, Scott Lempka, an investigator at the FES Center and postdoctoral research fellow at Cleveland Clinic’s Center for Neurological Restoration, will lead development of the computer model of the spinal cord and its interior nerves to learn what occurs when an implanted electrode delivers an electrical current.

Kilgore, with Narendra Bhadra and Niloy Bhadra, researchers in the Case Western Reserve biomedical engineering department, will test different wave forms of stimulation on animal models to see what nerves are activated or blocked under different parameters.

With that information, they’ll take steps to improve their ability to either activate nerves that provide relief or block nerves that signal pain.

Some research by Kilgore’s group suggests that raising the electrical cycles into the kilohertz range may prevent the nerves from conducting, which stops the pain signals from reaching the brain, thus eliminating the pain.

While traditional stimulation produces a “pins and needles” sensation in patients during treatment, high-frequency stimulation does not. “The patients feel nothing,” Kilgore said. “Part of our study is to understand why that happens.”

Kilgore and his team hope their work will eventually make the therapy more widely used, especially in light of the national opioid epidemic.

The U.S. Substance Abuse and Mental Health Administration estimated in the 2013 National Survey of Drug Use and Health, the most recent available, that 1.9 million Americans were addicted to opioid painkillers and 517,000 were addicted to heroin.

“The SCS therapy does require surgery to implant the electrode,” Kilgore said. “But if you get significant relief and you’re not on opioids the rest of your life, that’s a pretty good trade-off.”