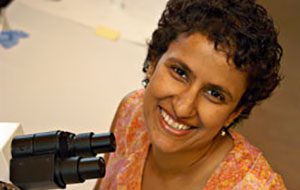 When her father was diagnosed with lung-scarring pulmonary fibrosis, Radhika Atit, an associate professor of biology at Case Western Reserve University, began digging into every detail about the disease.

The cause of fibrosis, the aberrant hardening of organ tissues, is often unknown, and there is no cure. The damage grows as tough, fibrous tissues take over the cells needed for the lungs, heart or other organ to function.

Atit studies the development of skin, the body’s largest organ. During the past five years, her lab created the first genetic portrait of the condition in a mouse model of human skin, showing genes, signaling pathways and protein production associated with fibrosis.

“We’re coming at this from the animal-model side, hell-bent on ensuring we can test specific pathways in specific cells,” Atit said. “We can see fibrosis developing from the beginning and look at every step along the way.

“You can’t really do that with people,” she said. “When they go to see the doctor, their condition has already advanced.”

The fibrosis process, Atit said, may well be the same or similar in other organs. Researchers found that 32 genes with ramped-up activity in the mouse model are also overexpressed in human fibrotic diseases and tumor stroma—the extracellular matrix on which solid tumors grow.

The work narrows a list of genes that can serve as potential biomarkers for patients being treated with inhibitors of the Wnt pathway—a signaling pathway involved in skin fibrosis.

Cells called dermal fibroblasts make collagen and the extracellular matrix—the proteins that provide skin’s structure. Inside the cells, a protein called β-catenin directly or indirectly regulates the genes that produce the matrix.

“What turned us on to looking at this pathway in fibrosis were hints in others’ research that showed that regulators of the pathway and proteins in the pathway were different in keloid scarring and sclerodoma, which are both fibrotic skin conditions,” said Hamburg-Shields, who helped design the experiments and collected the data.

Normally, the Wnt signaling pathway regulates protein β-catenin. But in the mouse model, fibroblasts express a form of β-catenin that does not degrade and results in spontaneous fibrosis. Stable β-catenin appears to crank up the fibrotic machinery by altering the expression of genes that encode extracellular matrix proteins and by altering the activity of matrix protein regulators.

When that happens, “it’s like dumping cement on the tissue, and as the tissue becomes more and more filled with matrix proteins, blood vessels die off. Without them, tissue dies,” Atit said.

Using publicly available studies of human fibrotic tissues and cells in other organs, undergraduate researcher Nate Mullin, now a CWRU junior, found that 32 genes from their animal model of skin fibrosis were dysregulated in other fibrotic diseases.

Further studies are needed to determine if there are direct links. But “it strengthens the case that these genes might be responsible for fibrosis if they keep showing up,” Mullin, said.

During the research, Atit told her father, Paresh Motilal Atit, about these findings and described the experiments they designed to reveal them. Paresh Atit, who had been an electronic technician at Ford Motor Co., had encouraged her to seek a profession she loved, where she could excel.

He was proud of her commitment to science and pursuit of discovery and always asked about her work. He would challenge her to think five steps ahead.

During one conversation, he asked if the study were published, would it help the next generation of experiments and scientists. She told him it should.

As the disease progressed, Paresh Atit decided to donate his body to science and medical evaluation. “I asked him why,” Radhika Atit said.

He responded: “I am only dedicating my body. You have dedicated your life to science.”

Paresh Atit died the day his daughter submitted the revised research manuscript for publication. Radhika Atit continues to investigate the mechanisms of the disease, searching for ways to monitor and eventually treat fibrosis.

She and her colleagues are already working with other researchers, using the list of genes they created. They’re trying to find which are responsive enough to β-catenin signaling activity to be used as biomarkers for testing Wnt inhibitors. Other research has shown that inhibiting the Wnt pathway protects against kidney and skin fibrosis.

“It’s difficult to quantify whether a treatment is achieving any improvement in fibrotic tissue without performing invasive and painful biopsies,” Hamburg-Shields said. “If we can find a sensitive protein that circulates in the blood and changes with the activity of the disease, that would be ideal for measuring the response to new anti-fibrotic therapies.”