Solar cells made with films mimicking the structure of the mineral perovskite are the focus of worldwide research. But only now have researchers at Case Western Reserve University directly shown the films bear a key property allowing them to efficiently convert sunlight into electricity.

Identifying that attribute could lead to more efficient solar panels.

Electrons generated when light strikes the film are unrestricted by grain boundaries—the edges of crystalline subunits within the film—and travel long distances without deteriorating, the researchers showed. That means electric charge carriers that become trapped and decay in other materials are instead available to be drawn off as current.

The findings, published in the journal Nano Letters, indicate that solar cells could be made thicker without harming their efficiency, said Xuan Gao, associate professor of physics and author of the paper. 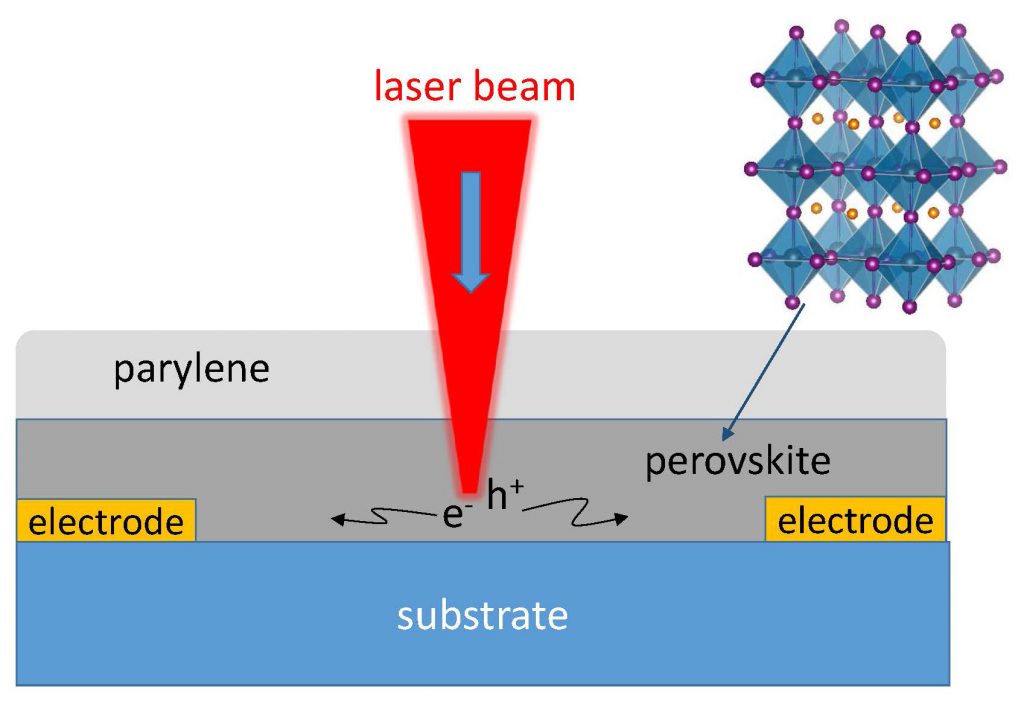 “The question has been, ‘How are these solar cells so efficient?’ If we would know, we could further improve perovskite solar cells,” Burda said. “People thought it could be due to unusually long electron transport, and we directly measured it.”

Diffusion length is the distance an electron or its opposite, called a hole, travels from generation until it recombines or is extracted as electric current. The distance is the same as transport length when no electric field (which usually increases the distance traveled) is applied.

The labs made repeated measurements by focusing a tiny laser spot on films 8 millimeters square by 300 nanometers thick. The films were made stable by coating the perovskite with a layer of the polymer parylene.

The light generates electrons and holes and the photocurrent, or stream of electrons, is recorded between the electrodes positioned about 120 microns away from each other while the film is scanned along two perpendicular directions. The scanning yields a two-dimensional spatial map of carrier diffusion and transport characteristics.

The measurements showed diffusion length averaged about 10 microns. In some cases, the length reached 20 microns, showing the functional area of the film is at least 20 microns long, the researchers said.

In some materials, grain boundaries decrease conductivity, but imaging showed that these interfaces between grains in the film exerted no influence on electron travel. Gao and Burda say this may be because grains in the film are well aligned, causing no impedance or other detrimental effects on electrons or holes.

Burda and Gao are now seeking federal funds to use the microscopy technique to determine whether different grain sizes, orientations, halide perovskite compositions, film thicknesses and more change the film’s properties, to further accelerate research in the field.

This article was originally published Jan. 10.