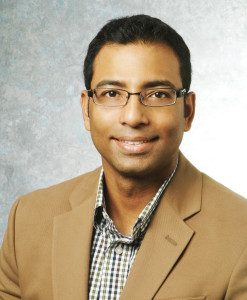 A Case Western Reserve University researcher has been awarded a five-year, $1.9 million grant from the National Institutes of Health (NIH) to transform clot-forming synthetic platelet technology into devices that dissolve clots to prevent strokes and heart attacks.

Anirban Sen Gupta, associate professor of biomedical engineering at Case School of Engineering, and his collaborators Samir Mitragotri at University of California Santa Barbara and Wei Li at Cleveland Clinic, believe that platelet-inspired synthetic particles can be used to deliver anti-clotting medicines directly to clots that pose a serious health risk.

“We originally designed synthetic platelets to potentially assist in stabilizing soldiers wounded on the battlefield or civilians injured in accidents and also treat patients who are at bleeding risks due to various disease scenarios,” Sen Gupta said. “We soon realized that the technology can be refined to also do the opposite—deliver clot-busting drugs to dissolve clots in blood vessels before they trigger stroke and heart attack. ”

Targeted treatment would reduce the risk of uncontrolled internal bleeding and other harmful side effects that can result from injecting anti-clotting medicine directly into the blood stream. For this new line of research, the Sen Gupta and Mitragotri team will engineer artificial platelets loaded with anti-clotting medications. The particles will be designed to home in on clots and deliver the drugs to dissolve the clot. Li will test this clot-busting technology in animal models of arterial thrombosis.

This new research will run in parallel to their ongoing research in which Sen Gupta developed and patented a synthetic platelet technology called SynthoPlate, supported by a $1.9 million grant from the NIH awarded in 2014. The synthetic platelets mimic the form and surface biology of natural platelets. They’ve been shown to stop bleeding 70 percent faster in small animal models—a step toward stabilizing patients who otherwise could die from severe bleeding.

To advance the original work, Sen Gupta is working with Keith McCrae at Cleveland Clinic and Vikram Kashyap at University Hospitals to optimize and test the SynthoPlate’s ability to treat bleeding in large animal models. This research is supported by two additional grants from the NIH Center for Accelerated Innovations, based at Cleveland Clinic, and the Case-Coulter Translational Research Partnership, based in the biomedical engineering department at Case Western Reserve.

Sen Gupta’s laboratory focuses on platelets as a drug delivery device paradigm because platelets are key players in various cellular and molecular interactions found in multiple pathologies. To that end, the laboratory is also exploring the role of platelets in immune response and cancer metastasis.