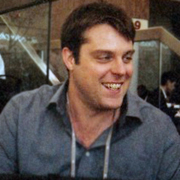 Update Monday, Feb. 25: The panel now can be viewed online.

An idea emerging from research at Case Western Reserve University will be pulled from the ivory tower and placed squarely among executives from IDEO, Google and Udacity at the Wisdom 2.0 Conference in San Francisco today.

Anthony Jack, assistant professor of cognitive science, psychology and philosophy at Case Western Reserve, led a pivotal study that shows when the brain fires up the network of neurons used for analytic thinking, it suppresses the network that allows people to empathize and vice versa. His research shows we have a built-in neural constraint on our ability to be simultaneously empathetic and analytic.

The findings reveal why engineers or scientists may come up with new products or solutions but fail to consider how users with far less technical ability would embrace their efforts.

“It takes a lot of empathetic imagination to put yourself in the shoes of someone who’s coming at your product fresh, when you already know it inside out,” Jack said. “When you’re technologically smart, you’re often not so good at that kind of imagination.

“Those who are paying attention to the user, who are empathetic, must have input,” he continued. “That’s important to product development.”

Jack will be part of a panel discussion, titled “Cultivating Empathic Design in an Analytical World.” He said his study “provides hard evidence for the importance of the touchy-feely stuff people tend to dismiss.”

The other panelists are Bradley Horowitz, vice president at Google, and Jane Fulton Suri, creative director at IDEO, a global design company that uses human behavior to design products and services.

Fulton Suri pioneered human-centered approaches to design practice, including techniques for empathic observation and experience prototyping that are employed widely in design and innovation of products and services to organizations, and strategies.

The Wisdom 2.0 conference, founded and hosted by Soren Gordhamer, explores how lives can be connected through technology, but in ways that are beneficial to a person’s well-being, effectiveness at work and useful to the world.

Gordhamer works with individuals and groups—ranging from incarcerated youth in New York to trauma workers in Rwanda, teachers in Nigeria and staff at U.S. technology companies—on living with greater mindfulness and purpose in a technology-rich age.

He invited 51 speakers to this, the fourth annual conference. Jack is among eight scholars to talk. Other speakers include Bill Ford, executive chairman of Ford Motor Co.; Arianna Huffington, president and editor-in-chief of the Huffington Post; U.S. Rep Tim Ryan, D-Ohio; and Evan Williams, co-founder of Twitter and Obvious.

Update Monday, Feb. 25: The panel now can be viewed online.