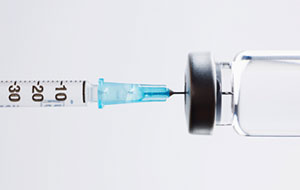 The three-year award will support research on a rapid-acting, glucose-responsive insulin by biochemistry professor Michael A. Weiss, an internationally recognized leader in insulin research for nearly a quarter century. Weiss will lead work on a form of insulin that detects when levels of the sugar-storing hormone may be too high or low, reducing the risk of hypoglycemia in diabetes patients. If the research is successful, this new type of insulin most likely would be developed through Cleveland-based Thermalin Diabetes LLC, a company Weiss founded in 2009.

National Institutes of Health-sponsored clinical trials conducted by Case Western Reserve School of Medicine and others have established that long-term complications of Type I diabetes (T1D)—such as blindness and kidney failure—could be delayed or prevented by tightly controlling the concentration of glucose (sugar) in the blood.

Such control is achieved by administering insulin—a hormone that instructs the body to remove sugar from the blood and store it for later release—with each meal to dampen the spikes in blood sugar that occur when the body digests carbohydrates.

But when too much insulin is given, the patient experiences a “low”—a hypoglycemic (low blood sugar) episode that can lead to confusion, anxiety, irritability and, with progressive severity, loss of consciousness, convulsions or even death. Preventing an insulin overdose is a challenge.

Carbohydrate consumption frequently falls short of pre-meal estimates. Patients can also drive their blood sugar levels low by being more active than expected. When either of these things occur, the insulin dose that was given before a meal can turn out to be too large and the patient becomes hypoglycemic.

With current technologies, the risk of at least mild overdosing is very real. So patients frequently underdose and as a result fail to achieve tight blood sugar control. Surveys have indicated that better blood-sugar control from more aggressive insulin therapy would be achievable if new technologies could be developed to reduce the risk of hypoglycemia.

“We are now trying to invent new, more intelligent forms of the insulin molecule that reduce the risk of overdosing,” Weiss said.

Weiss and his Case Western Reserve research team will redesign part of the insulin molecule so that it “knows” to stay at the injection site when blood sugar is low, thereby preventing the level from slipping further. This can, in principle, be accomplished by creating insulin analogs that stick inside the skin until the presence of glucose signals that it’s time for the hormone to be released.

The injected insulin analog will be intrinsically sensitive to the concentration of glucose under the skin, so that that the insulin will enter the bloodstream only as needed.

“Glucose-sensitive insulin has attracted intense interest in the past,” Weiss said. “We may have a novel solution that uses an entirely new mechanism and avoids the pitfalls confronted by other approaches.”

Robert H. Miller, the university’s vice president of research and technology management and Allen C. Holmes Professor of Neurological Diseases, said the development of smart therapies, such as the responsive insulin designed by Weiss, “is the culmination of a huge amount of basic research on the chemical structure of insulin as well as biology of diabetes. It demonstrates the power of linking the bench to business at CWRU.”

The New York-based Helmsley Charitable Trust has rapidly become one of the largest private funders of T1D initiatives. The award to Case Western Reserve is part of the Helmsley T1D Program’s Emerging Technology Initiative (ETI). The goal of the ETI is to fund earlier stage projects focused on drugs, devices or therapies that will ease the burden of managing T1D and move them down the path towards commercialization. Along with Case Western Reserve, Helmsley has awarded grants totaling more than $6.5 million through this initiative to six other organizations.

“We are pleased to support Dr. Weiss and Case Western Reserve in their vital research, which has the opportunity to make a profound impact on T1D patients’ ability to control their glucose levels,” said Eliot Brenner, director of the Helmsley Charitable Trust’s T1D Program. “This is a prime example of the type of innovative work that we have sought to fund via our Emerging Technology Initiative, through which we are applying a venture philanthropy approach to moving potentially impactful projects quickly through the pipeline of research to commercialization and, ultimately, to the patients who will benefit from these advances.”

The proposed new form of insulin is a promising development for people with T1D, a life-altering, incurable disease that affects roughly 2 million people in the United States. The disease typically strikes children and young adults, and the number of cases is rising, according to the World Health Organization.

T1D is an autoimmune disease in which a person’s own body attacks its insulin-producing cells in the pancreas. Elevated glucose levels kill cells and result in complications and ultimately death if not controlled. Diabetes patients manage the disease by constantly testing glucose levels and injecting insulin up to 10 or more times per day (or by wearing an insulin pump) to lower glucose levels when needed.

“Glucose-sensitive insulin is of great interest to the Type 1 Diabetes community because it will help patients who struggle with hypoglycemia to manage their blood sugar better and with less worry,” said Richard Berenson, Thermalin’s chief executive officer. “This grant will allow Dr. Weiss to explore some very creative ideas he has developed for new ways to tackle this problem.”

Berenson said Thermalin already is developing a portfolio of insulins invented by Weiss, each targeted to different, large subgroups of patients whose needs are not met by current products. “We see intelligent insulin as a perfect complement and addition to our product strategy,” Berenson said.