Student participation has more than doubled since 2010-11 school year 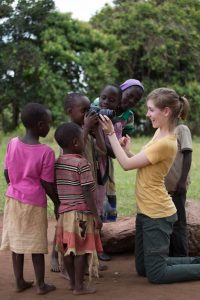 For the first time in its history, Case Western Reserve ranks among the nation’s top 40 doctorate-granting universities in the percentage of its undergraduates studying abroad, according to a new report.

With nearly 45 percent of its undergraduates studying abroad in academic year 2013-14, Case Western Reserve tied for the 20th spot with Boston University in the “Open Doors 2015 Report on International Educational Exchange.” The publication annually names the top 40 doctorate-granting universities; this year marks Case Western Reserve’s first-ever appearance on the list.

“This ranking reflects an enormous amount of effort across our entire university,” said Provost and Executive Vice President W.A. “Bud” Baeslack III. “I commend and thank everyone in the Center for International Affairs, led by David Fleshler, as well as all of the faculty, staff, students and alumni who have supported these global initiatives.”

“Case Western Reserve’s top-​20 national study-abroad ranking ​is validation—from perhaps the most highly respected international education organization—of the institution’s success in internationalizing​ our campus,” said Fleshler, associate provost for international affairs.​ “This achievement demonstrates a shift in ​the university’s culture—from one that acknowledged study abroad to one that expects our students to study abroad.”

Increasing the internationalization of the campus was a key priority of Case Western Reserve’s 2008 strategic plan, Forward Thinking. Part of implementing that goal involved increasing growing undergraduate enrollment, as well as increasing opportunities for U.S. students to spend time learning in other countries. In 2009, the university appointed Fleshler to the newly created role of associate provost, and the Center for International Affairs then followed.

Since 2007, the proportion of international undergraduates on campus has nearly quadrupled. Since 2010, study abroad participation has more than doubled, from 19 percent to nearly 45 percent in 2013-2014.

“Studying abroad not only provides an understanding of another culture and a perspective on our own, it is also a boost as students are beginning their careers,” Fleshler said. “The experience is often the difference in a student landing his or her first job, because employers like to see students who can successfully navigate new and challenging environments.”  ​