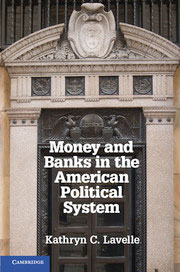 As the financial crisis of 2008 led to foreclosures, job losses and shrinking retirement funds, political scientists and economists argued over whom to blame.

“You cannot enter the debate,” she said, “unless you see the whole map and its connections.”

In Money and Banks in the American Political System, Lavelle explained the history of the political economy of finance in America, from the banking system’s growth, to new regulators to control various institutions, to the cyclical nature of recession and recovery, to how the Federal Reserve Bank and its regional banks control the flow of money and contribute to regulation nationally and internationally.

The goal, she said, is to educate, then allow “people to decide for themselves how they should fix the system going forward.”

While most countries have a monolithic banking system controlled by one regulator, the U.S. system operates under both federal and state law with different regulators for different financial functions such as the stock market, derivatives, banks and insurance companies.

“Policing the activities of banks poses a unique set of problems in the United States,” wrote Lavelle, especially with the long-held anti-government sentiment about regulation that dates to American revolutionaries protesting British taxes.

But when banks slip into decline and need a bailout, no matter where you live, “everyone is bank-dependent, from individuals to large corporations—and these banking issues impact the economy,”­ wrote Lavelle.

When that happens, Lavelle said, people get angry, and their anger is targeted toward the banking and political systems. She added that some anger stems from misunderstanding the shared complex relationship between politics and finance in the American capitalistic system.

Whether it is the Federal Reserve, or federal or state governmental regulatory agencies, these groups share one thing in common—they compete for money to keep budgets funded for their jurisdictions, she said. As a result, turf wars can arise among agencies. Also joining in the political process are the business associations, with their lobbies when proposed legislations can further or hinder the bottom-line profits.

This political structure can cause instability in the financial system.

Educated people who want answers to questions about how the government regulates finance don’t have a comprehensive guide to find them. “My hope is that this primer on finance and politics fills that need,” Lavelle said.