A scientist at Case Western Reserve University Frances Payne Bolton School of Nursing will lead a pair of studies to develop more effective treatment for symptoms of cystic fibrosis (CF), a life-threatening genetic disease that causes persistent lung infections and progressively limits the ability to breathe.

About 30,000 people in the United States (70,000 worldwide) suffer from CF, with about 1,000 new cases diagnosed annually. Most CF patients are diagnosed as newborns.

A defective gene causes a thick buildup of mucus in the lungs, pancreas and other organs of CF patients. In the lungs, the mucus clogs airways, leading to extensive damage and, eventually, respiratory failure.

CF can be treated, but there is no cure. The average lifespan is less than 40 years. 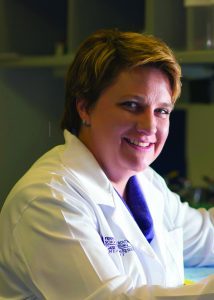 Rebecca Darrah, assistant professor at the Frances Payne Bolton School of Nursing and assistant director of Case Western Reserve’s Genetic Counseling Training Program, will direct two new studies to learn more about how gene-modifying treatment can be used to minimize the symptoms of CF.

Both research projects will begin in January.

“With these new studies,” Darrah said, “we are hoping to not only develop new treatment strategies that would benefit all CF patients, but also determine the ideal timing for other clinical interventions already in place to help patients with specific mutations.”

Data from a recent genetic survey of CF patients suggest they may benefit from medications—such as ACE inhibitors—that regulate blood pressure and fluid balance.

Scientists have found that worsening lung symptoms in CF patients are linked to variations in the genetic code for a receptor in a pathway related to high blood pressure (known as angiotensin) that restricts vessels and raises blood pressure. The researchers will try to determine if CF lung symptoms can be somewhat reduced by altering a specific component of the angiotensin pathway.

With funding from the Gilead Sciences Inc., Darrah and her team will study the effects of altering the angiotensin pathway in genetically modified mouse models. They also will determine whether giving CF mouse models medication designed to alter angiotensin signaling has a positive effect on their breathing.

“Treating chronic diseases, such as CF, can be clinically challenging because it is often unclear whether disease symptoms can be reversed or whether the best hope is just to slow the progression of the disease,” Darrah said. “With clinical trials of new drugs to correct the genetic defect that causes CF, knowing the ideal timing of this treatment is critical.”

In the second study, with a grant from the Cystic Fibrosis Foundation, mouse models of CF will undergo genetic “correction” of the mutations causing the disease when exposed to a certain drug.

In this study, researchers hope to determine:

The findings are expected to help design more effective clinical trials by providing important data on CF lung symptoms that are correctable and reversible, and the timing necessary to achieve these clinical benefits.