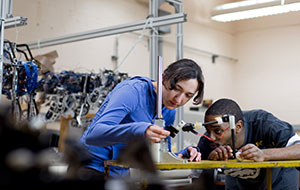 Case Western Reserve University, NASA Glenn Research Center and software-maker PTC are teaming up to put students to work on real aerospace projects, manufacturing problems and more, with tools used in the industry.

Case Western Reserve is the second university nationwide to become a host of NASA’s Strategic Partners for the Advancement of Collaborative Engineering (SPACE) program. The program is designed to help train the next generation of engineers and scientists.

PTC will provide tools to take on projects from NASA and, in the future, other industries in Northeast Ohio and around the United States. For the SPACE program, PTC is donating PTC Windchill software for Product Lifecycle Management requirements and PTC Creo software for Computer Assisted Design, along with computer hardware servers. The software is used by 27,000 businesses in rapidly evolving, globally distributed manufacturing industries worldwide. 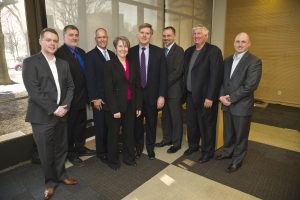 “The Case Western Reserve-NASA-PTC SPACE program will involve partnerships with universities across the country,” said Iwan Alexander, chair of aerospace and mechanical engineering at Case Western Reserve, who leads the program at the university. “This is expected to lead to joint projects with team members from different universities, collaborating on designs of hardware and missions relevant to NASA’s goals.

“Key to this multi-university collaboration is the PTC software packages,” he continued. “These will provide students a platform upon which to build collaborations across design, testing and simulation of new product concepts.”

Other universities that will join in the SPACE program will be announced at a later time.

Case Western Reserve has enjoyed a strong relationship with NASA and with NASA Glenn, particularly since T. Keith Glennan, who was then president of the Case Institute of Technology, became the first NASA director in 1958, Alexander said. This announcement builds on the tradition of Case Western Reserve and NASA working together.

The university and NASA already have begun working on SPACE projects with funding from NASA Glenn.

Students have been designing:

A new class, which began in January, uses PTC’s WindChill software as a product lifecycle tool in all stages of the design cycle.

“Engineering jobs have changed,” said John Stuart, senior vice president of education at PTC, which is based in Needham, Mass. “The globalization of the design process, increased product complexity and increased regulatory pressure has meant that an understanding of PLM or the importance of collaboration has become a necessary skill for graduates. PTC is committed to supporting individuals and institutions dedicated to delivering a modern product development education.”

Michael Grieves, Product Lifecycle Management author and a consultant to NASA, helped arrange PTC’s donation and the creation of the SPACE program at CWRU.

“Students who get involved with meaningful projects and the software tools to enable those projects earlier in their education are better equipped to utilize that knowledge in their careers,” said Grieves, who earned his doctorate in management at CWRU’s Weatherhead School of Management. “These are the people who will utilize digital technologies to create, manufacture and get to market the next generation of products.”

The first SPACE program was established at the University of Alabama in Huntsville. “Case Western Reserve’s program will be similar, but will be tailored to the needs and wishes of Case,” Grieves said.

Boundary Systems, a local solutions provider for companies that design and manufacture products, supported the initiative by offering consulting, implementation and training to faculty members. Ian Kimbrell, president of Boundary Systems said: “As an alumnus of the Department of Mechanical Engineering at Case Western Reserve University, I’m personally delighted to be a part of this exciting program. As a local company, we are proud to make this kind of investment in the future of the manufacturing industry we serve here in Cleveland.”

Case Western Reserve is among the universities and businesses that are leading the National Additive Manufacturing Innovation Institute, based in Youngstown. The institute is the pilot effort of an ambitious initiative to transform manufacturing across the country, funded by a $30 million federal grant and another $40 million in contributions from institute members.

The university plans to expand the SPACE program as it develops, and put students to work with other industries and businesses on product development.