Music conference to focus on importance of drumming 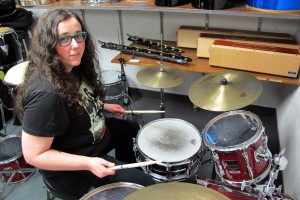 Mandy Smith, doctoral student in music, will give a presentation at the drumming conference. She has played the drums since she was 12 years old.

Case Western Reserve University’s Department of Music will give a nod to rock and jazz drummers during the Center for Popular Music Studies’ conference, “Drumming,” on Saturday, April 26, from 10 a.m. to 5:30 p.m., in Harkness Chapel.

The conference, free and open to the public, presents many acclaimed musicians among the speakers. The event concludes with a concert, featuring Mark Ferber, a freelance drummer from New York City, on drums; CWRU’s award-winning jazz pianist and music department chair David Ake; and Marty Block, a Cleveland area jazz bassist on bass.

“Drumming is the great understudied and underappreciated side of popular music,” said Robert Walser, professor and director of the Center for Popular Music Studies. “Drums are always there, but few people have actually tried to explain why or how they work.”

Walser is directing the conference and also will give a talk, called “A Typology of Drum Fills.”

Case Western Reserve graduate student Mandy Smith will open the conference with her presentation, “’The Rhythm is Gonna Get You:’ The Primitive vs. the Virtuosic in Rock Drumming.”