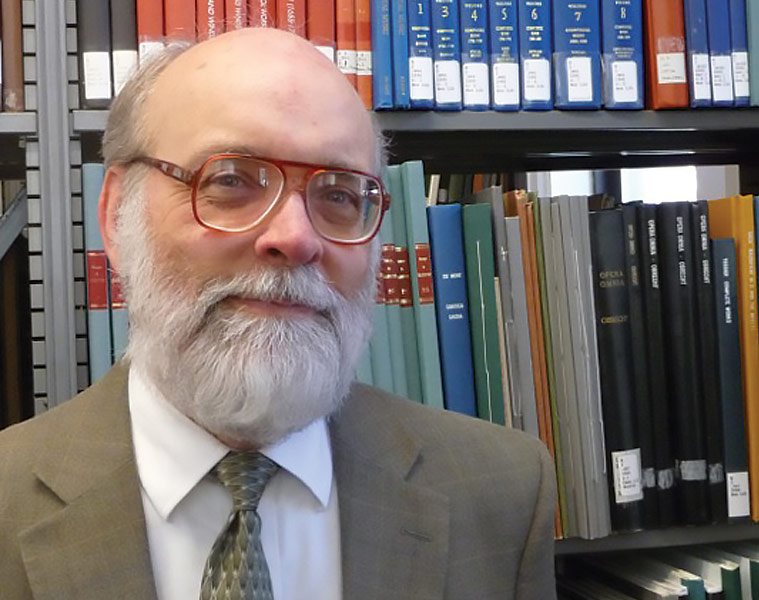 During many lunch hours, the gentle sounds of the lute would emanate from the first-floor Haydn Hall office of Stephen H. Toombs, who often used that time to practice the instrument he so loved.

“Those quiet sounds seemed as much a part of the building as the bricks on the wall,” said David Rothenberg, chair of the Department of Music, who began playing the lute a few years ago and would frequently stop by Toombs’ office to chat about their instruments and repertoire.

“It is those conversations I’ll miss the most on a personal level,” Rothenberg said, “but the entire musical community at Case Western Reserve University will miss the brilliant librarianship he provided for as long as anyone here can remember.”

Toombs, director of Kulas Music Library—a branch of Kelvin Smith Library—died Wednesday. He was 65. He and his wife of 31 years, Jean, lived in Cleveland Heights.

“For me, his defining characteristic was quiet generosity,” Rothenberg said. “While never calling attention to himself, he worked tirelessly to help our faculty and students make use of the resources in our music library. He was an invaluable resource and will be missed dearly.”

Colleagues remembered Toombs, a music librarian at the university for 28 years, for his intellect, creativity and dedication to helping students and faculty with their research.

“Stephen was greatly esteemed because he always brought intelligence, incisiveness, wit, talent and creativity to everything he did,” said Arnold Hirshon, associate provost and university librarian. “He was a man of exceptional character, ever thoughtful and articulate, infinitely caring, wonderfully talented as a musician, extremely knowledgeable and endlessly dedicated to sharing his knowledge with the faculty and students with whom he worked on behalf of the Kelvin Smith Library.”

At Case Western Reserve since 1988, Toombs was also research services librarian for the performing arts (music, dance and theater) and classics, responsible for developing the collections, providing reference services and instruction in library resources, and acting as the library’s liaison to those departments.

A self-described vegan with a keen interest in science fiction, Toombs grew up in St. Louis. He earned degrees in music and historical musicology from Washington University in St. Louis; in librarianship from theUniversity of Illinois at Urbana-Champaign; and in performance from the Dutch Royal Conservatory in The Hague.

He was a professional lutenist and played baroque guitar, with a special interest in chamber music and song of the 17th century. He directed the early music quartet, Ensemble Lautenkonzert, for 15 years.

Tim Robson, associate director for academic engagement services at the library, worked for almost 30 years with Toombs, who succeeded him at the Kulas Music Library. Robson described Toombs’ thoroughness and excellence in preparation for every assignment as “legendary.”

“Apart from being library colleagues,” Robson said, “our careers shared another parallel path, as performing musicians. As a church organist/director of music, I was able to present Stephen in performance on numerous occasions.”

Robson recalled how, several years ago, Toombs’ car was stolen—with his lute inside it. Toombs was devastated, not just for the loss of his instrument, but that he had to wait several years for a replacement instrument to be built by his favorite luthier.

“It was indeed a happy occasion when the new one finally arrived,” Robson said.

Jeffrey Quick, a library assistant in the music library, considered Toombs a mentor and friend. Toombs had hired him in 1998 and, as his immediate superior for several years, set a high standard.

“He instilled rigorous standards for cataloging, and arranged for me to go to the Indiana University music cataloging workshop,” Quick recalled. “For my first anniversary as a cataloger, he presented me with a framed copy of one of my first pieces of original cataloging, a set of Polish band parts, which still hangs in my office.”