43 years of distinguished service covered multiple areas, from the physics classroom to athletics to planning and management

A love of science—especially physics—drew young Arthur P. Leary from suburban Philadelphia to Case Western Reserve in 1941. Soon after, the university itself captured his passion, leading to a career that spanned more than four decades and involved multiple campus roles.

Except for two years of service in the U.S. Navy during World War II, Leary maintained an association with the university from his undergraduate enrollment until his retirement in 1989 and even beyond, as administrative vice president emeritus and associate professor emeritus of physical education and athletics. 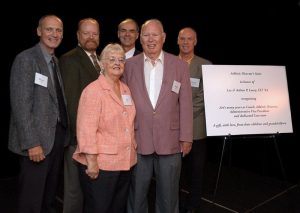 Lee and Art Leary, with their sons (from left) Bruce, Curt, Pearce and Doug.

Leary, of Chagrin Falls, died Wednesday, the 70th anniversary of his marriage to Dorothy “Lee.” In addition to his widow, Leary is survived by his sons, Pearce, Bruce, Doug and Curt, 10 grandchildren and 11 great grandchildren. He was 92.

“Art Leary is a legend at Case Western Reserve, as much for the dedication and energy he brought to our university as for his exceptional character and integrity,” said Vice President for Student Affairs Lou Stark. “Our award for athletes who demonstrate leadership, academic excellence and sportsmanship bears Art’s name, and it is no accident that the honor is among those most prized by our students. He will be deeply missed, but his legacy will continue to influence our campus for generations to come.”

Few at Case Western Reserve University served in as many and as varied capacities as Leary, whose first appointment at the university was in 1946 as a graduate assistant in the physics department. He later served as assistant to the dean of faculty, assistant to the president, director of physical education and athletics, business manager, and director of budgets, among other positions.

Upon his retirement, the Board of Trustees approved a resolution stating how Leary had “touched the lives of literally thousands of students, faculty and staff, especially in times of change or difficulty,” and the key roles he played “in increasing the university’s national visibility and the quality of student life.”

As a student, Leary earned bachelor’s and master’s degrees in physics in 1944 and 1951, respectively, and worked in the university observatory to help cover tuition. He enjoyed a standout career on the football team, where No. 19 played both center and wide receiver. He returned to help coach football for head coach Ray Ride and coached tennis while also teaching physics. 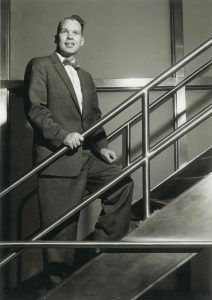 At age 29, Leary was named athletic director, a position he held for nine years. During his tenure, he was responsible for much of the planning for the Emerson Physical Education Center.

“He created a great camaraderie of coaches who stayed for decades,” said Doug Leary (WRC ’76), who, along with older brother Pearce (CIT ’71, LAW ’74), was inducted into the university’s athletics hall of fame for their achievements in cross country and track.

“Heck of a guy to work for, I’ll tell you that,” said Mooney, whom Leary hired as an assistant football coach and intramurals director in 1955.

The two maintained a friendship ever since, often lunching together at Mama Santa’s or the old Theresa’s Italian Restaurant in Little Italy—even after Leary had moved on from directing athletics to other administrative responsibilities.

“He treated everybody extremely well and got the most out of people,” recalled Mooney, also a member of the athletic hall of fame. “He was fair and honest and truthful. When he made a decision, you knew it was probably the right decision.”

The athletic administrative wing of the university’s Wyant Athletic and Wellness Center is named for Lee and Art Leary, honoring his service to the university. 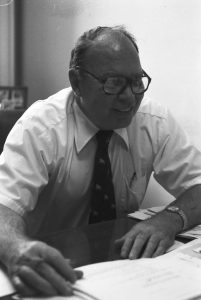 In 1962, Leary was promoted from athletic director to assistant to Case Institute of Technology President T. Keith Glennan, NASA’s first administrator and a man whom Doug Leary described as “my dad’s greatest mentor.”

It was as an administrator, however, that Leary established a record of leadership, service and achievement that few could match. In 1970, he was named assistant vice president, and was elected assistant treasurer and an officer of the corporation a year later. He became associate vice president in 1973, and, in 1980, was appointed administrative vice president, responsible for financial and business management and general operations.

To honor his distinguished service and commitment to the university, the Arthur P. Leary Endowment Fund was established in 1986 for faculty development in teaching and coaching. Gifts can be sent to: Arthur P. Leary Athletic Endowment, Case Western Reserve University, Adelbert Hall 409, 10900 Euclid Ave., Cleveland, Ohio, 44106-7091.

“He takes with him rich memories of the development of one of the nation’s leading universities,” the Board of Trustees resolution acknowledged at Leary’s retirement. “He leaves a record of accomplishment and loyal service.”

A sentiment that may mean even more in his passing.