Katelyn Pierce has wanted to be an attorney since she was a child.

For Galen Baynes, lawyering came to mind only after he earned his bachelor’s degree.

Now, as third-year law students at Case Western Reserve, they are gaining unusual real-world experience in the profession they hope to practice: They are challenging the federal government. 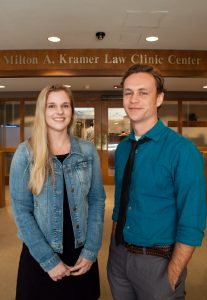 The pair prepared and wrote a complaint that seeks to force the Federal Bureau of Investigation and the U.S. Department of Homeland Security to release records involving surveillance of the Movement for Black Lives and its demonstrations.

“Secrecy should not be permitted to shield potential constitutional violations,” states the complaint, filed Thursday in the U.S. District Court of the Southern District of New York. “Only through the release of agency records can the public understand and analyze the legitimacy of Defendants’ surveillance and monitoring.”

The New York-based Center for Constitutional Rights (CCR) and Color of Change, a national online organization dedicated to racial justice, are the plaintiffs in the matter. CCR attorneys, the law students and Associate Professor Avidan Cover of the school’s Milton A. Kramer Law Clinic Center jointly filed the complaint.

The students’ involvement stems from the law school’s requirement that all third-year students participate in a hands-on capstone experience that lasts at least a semester. In some instances, students meet this standard through work at a law firm, nonprofit or government agency, while others work on cases through the law clinic—with faculty supervision. The law clinic handles more than 100 cases a year, providing about 16,000 hours of pro bono legal work.

Baynes and Pierce each chose the clinic, specifically the option that Cover leads involving civil rights and human rights.

“I like the idea of using the law to help people,” said Pierce, of Shreveport, Louisiana, who earned undergraduate degrees in political science and philosophy from Spring Hill College in Alabama. “That’s what it boils down to for me.”

Baynes, a Long Island, New York, native, said he became interested in social advocacy law after earning a degree in international studies from Minnesota’s Macalester College. Five years after graduating—and the year before he started law school—he worked as an investigator with the New York City Civilian Complaint Review Board. That experience influenced his thoughts on the litigation.

The opportunity to work on this case emerged from a connection Cover had at the center. Once they learned of it, Baynes and Pierce asked to take the lead on writing the initial draft—despite their limited knowledge of the law that serves as the basis of the complaint, the Freedom of Information Act (FOIA).

“I had no experience with FOIA litigation,” Pierce said. “It’s been a steep learning curve.”

The two started with a beginner’s guide to FOIA law that Cover provided, and then began searching for relevant precedents within existing case law. The process also involved several rounds of conversation and email correspondence with their clients—not to mention rewrites and editing from Cover and their clients.

The complaint references numerous documents, including original FOIA requests as well as media coverage of law enforcement monitoring of individual protests.  The two estimate they spent five to 10 hours a week on the project since the semester began in August—time spent on top of their other courses and other clinic cases.

The lawsuit contends federal and local law enforcement have used counterterrorism tactics to observe the Movement for Black Lives protests and protesters since August 2014 in Ferguson, Missouri, during protests following the police killing of 18-year-old Michael Brown.

Since then, according to the lawsuit, federal agencies have coordinated with state and local police departments nationally to monitor vigils, marches and social media accounts protesting the deaths and claims of police brutality against African-Americans by law enforcement.

The lawsuit alleges the surveillance violates the protection of political speech under the First Amendment and invades the protesters’ privacy, thus also violating the Fourth Amendment. The plaintiffs claim the FBI and DHS have not provided public records documenting the surveillance, as requested through FOIA. The lawsuit seeks release of the records.

“Galen and Katelyn’s efforts on behalf of their clients exemplify the very best about the Case Western Reserve law experience,” Cover said. “Diligent writing and research, dedication, creativity and real-world lawyer experience. I couldn’t be prouder.”