Esteban Salvemini, manager of the engineering and design studio at New York University Abu Dhabi, donned a welding helmet, flipped down the mask, grabbed a torch and began wielding it on a slab of aluminum.

A representative with Cleveland-based Lincoln Electric demonstrates a virtual reality welding simulator to an attendee of International Symposium on Academic Makerspaces 2017, being held this week at Case Western Reserve University.
All photos by Daniel Robison.

The tool was a virtual-reality welding machine that Cleveland-based Lincoln Electric uses for training. The quality of Salvemini’s handiwork was displayed on a large video screen and scored in real time for all to see. The high-tech “machine shop” stood among a line of vendor exhibits on the second floor of the Tinkham Veale University Center, where people immersed in higher education’s emerging role in the maker movement and innovation gathered this week from all over the world. 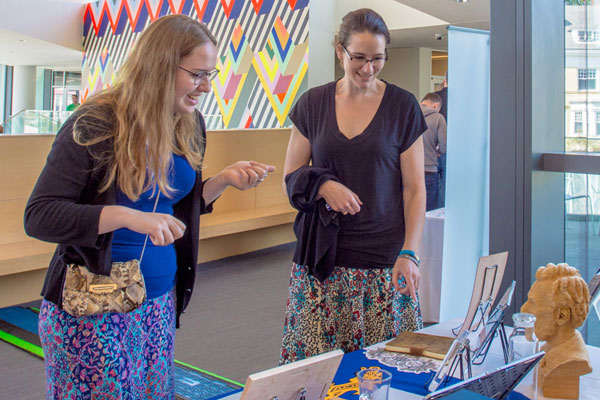 Anna Risher, an ISAM volunteer and CWRU employee, and Michelle Lampton, also of CWRU, chat about items cut with a laser, including a bust of Abraham Lincoln.

About 350 attendees from across the country and such locales as Australia, Pakistan, South Africa, Sweden and Switzerland came to Northeast Ohio to share ideas on what contributes to a successful makerspace—and how innovation ultimately energizes student creators and stimulates important economic development.

“We want to start companies. We want people to get involved in entrepreneurial activities,” said university alumnus and trustee Larry Sears, one of the earliest supporters of Case Western Reserve’s makerspace, the Larry Sears and Sally Zlotnick Sears think[box] in the Richey Mixon building. “It’s about jobs, simple as that.”

The symposium’s sessions cover a range of topics, from how to fund and sustain a makerspace to management and staffing, space design and workflow. This year’s gathering is the second of the new university collaboration; the inaugural ISAM event took place at MIT.

“It’s getting everybody who does innovation space together,” said David Ecker, director of iCreate at Stony Brook University in New York.

Ecker said he was especially interested in taking back with him ideas that allow faculty to infuse opportunities for innovation in their classrooms, as well as suggestions discussed during a session on empowering women in engineering.

A trade representative with Washington-based OMAX explains the company’s latest model of precision waterjet cutter, which shoots a stream of finely-ground minerals in a stream of water to slice through metals and other materials, at the International Symposium on Academic Makerspaces 2017 at Case Western Reserve University.

The symposium also gives makerspace leaders an opportunity to learn more about one another’s safety practices and equipment purchases—as well as emerging technologies to support their efforts. Not far from Lincoln Electric’s interactive exhibit, for example, other companies demonstrated their latest offerings in 3-D printing, milling machines, high-powered waterjets for cutting and shaping plastics and metals and more.

Of course, tours of the seven-story, 50,000-square-foot Sears think[box] also are part of the agenda.

Within the maker movement, Sears think[box] is considered a leading example of what’s attainable. It stands out not only for the depth and breadth of the machinery available (including 3-D printers, circuit-board routers, laser cutters, welding equipment, some of which was donated by Lincoln Electric), but also for its design, which guides users floor by floor through the entire making process, from whiteboard brainstorming to fabrication to legally protecting an idea to taking a product to market.

Plus, the space is open to the public—as well as the entire campus community.