Case Western Reserve University and the Cleveland Museum of Art today announced an innovative urban landscape project that will connect the western edge of the university’s main campus to its West Campus parcel, home of The Milton and Tamar Maltz Performing Arts Center at The Temple – Tifereth Israel.

Stretching from the Tinkham Veale University Center through to East 101st Street, the Nord Family Greenway will include an event lawn, an amphitheater with sloped grass steps, a paved walkway and a cantilevered bridge and overlook of Doan Brook. Designed by Sasaki Associates, the 430,000-square-foot commons exemplifies the ideals of connection and community central to Case Western Reserve’s 2015 master plan.

“This open civic space builds upon the extraordinary vision of those responsible for some of Cleveland’s most striking physical landmarks,” President Barbara R. Snyder said. “We are immensely grateful to the museum for its partnership, and to our donors for their support in helping us to realize a truly inspiring vision.”

Among the project’s individual supporters are an Alumnae Trustee who launched the fundraising for the project with a $3 million gift. The Trustee, who prefers to remain anonymous, was attracted by a beautiful green gathering space that would serve both as a connector for the university’s campus and for the community with its museums.

In addition, longtime supporters of the university, the Eric and Jane Nord Family, provided the lead naming gift for the project. The family previously provided major gifts to programs in engineering and the humanities, as well as buildings that house the disciplines. This commitment marks the Nord family’s first philanthropic engagement in an outdoor landscape project.

Cleveland Museum of Art Director and President William M. Griswold said the project will beautifully complement the Fine Arts Garden designed by the Olmsted Brothers landscaping firm, which features both Wade Lagoon and the “Fountain of Waters” created by artist Chester Beach.

“Launching this project as the museum celebrates its 100th anniversary provides a wonderful opportunity to reflect upon our founders’ commitment to the City of Cleveland,” Griswold said. “As we usher in our second century, we eagerly anticipate the opening of a grand public space, heralding a bright future characterized by collaboration and a profound commitment to the diverse community that both we and our colleagues at the university serve.” 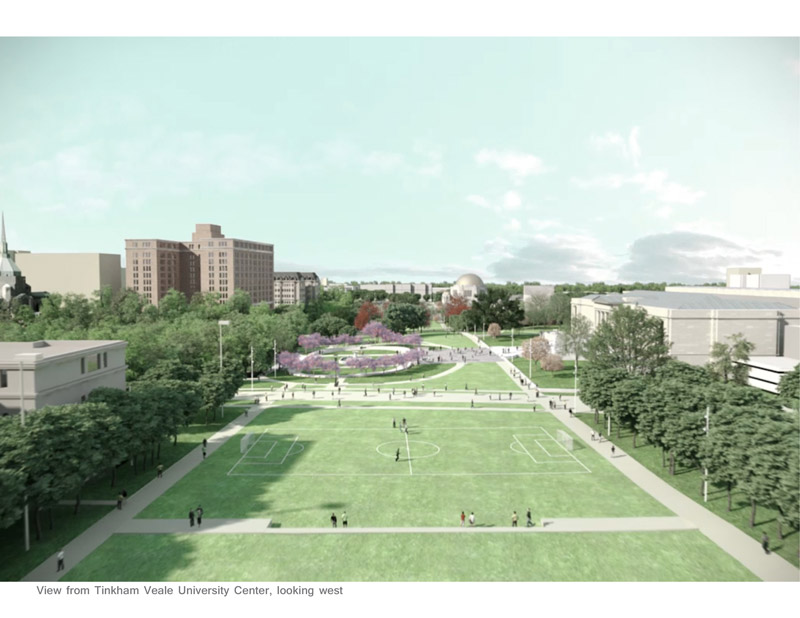 To date, the university has raised $15 million for the project. This amount will allow construction to begin, but donors still are being sought to contribute to an endowment to assure its upkeep and to support needed enhancements over time.

The connector’s roots date back to 2010, when Case Western Reserve first announced the proposed performing arts project with lead donors Milton and Tamar Maltz. At the time, no direct path led from the university’s main campus to the Temple, and even indirect ones involved crossing multiple busy streets. As a result, talk quickly turned to construction of a pedestrian bridge spanning Martin Luther King Jr. Boulevard. One proposal featured a lean, winding structure to connect the main and West campuses.

Optimizing the connection between the campus and adjacent neighborhoods has been the focus of the Cleveland Foundation’s long-time support of this project, including sponsoring a competition among leading architectural firms to design the space with community integration top of mind. Today the foundation announced an additional $1 million grant to support the greenway project and a neighborhood engagement strategy.

“This project embodies the core mission of our broader Greater University Circle Initiative to better connect residents to the economic and cultural resources of University Circle,” said Cleveland Foundation President and CEO Ronn Richard. “By reimagining one of Cleveland’s most beloved assets, Rockefeller Park, in such a creative, thoughtful way, this project will redefine placemaking in this neighborhood and help build a stronger sense of community for generations to come.” 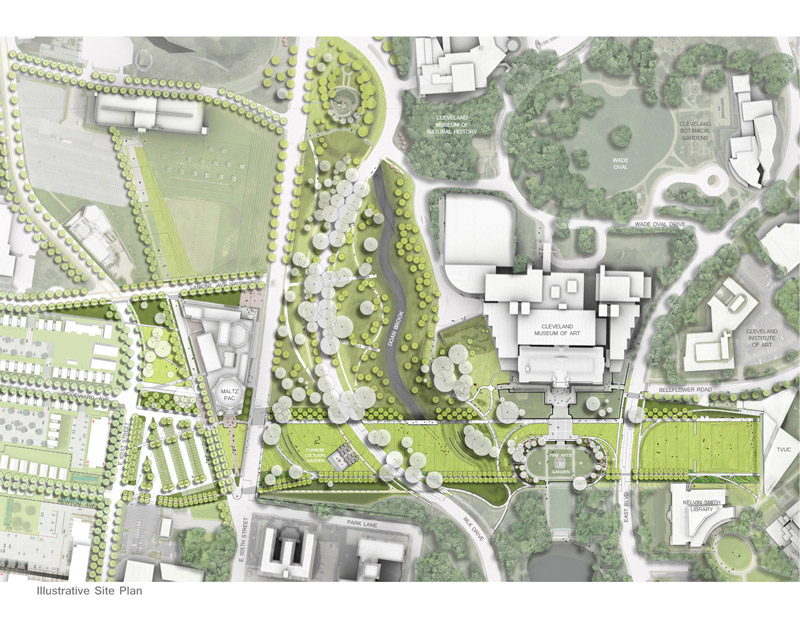 While other participants presented a range of impressive designs for bridges, Sasaki instead offered its bold greenway concept instead. Not only would the open space provide additional natural beauty to the area, Sasaki’s representatives explained, but it also would be less expensive to create and maintain—even as it served many more functions than an elevated walkway ever could.

“We challenged ourselves to establish a bold, yet responsible vision of a clear and continuous landscape structure—framing the site’s significant architectural achievements and rehabilitating the historic landscape,” the firm said in a prepared statement. “We also set out to weave these broader ambitions with accessible and intuitive pedestrian circulation, new transitional gardens, and flexible civic-scale spaces that welcome a range of community activities.”

The Boston-based firm drew on examples ranging from the iconic Lawn at the University of Virginia (UVA) to the historic Killian Court at the Massachusetts Institute of Technology. Each is home to annual commencement exercises as well as a range of less-formal activities. In 2014, the American Planning Association named the green at the heart of UVA’s Academical Village one of the nation’s 10 Great Public Spaces.

Pending city approvals in the coming weeks, construction will begin this fall, even as the university continues to seek commitments to support ongoing maintenance and improvements for the space, which is roughly equal in length to six professional football fields—including end zones. 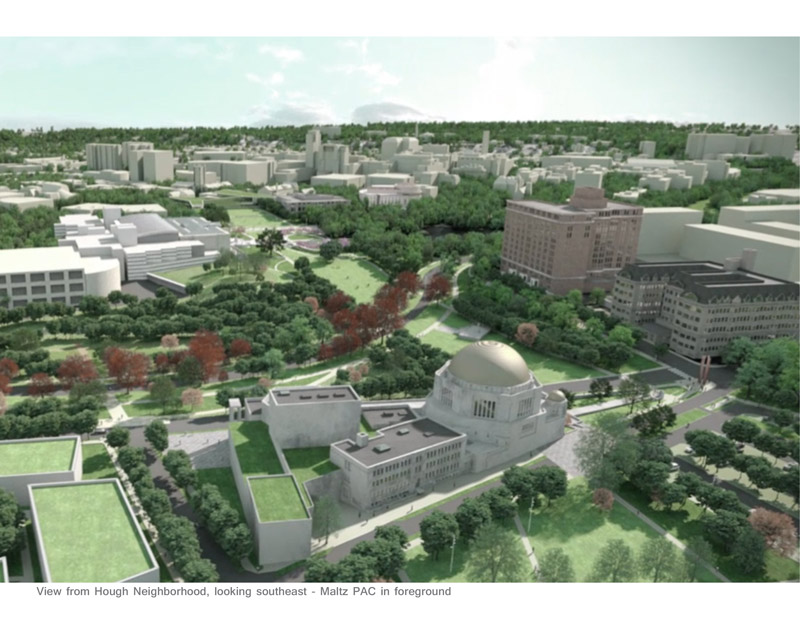 The Nord Family Greenway is expected to welcome both official events and spontaneous gatherings, yet also offers even greater potential. As Sasaki noted in its early proposals, this space can connect the university’s main and west campus, the museum and the campus, University Circle and the Hough neighborhood, and the campus and greater Cleveland.

Since Case Western Reserve selected Sasaki, university and museum officials have worked closely with multiple agencies and organizations to assess the project’s feasibility—in particular with regard to roadways and watersheds. The city of Cleveland, the Northeast Ohio Regional Sewer District and the Doan Brook Watershed Partners all have provided invaluable insight and support. LAND Studio, Holden Parks Trust, Cleveland Metroparks, the Fine Arts Garden Commission and University Circle Inc. also have engaged productively with the project.

“Even the planning and preparation for this project has drawn people together,” President Snyder said. “The ongoing dialogues have been enormously generative and exciting, and we cannot wait to see how these conversations evolve and expand in the coming months.”