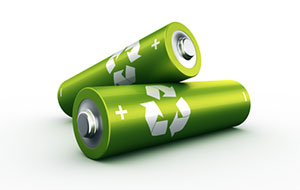 A Department of Energy agency that funds high-risk, high-payoff research, has awarded engineers at Case Western Reserve University $567,805 to develop a “rustbelt” battery with unprecedented flexibility and utility.

For more than year, the researchers have been investigating ways to build a flow battery primarily using water and iron. A flow battery is essentially an unwrapped battery that can be scaled up to hold and supply electricity to a home or an entire community.

In addition to using cheap, plentiful and environmentally friendly materials, the battery is designed to improve the efficiency of the power grid and accelerate the addition of solar and wind power supplies.

The project was one of 66 funded by the DOE’s Advanced Research Projects Agency – Energy in the round of awards announced last week, federal officials said. The battery could enhance the nation’s economic and energy security and help the U.S. develop and deploy advanced energy technologies—two of ARPA-E’s goals.

“You can use the analogy of a car engine,” said Robert Savinell, professor of chemical engineering and the project leader. “If you need more horsepower, you need a bigger engine, but the range is limited by the gas tank. To add more range, you add another gas tank.”

The researchers plan to add another tank and some new technology to take advantage of the added storage space in their iron flow battery.

The design would enable them to increase the power density, which in turn drives down the cost of operation. At the same time, the new design eliminates the problem of decreased battery discharge time. Think again of the car: an engine delivering 400 horsepower will go through 4 gallons of fuel faster than the same engine delivering 200 horsepower.

By extending the discharge time as needed, the battery would be more useful for a broader range of applications, including storing energy from wind turbines and solar panels and supplying energy when wind wanes and the sun sets. This version of the rustbelt battery could be integrated into a smart grid—charging up when use is low, then adding electricity when demand is high—for industrial and home energy supplies and more.

Due to its flexibility, this new design could be a useful alternative to current storage technologies, such as pumped hydro and compressed air systems, which require large water supplies and land with mixed elevations, or access to airtight caverns.

The batteries, which can be placed almost anywhere, also could replace “peak power plants” that suppliers turn on, burning fossil fuels or biomaterial to produce power when peak demands exceed the available energy on the grid. The batteries could thereby reduce emissions.

In standard batteries, power and energy densities are limited by wrapping all the materials used to convert chemical energy to electrical energy inside a single cell. The electrodes, which are part of the fuel, are consumed over time, leading to performance loss.

In flow batteries, chemical reactants used to produce electrical energy are stored in two tanks and the electrodes, which are not used as fuel, are housed in a separate chamber. Reactants are pumped through the cell stack and electrons are delivered in one direction to charge the battery and the other direction to discharge the system.

This new battery would exchange the conventional solid electrode in the negative half of the battery cell with a slurry that can be used to help convert chemical energy to electrical and vice-versa. As much slurry as needed can be pumped through the negative chamber and stored in a separate tank. The volume stored determines energy storage capacity, independent of the power density, or, back to the car, how hard you’re driving.

Savinell is working with Jesse Wainright, a fellow chemical engineering professor at Case School of Engineering, and Mirko F. Antloga, director of the university’s Electrochemical Engineering and Energy Laboratory.

Their goal is to devise a slurry that enables the battery to discharge at least 90 percent of the energy that it takes to charge and provide an energy storage efficiency of better than 77 percent.

The researchers say the need is growing rapidly and point to studies that forecast the market for grid-level storage will exceed $228 billion over the next decade.

The most common flow batteries are based on vanadium, a metal mined primarily in Russia, China and South Africa. The form used in batteries has recently cost about $5 to $15 per pound. Iron is plentiful in the U.S. A form useful for a flow battery has recently been selling for less than 30 cents per pound.

Vanadium batteries use highly corrosive sulfuric acid for the electrolyte. Because flow battery tanks can be the size of a freight train car or several of them, the researchers plan to use a benign electrolyte with a pH of about 4, for the safety of workers operating or maintaining them.