As a 24-year-old attorney—one of few African-American lawyers in his home state of Alabama in 1955—Fred Gray would meet with a department store employee over lunch and discuss her frustrations as a black woman riding the city’s segregated buses. And he’d counsel her about what she might do if asked to give up her seat to a white passenger.

The woman was civil rights activist Rosa Parks, who was arrested for refusing to do just that, triggering a citywide bus boycott and a nationwide effort to end segregation of public facilities. 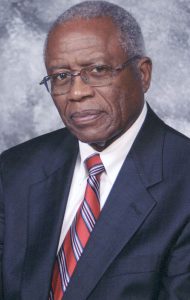 Gray, still a practicing lawyer at age 86, will address the university’s soon-to-be graduates on Sunday, May 21, when they gather for commencement at 9:30 a.m. in the Veale Convocation, Recreation and Athletic Center. For more information about the event, please visit case.edu/commencement/.

“Fred Gray exemplifies the best of Case Western Reserve. He used the knowledge he gained on our campus to pursue equality and justice with remarkable passion—and effectiveness,” President Barbara R. Snyder said. “His life offers many lessons, and we are honored that he will share them at our 2017 commencement.”

Gray earned his law degree in 1954 from what is now Case Western Reserve University and became entrenched on the front lines of the 1960s Civil Rights Movement, representing not just Parks, but Martin Luther King Jr. and victims of the Tuskegee Syphilis Study, among other historic, high-profile clients.

He was on a mission—as he has often described it—“to destroy everything segregated that I could find.”

Gray, who also received an honorary degree from Case Western Reserve in 1992 and serves as an honorary and emeriti trustee, devoted his life’s work to that mission after returning home to Montgomery, Alabama, from Cleveland as a freshly minted lawyer.

He defended Parks and Claudette Colvin, who also refused to relinquish her bus seat to a white passenger months before even Parks did. He worked alongside King on voting rights and school integration. He sued the federal government on behalf of the hundreds of African-American men exploited by the Tuskegee, Alabama, syphilis experiment in the 1930s.

The first black president of the Alabama Bar Association, Gray argued before the Supreme Court the unconstitutionality of Tuskegee-based rezoning laws created by local officials that would leave African-Americans out of elections. He also was one of the first two African-Americans to serve in the Alabama Legislature since Reconstruction.

In another Supreme Court case, Gray worked to allow the NAACP to organize in Alabama after the group was outlawed in the state. Gray also was instrumental in leading cases and filing lawsuits that led to the desegregation of all public institutions of higher learning, along with the creation of an order requesting the integration of elementary and secondary schools.

The author of two books, Bus Ride to Justice and The Tuskegee Syphilis Study, he also has been the moving force behind the Tuskegee Human and Civil Rights Multicultural Center, which illuminates the history and contributions of the diverse groups who have lived in and around Macon County, Alabama.