The Dittrick Medical History Center & Museum will hold a Conversations series event on the topic of lead poisoning and industrial damages Thursday, Nov. 17, at 7 p.m. at the Cleveland Museum of Contemporary Art (MOCA).

MOCA exhibit curators and Scott Frank, director of the Master of Public Health program, will team up to lead a conversation titled “Industrial Damages: Lead Poisoning’s Long Legacy and Industry’s Role in Decay.” 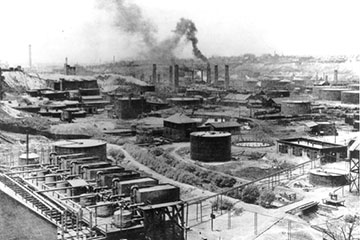 When we hear the term “lead poisoning,” today we might think of Flint, Michigan, and the ecological disaster unfolding. But in fact, many cities still suffer from industrial damages, and Cleveland is no exception. After all, we are the home of the burning river—and the “Cleveland Disaster” (a liquid gas fire that claimed many lives).

With this astonishing growth, Clevelanders faced profound challenges making the city a healthy place to live. Industry improved the city’s status, but polluted the water, land and air—and introduced lead into the ecosystem.

As so often happens, poor, urban workers suffered most. What did Clevelanders do to combat this problem? And in what ways are we still paying for those years of dumping and drainage—socially, medically and economically?

Come learn about an industrial legacy of decay that we still battle today, and about the ways Cleveland sought to rise again from the ashes.

The lecture, free with admission to MOCA, will coincide with a special exhibit by Anders Ruhwald titled “Unit 1: 3583 Dubois,” which addresses Detroit, destruction and the loss of place and history.

3583 Dubois St. in Detroit no longer exists. While the dilapidated 7,000-square-foot brick apartment building at this location still stands, the city has reassigned its address as 2170 Mack Ave. It is a subtle change, but one that underscores a metaphoric loss of this place’s history.

Like so many in Detroit and cities like it, this abandoned building holds memories waiting to be erased or revived. In his installation, Unit 1: 3583 Dubois, Ruhwald repositions the building’s identity, intertwining its past, present and future. The show runs through Jan. 8.

Learn more about the exhibition at mocacleveland.org/exhibitions/anders-ruhwald-unit-1-3583-dubois.

Register online for this event.