A conversation with The Book of Revelation: A Biography author and religious studies professor Timothy Beal

While growing up in Alaska, Timothy Beal was steeped in a conservative evangelical community with a fondness and fear of Revelation, the last book of the Bible offering a potent brew of hellfire and redemption through a thick tangle of verses violent, bewildering and poetic.

By adulthood, Beal—chair of the Department of Religious Studies at Case Western Reserve University—had chosen another path for practicing his faith, but a fascination and residue remained from Revelation’s puzzling mix of stories, images and mysterious origins.

As Beal writes in the prologue of his new book, The Book of Revelation: A Biography, published in October by Princeton University Press:

I got lost in all the overwhelmingly graphic descriptions of bloody, incredibly destructive battles involving myriad angels, gods, and monsters, all of whom I assumed carried symbolic meanings that were beyond my powers of decryption.

Writing this project proved both a personal reckoning of his own relationship with Revelation and a dive into unknown territory for an academic and researcher with a dozen books to his name—many about aspects and origins of the Bible.

Beal, also the Florence Harkness Professor of Religion, sat down with The Daily to discuss.

The conversation has been edited for length.

How did your personal history with Revelation influence your decision to write about it? 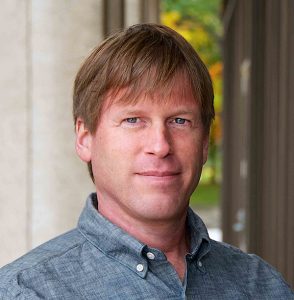 In the 1970s and ’80s, when I was growing up, there was a healthy cottage industry of books and movies—many that catered to conservative Christians—that used Revelation to interpret or decode what was happening in the world, politically or in the news. And there were cultural phenomena, such as credit card numbers starting with 666, that some were too eager to portray as signs of a coming apocalypse.

While this was my first encounter with Revelation, it was just another example of the book being in our water and our air. You see this many times throughout history, how it’s gotten new currency, new leases on life. It taps our apocalyptic imaginations. It’s an effective monster-making machine that you can plug almost anybody into and they come out looking like a devil or a beast.

Even if we’ve never read the text—and not many people, it seems, have read it all the way through—it’s in our cultural genes and has been a lens over time that we see things through.

I am still a religious person—I’m married to a Presbyterian minister—but certainly in a progressive community where nobody goes near Revelation with a 10-foot pole. Most people in my religious circles wonder why this even got into the Bible in the first place.

Given that there’s a popular sense of what Revelation is about, but most people have not actually read the text, how are perceptions about the book mistaken? 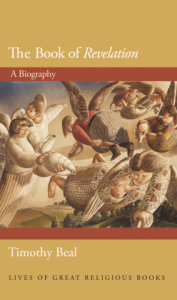 There seems to be a vague sense that Revelation is about some kind of end, some kind of massive final judgment with everyone getting sent either to heaven or to hell. That is kind of incorrect. Sure, the world gets destroyed many times over. There’s tons of destruction and blood and monsters and hyperbolic language.

But in the last chapters, you’ve got this vision—not of the end of the world, but a renewal of the world. People are getting fresh eternal bodies on earth and the whole world is being renewed in the same way. It’s an ending that is also at the same time of beginning. A new Jerusalem is created, a new heaven and earth. People aren’t disappearing to heaven, which is an idea central to the “Rapture.”

The Rapture is not even in Revelation, but it’s now part of the phenomenon we call Revelation. The text has just sort of been broken up and become part of a constellation of ideas that attach to others, like the Rapture.

What do we know about where Revelation came from?

There’s way more uncertainty about its origins than I ever thought before I began my investigation, and some of the evidence out there is relatively weak.

There are different theories, different arguments from different historians. Some think its language may be referencing earlier Jewish wars. Or maybe it was written during a particular time of persecution of Christians by one of the Roman emperors. Or maybe it came out of some other unknown context—there’s no real way to settle this conclusively with what we have right now.

Whoever the author is, no one knows much about. There’s nothing else by the person who is credited, known as John. All you have is his one text.

How did it come to be included in the Bible?

There have been many Christian leaders who believed Revelation didn’t belong as scripture, that it was a fake, or too obscure, or too crazy.

Perhaps Revelation made it into the canon of scripture is because of confusion—thinking Revelation’s author named John was the same person as John, the beloved disciple of Jesus, who tradition credits with authorship of the gospel known by the same name.

During the Reformation in the 1500s, Martin Luther made no secret of disliking it. When he published his German Bible, he separated Revelation from other texts in the New Testament and said in his preface to it that he did not understand why it ever made it into the Bible—and thought people would do well to read other biblical books instead.

But of course, other people embraced it—often as an effective tool for demonizing their theological enemies as devils in disguise.

Part of its appeal can be attributed to how bizarre it is. 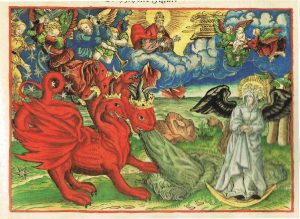 A woodcut from the Luther Bible, depicting a scene from Revelation

Sure. Its incomprehensibility is part of what has made it so successful. The text is so generative—it invites different interpretations in order for us to make any sense of it. And its imagery can be just bizarrely excessive with symbolism and weird images that it almost demands interpretation.

People are drawn to that—even though Luther said not to bother with the book, his Bible also included woodcuts of images from Revelation that were so strange and interesting that they had the effect of making Revelation more popular.

When you look at those old Bibles, you can see that people wore out the pages of Revelation more than others. Probably mostly looking at those pictures.

With some Christian faiths purporting the Bible to be the literal word of God, how does this reasoning reconcile some of the issues around Revelation?

The fact that it’s still in the Bible today lends it validity. Many see the Bible as, essentially, the book that God wrote. Or at least that a divine hand guided its formation closely. So the fact that you can find Revelation in any Bible means it’s there for a reason.

Probably Revelation ended up there because it didn’t fit with the other kinds of literature—gospels and letters—in the New Testament.

So what relevance does Revelation have today?

Revelation is not going away anytime soon. It has many hosts in our world today, to use a parasitic metaphor. It seems to be our apocalyptic go-to, a powerful means of escalating things to the level of a cosmic battle between good and evil, holy “us” against demonic “them.” Which I’d say is just about the last thing we need today.

Maybe the real question is not how is Revelation relevant but how to make it irrelevant, or differently relevant.

The Book of Revelation: A Biography was supported by a Public Scholar Award from the National Endowment for the Humanities.

Beal’s other books include 2011’s The Rise and Fall of the Bible: The Unexpected History of an Accidental Book (Houghton Mifflin Harcourt) and Roadside Religion: In Search of the Sacred, the Strange, and the Substance of Faith (Beacon Press, 2006) among many others; he is also the editor-in-chief of The Oxford Encyclopedia of the Bible and the Arts.