M.C. “Terry” Hokenstad to retire after nearly a half-century of scholarship, service and leadership at Jack, Joseph and Morton Mandel School of Applied Social Sciences

It’s only fitting that trinkets of owls—a universal symbol of wisdom—adorn the office of M.C. “Terry” Hokenstad, a social-work pioneer whose influence on research, education and policy extends far beyond the campus of Case Western Reserve University, where he’s served his students, colleagues and field for 43 years. 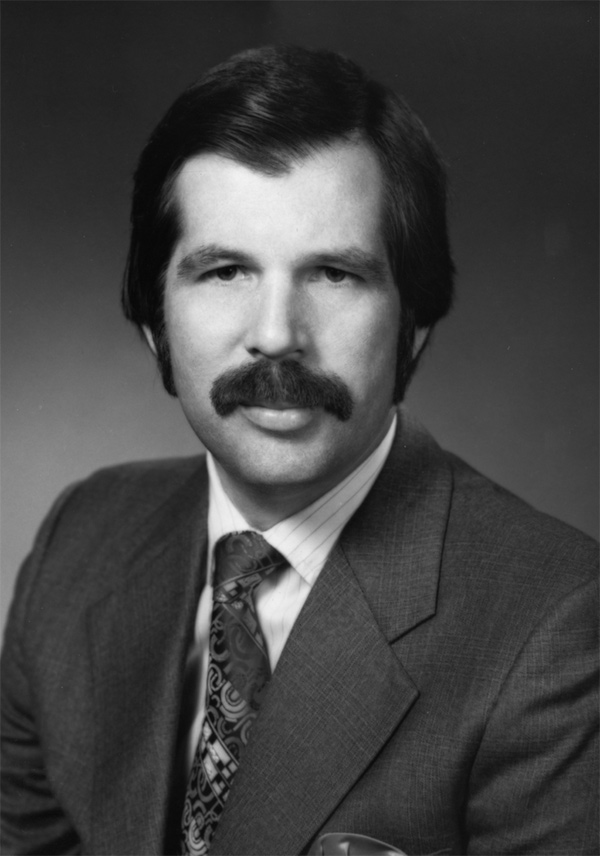 This summer, Hokenstad, a Distinguished University Professor and former dean of the Jack, Joseph and Morton Mandel School of Applied Social Sciences (MSASS), will retire. Reservations are strongly recommended for a celebration of his career on Tuesday, May 9, from 4 to 6 p.m., at the Mandel School.

The owls—many given to Hokenstad during his dozens of trips abroad lecturing and researching—will remain on campus, where he will maintain an office and continue to teach a topic he wove deeply into the Mandel School’s curriculum and mindset: international social work.

In fact, Hokenstad’s work will hardly cease. An array of his projects to pursue better lives for vulnerable people will continue.

Friends and colleagues are as quick to cite his encyclopedic knowledge as they are his contagious laugh, wry sense of humor and a congeniality recognizable no matter the country or culture.

“Terry’s spirit and heart are of someone who believes that we have responsibility to our fellow man and woman,” said David B. Miller, an associate professor at the Mandel School. 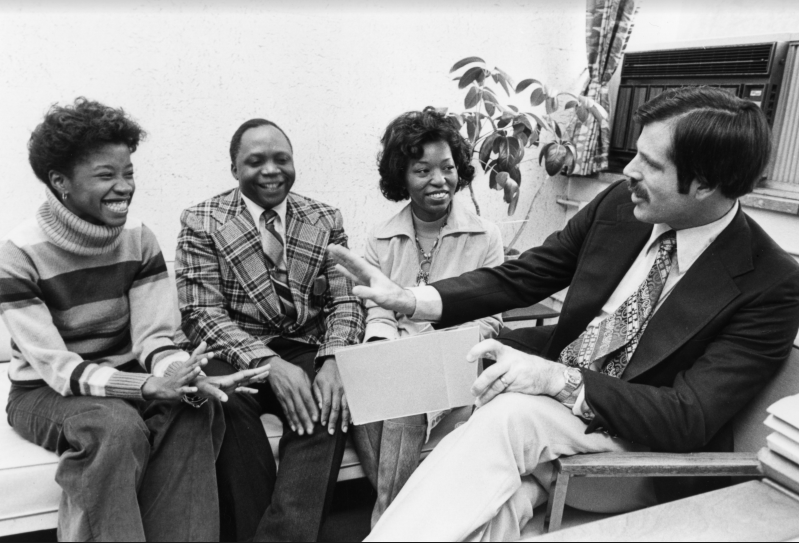 Known internationally for his many efforts to improve the welfare of older adults—a population often overlooked and underserved in many societies—Hokenstad has a drive to help them that is rooted in a profound recognition of their dignity, his friends say. It’s a passion Hokenstad traces to his father’s volunteerism and a close relationship with his grandparents.

“They taught me to see people from perspectives other than my own,” Hokenstad said. “To me, older people were not just frail or sick, but active, involved and deserving of respect.”

The streaks of curiosity and thoughtfulness that sustained his career were present from the start. As a college football player at Augustana College, he was so engaged in an intellectual discussion with a teammate the morning after a game that he missed the bus back home. 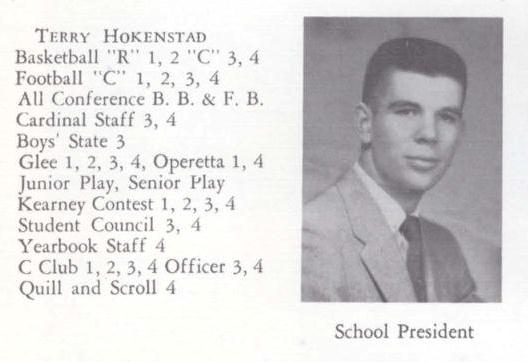 A Nebraska native, Hokenstad opted to attend Augustana, in South Dakota—his father’s alma mater—after high school, instead of the local colleges chosen by many his classmates.

While working summers for the South Dakota Department of Child Welfare, he met Dorothy, his wife of 54 years, who shared his compassion and commitment to act on it in meaningful ways.

After a brief pursuit of the Episcopal ministry in England, Hokenstad chose a life in social work—a path “secular rather than sacred,” he said, but still motivated by service to others.

A move to New York City in the early 1960s proved pivotal to his path: Marching in the streets during the Civil Rights Movement, he and Dorothy—who became a lawyer and social worker—began their ongoing involvement in causes of social justice. 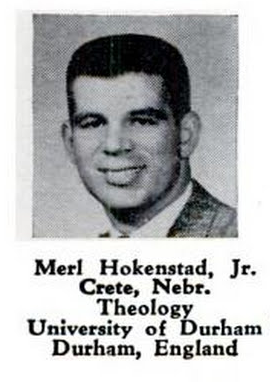 After earning a master’s degree at Columbia University, and helping mobilize support for Medicare, the Older Americans Act, and other progressive legislation of the era, Hokenstad returned to Augustana to teach for the first time—beginning a 50-year career in social work education.

“Being in the classroom has always been my first love, a motivator, a passion,” said Hokenstad, who followed this newfound calling into academia—earning a PhD at Brandeis University and becoming the first director of a then-new social work school at Western Michigan University.

Then, in late 1973, his phone rang, and soon a job offer in Cleveland would soon follow.

A hub for many spokes

Recruited to become dean of the Mandel School in 1974, Hokenstad immediately put his fingerprint on an institution whose reputation as an elite source for social-work research and education has only since grown and solidified. 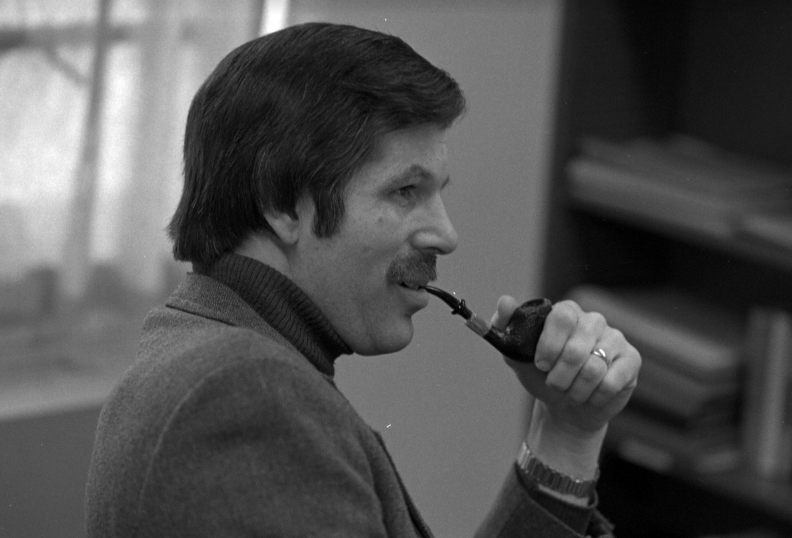 Many of his initiatives are still woven deeply into the school’s fabric—among them, his emphasis on research leading to direct action.

Believing the best teachers are those whose own scholarship was rooted in their service to others, Hokenstad pushed for close town-gown relations, with students and faculty embedded in local non-profits and agencies—still a hallmark of the Mandel School experience.

“Terry had faith in the idea that, to truly excel, a research-based university should be deeply engaged with its community,” said John Yankey, the Leonard W. Mayo Professor Emeritus of Family and Child Welfare.

“He saw no conflict between the two—scholarship and service. In fact, they were supportive of each other,” said Yankey, who joined the Mandel School faculty only months before Hokenstad.

Perhaps the most enduring aspect of his legacy—not only at the Mandel School, but also in his field—is his dedication to the international exchange of social-work knowledge. 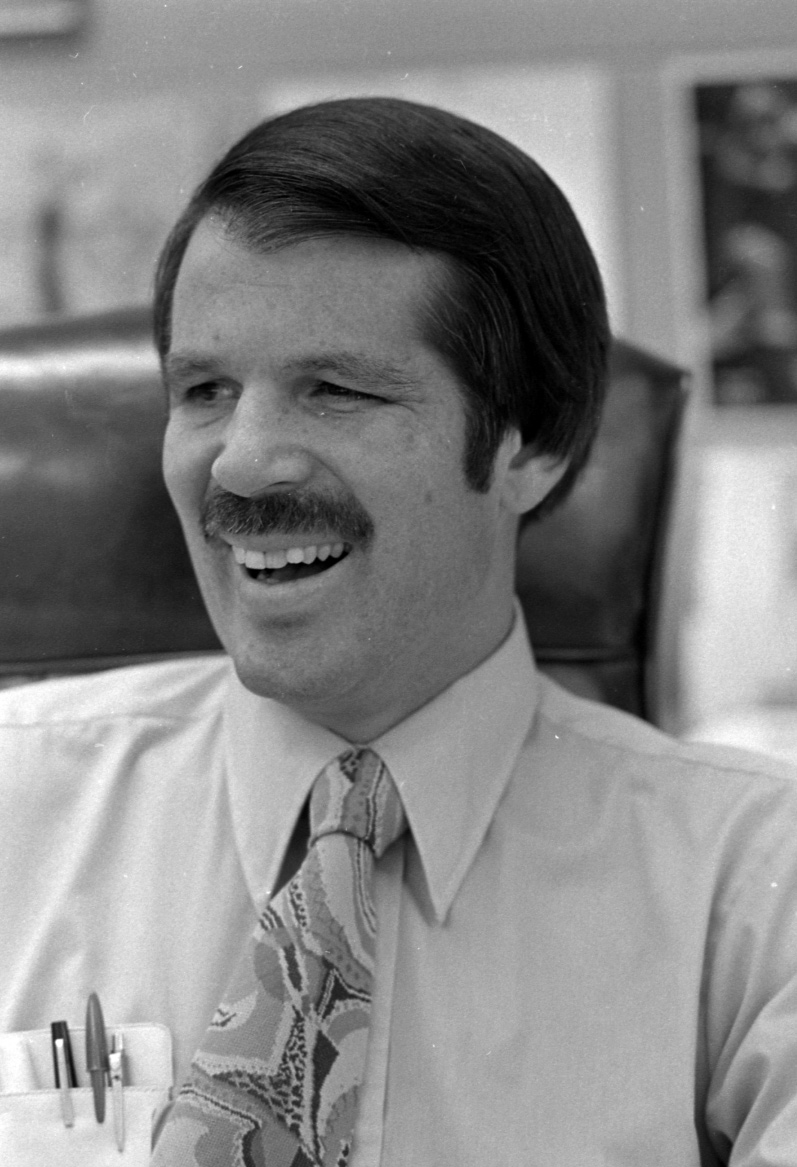 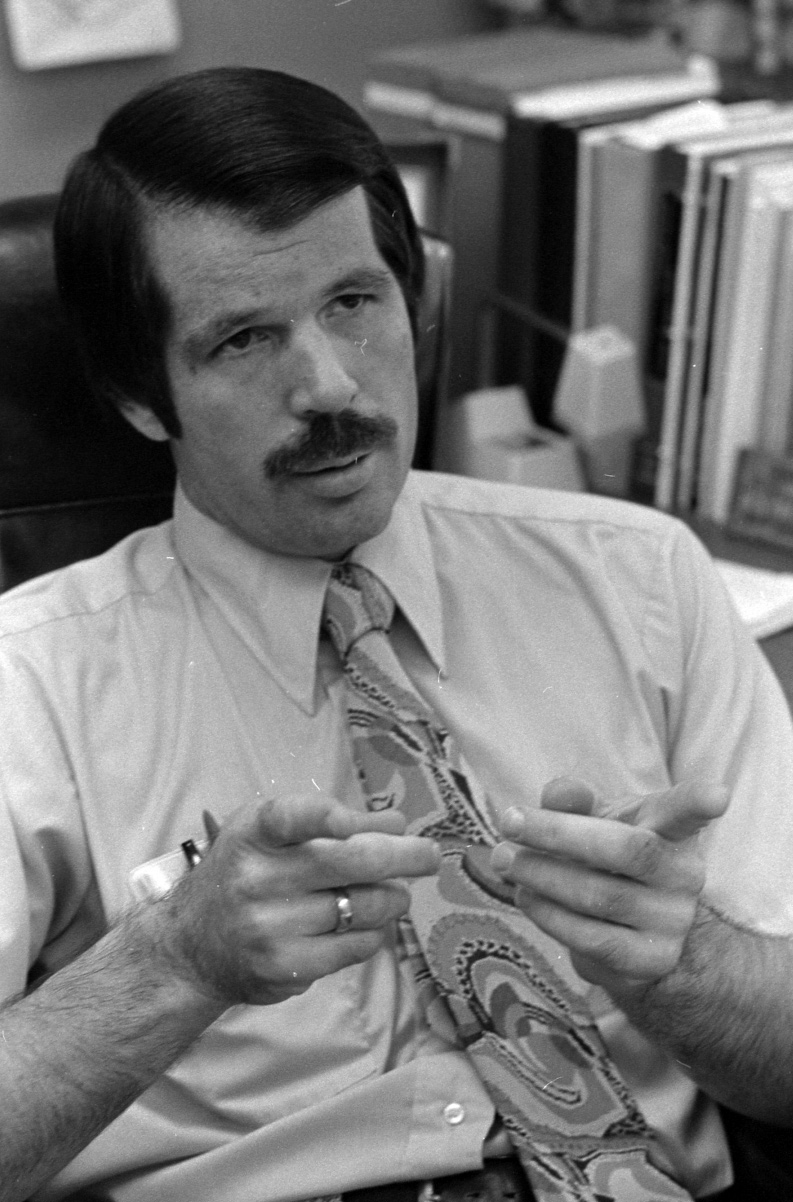 From helping establish social-work education in former countries of the Soviet Union, to training social workers in a rapidly aging China, to divining lessons from European social services for domestic programs in the U.S., Hokenstad imported and exported ideas that sought to find (and spread) a compassionate commonality among diverse cultures and countries.

“Social problems don’t stop at the Atlantic and Pacific Oceans,” Miller said. “Because of Dr. Hokenstad, so many people are thinking bigger and looking outside of their silos for solutions societal issues.”

As dean, Hokenstad was known for trusting in the talents of his faculty and peers and never taking credit for what others accomplished. After stepping down from the position in 1983 for leadership roles in a number of global professional organizations, he redoubled efforts to mentor students.

Among them was Mary McNamara. Overwhelmed at a career fair and desperate to make a decision about her future, McNamara had a chance conversation with Hokenstad that opened her eyes to the needs of older adults and opportunities to help them through social work.

“He changed my life,” said McNamara, now director of the Cleveland Department of Aging. “By helping me focus on the resilience and humanity of older people—who are often in the midst of journeys that often include loss and pain—I found my calling.” 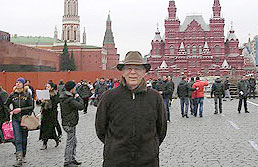 Later this month, Hokenstad will lecture on global aging at a university in Poland. During his many international travels, he relishes the moment airport security asks him to remove his shoes, a requirement for anyone 75 and younger.

“I love telling them I don’t have to,” he said, laughing. “I’ve been lucky and healthy. But you appreciate the challenges and accomplishments of older people when you become one yourself.”

“Never thought I’d see the day that Terry and retirement were in the same sentence,” Yankey said. “And I know better than to believe it.” 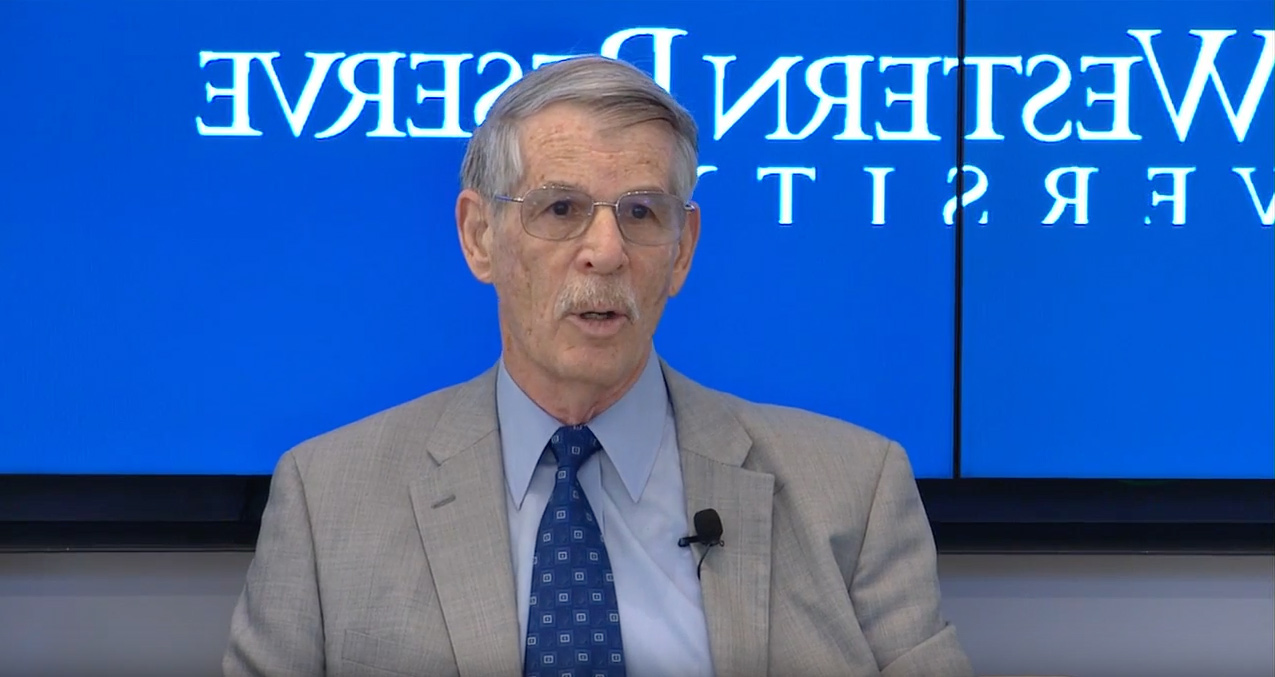 Hokenstad will continue to draft and lobby for a formal human rights convention for the elderly at the United Nations, where, since 1996, he’s been an advocate for curbing elder abuse and ensuring social safety nets as a member of its Non-Governmental Organization Committee on Aging.

Working alongside McNamara, Hokenstad will contribute to the implementation of a plan to make Cleveland an “age-friendly” city—following an adage of accessibility that “what’s good for an 8-year-old is also good for an 80-year-old,” she said.

“Through all his research and global interests,” McNamara said, “he’s thinking of a Cleveland senior.” 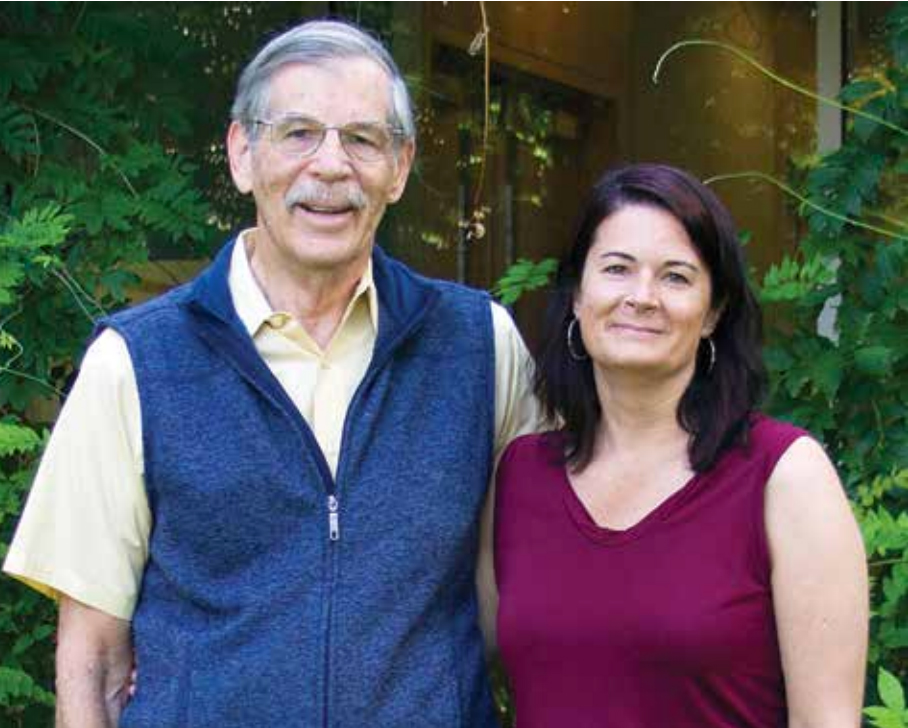 “Having other professors see that makes a difference at our school. Terry has never laid back,” said Grover C. Gilmore, dean of the Mandel School and a professor of psychology and social work. “We all look to Terry as a model of what we should aspire to become.”

A similar feeling drove Hokenstad’s daughter, Laura, to become a humanitarian aide worker who has worked with Save The Children to combat the Ebola crisis in Africa, and is now training social workers to stay safe while serving in the Middle East. 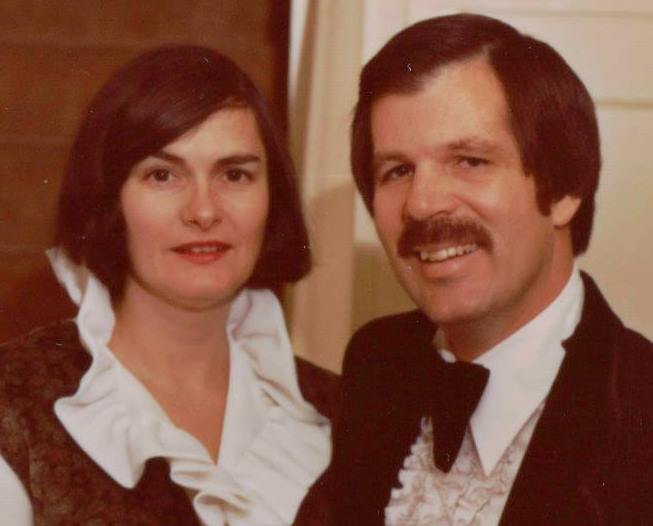 Immersed in her parents’ example of translating belief into deeds, Laura Hokenstad—a 1996 Mandel School graduate and recent recipient of an MSASS 100 Award recognizing accomplished alumni at the school’s centennial—said it was never a question of if she would take on causes of social justice, but how.

“That sounds simplistic, but my parents want to make the world a better place,” she said. “They care about people held back by barriers of circumstance—care enough to help them.”

As retirement nears, Hokenstad insists he will play more tennis. He may write a book (it would be his 10th) about his storied career, which has been recognized with more awards and accolades than can fit onto his office walls.

“Terry is not going anywhere,” Yankey said. “It would take years to clean out his office alone. Especially all those owls.”

Since 1983, The Ralph S. and Dorothy P. Schmitt Professor

1994, Professor of Global Health at the Case Western Reserve School of Medicine

1989 to 1992, president, North American and Caribbean Region of the International Association of Schools of Social Work (IASSW)

1991 to 1993, chair, International Committee for the National Association of Social Workers (NASW)

Since 1996, member, UN NGO Committee on Ageing, representing the IASSW.

2000 to 2002, member, UN Technical Committee for the International Plan of Action on Ageing

Since 2015, chair, advisory council, the AGE-Friendly Cleveland initiative, which is a member of the World Health Organization’s World Age Friendly City Program.