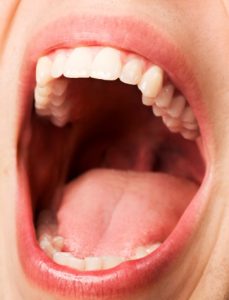 A common oral bacteria, Fusobacterium nucleatum, acts like a key that opens a door in human blood vessels and leads the way for it and other bacteria like Escherichia coli to invade the body through the blood and make people sick, according to dental researchers at Case Western Reserve University.

Yiping Han, professor of periodontics at the Case Western Reserve School of Dental Medicine, made the discovery in her continued work with the Fusobacterium nucleatum bacterium, one of the most prevalent of the more than 700 bacteria in the mouth.

She found the gram-negative anaerobe has a novel adhesin or bonding agent she’s named FadA that triggers a cascade of signals that break the junctures in an interlocking sheath of endothelial cells on blood vessel’s surface just enough to allow F. nucleatum and other bacteria into the blood.

Han has studied the oral bacteria over the past decade and was the first to find direct evidence that linked it to preterm labor and fetal death. But its presence is found in other infections and abscesses in the brain, lungs, liver, spleen and joints.

After finding and genetically matching the oral bacteria in fetal death, she began to unravel the mystery of how an oral bacterium can be found throughout the body and jumps the blood-brain and placental barriers that usually block disease-causing agents.

Through years of lab work, her research led to the vascular endothelial (VE)-cadherin, cell-cell junctures that link the endothelial vascular cells together on the blood vessels.

These junctures are like a hook and loop connection, but for some unknown reason when F. nucleatum invades the body through breaks in the mucous membranes of the mouth, due to injuries or periodontal disease, this particular bacterium triggers a cascade of signals that causes the hook to recede back into the endothelial cell. The oral bacterium leads the way with any other harmful invaders following along.

This “deceding” was observed by confocal microscopy when Han used cells from the human umbilical cord. The researchers introduced F. nucleatum and demonstrated the VE-cadherins break on bonds on the endothelial cells and create enough space in the endothelium for the invaders to move in.

“This cascade knocks out the guard on duty and allows the bacteria to enter the blood and travel like a bus loaded with riders throughout the system. Whenever the F. nucleatum wants to get off the bus at the liver, brain, spleen, or another place, it does,” Han said.

When it disembarks from its ride through the blood, it begins to colonize. The colony of bacteria induces an inflammatory reaction that has a range of consequences from necrosis of tissue to fetal death.