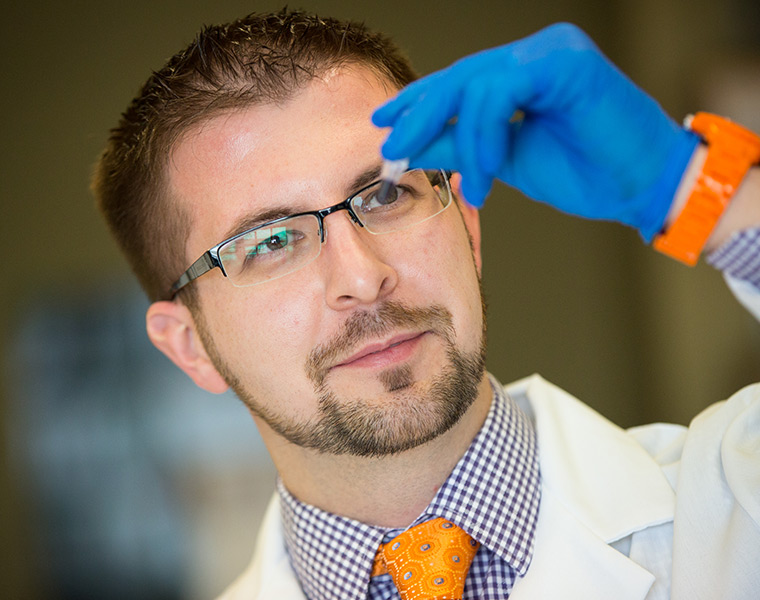 While earning an undergraduate degree in biology at Case Western Reserve, Paul Tesar had three outstanding scientific mentors whose influence he feels to this day.

Now, 15 years later, it’s Tesar who’s being recognized for inspiring and guiding students: He will be honored during commencement May 20 as one of two recipients of the 2018 John S. Diekhoff Award for Mentoring.

“Chuck, my advisor for my biology major, provided superb guidance, and when I joined the Haynesworth and Caplan labs in my freshman year, I immediately knew I wanted to do science as a career,” said Tesar, an associate professor of genetics and genome sciences and the Dr. Donald and Ruth Weber Goodman Professor of Innovative Therapeutics.

When applying to graduate school, Tesar was enthusiastic to stay at Case Western Reserve, but was initially confused and upset when all three mentors told him not to—that he should leave Cleveland, his beloved hometown.

“Later, I realized they were being amazingly unselfish and looking out for my best interests,” he said. “I know now that scientific training is about new environments, techniques and topics that one can only get from changing locations during each phase of training. This experience taught me that true mentors always put the best interest of their students first—no exceptions.”

Tesar went on to earn his PhD from the University of Oxford as a recipient of the prestigious NIH-Oxford Biomedical Research Scholarship and earned several international awards along the way.

He continued his training as a postdoctoral fellow at the National Institute of Neurological Disorders and Stroke at the National Institutes of Health. During his graduate and postdoctoral studies, Tesar investigated harnessing stem cells as a way to better understand the development of the central nervous system and related diseases. This early work resulted in a landmark and frequently cited paper in Nature, which described the isolation of epiblasts, a new type of stem cell.

Tesar’s students are given full access to all aspects of his role as a principal investigator. This includes hiring, grant writing, reviewing, marketing and budgeting.

One student award nominator described him as “one of the best visionary leaders I have come across … (someone who) challenges each member of the lab to dream and ask big questions that could have widespread impact in the scientific community.”

Tesar also emphasizes a proper work-life balance—a lesson he learned from one of his Oxford PhD advisers, Sir Richard Gardner. For instance, there are no required long hours. He sets the example by leaving the lab by 5:30 p.m. every day so he can eat dinner with his family—and encourages everyone else to do the same.

“I want to be Paul when I become a faculty member myself, and it just isn’t his science … but his personal life and ability to balance the two,” wrote a student award nominator. “He is as good a mentor as he is a scientist.”

These awards are presented during the Graduate Studies diploma ceremony.