Writers Writing Words allows students to write for fun, charity and themselves

The Charity Write-In, as it’s called, is a project of Writers Writing Words, the primary creative writing group on campus. At the end of the week-long collection drive, held Monday, April 23, through Friday, April 27, the students will break into groups based on the genre in which they’re interested and begin to write—one word for every cent they receive. All proceeds will go to the Cleveland Kids’ Book Bank.

Their efforts will culminate in an e-book, made available to all donors and those who sign up for their mailing list. Last year’s e-book featured a number of interesting stories, including a “political fantasy” set in a desert, shared Won Hee Kim, the group’s event coordinator. 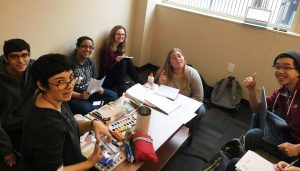 Students meet weekly to write and have workshops to discuss tips and practice techniques.

But the group isn’t limited to humanities students; others study subjects like biology, computer science, chemistry and physics. For example, the group’s vice president, Darius Williams, is an astronomy major who joined the club because it fulfilled his interest in writing outside of academics.

The group, Williams said, provides “a place where you can be free to share things that you’ve written and have fun with other like-minded writers.”

Writers Writing Words hosts workshops each Saturday for writers in all genres. Some of these workshops are led by club members and focus on improving specific writing skills; others are simply a chance to play fun writing games. All of them encourage sharing stories and giving feedback, which is “an important part of improving yourself as a writer,” said Kim.

As a part of this mission, the group decided to host its first Charity Write-in last year. At the end of the week, the organization was able to donate about $350 to Cleveland Kids’ Book Bank, meaning the students wrote around 35,000 words for their e-book.

For those interested in funding students’ creative endeavors and the book bank, Writers Writing Words will be at tables in Nord Hall’s atrium Monday, April 23, and Tuesday, April 24, and in Thwing Center’s atrium Wednesday, April 25, and Thursday, April 26. The group also plans to take the arts outdoors, writing in front of Merging (also known as the wet/dry fountain) on Mather Quad Friday, April 27.