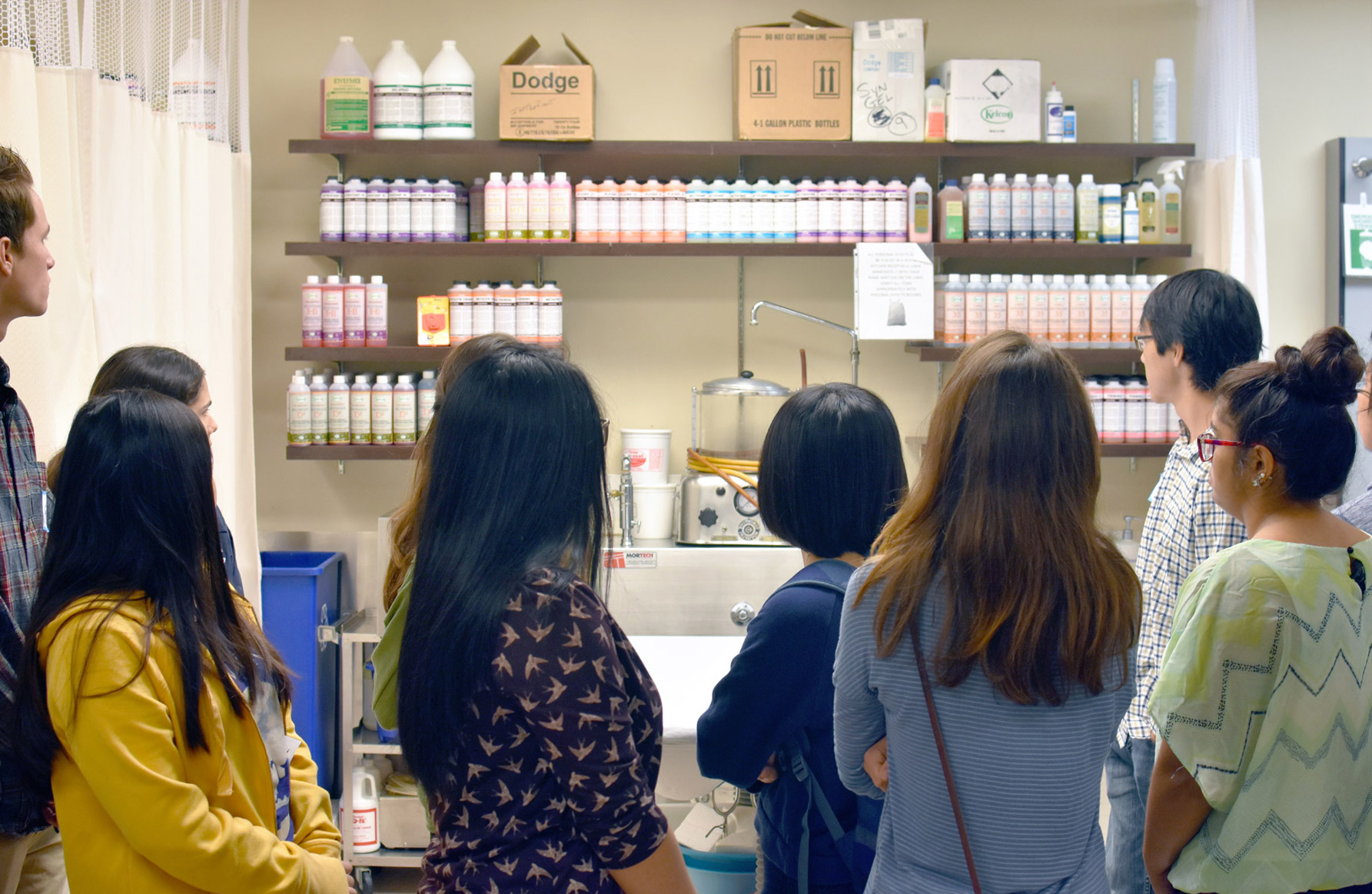 Class searches for the meaning of a “good death”

An elderly woman is laid on a stainless-steel table, her hands folded, with a white sheet covering her face. For many of the Case Western Reserve University students in this class—Perspectives on Dying and Death: Normalizing the Inevitable—it’s their first time seeing death up close.

Maryjo Prince-Paul, associate professor of nursing, leading a class discussion in a mortuary.

In the weeks leading up to this field trip to the Busch Funeral and Crematory in Parma, these SAGES students prepared for the experience by writing their own obituaries and contemplating what a “good death” means to them, assuming there is such a thing.

“We are all born with the disease of mortality,” said Maryjo Prince-Paul, an associate professor at Case Western Reserve’s Frances Payne Bolton School of Nursing, who teaches the course. “In the class, we try to confront death as something more than an abstract possibility—it’s going to happen to all of us and our families and friends.” 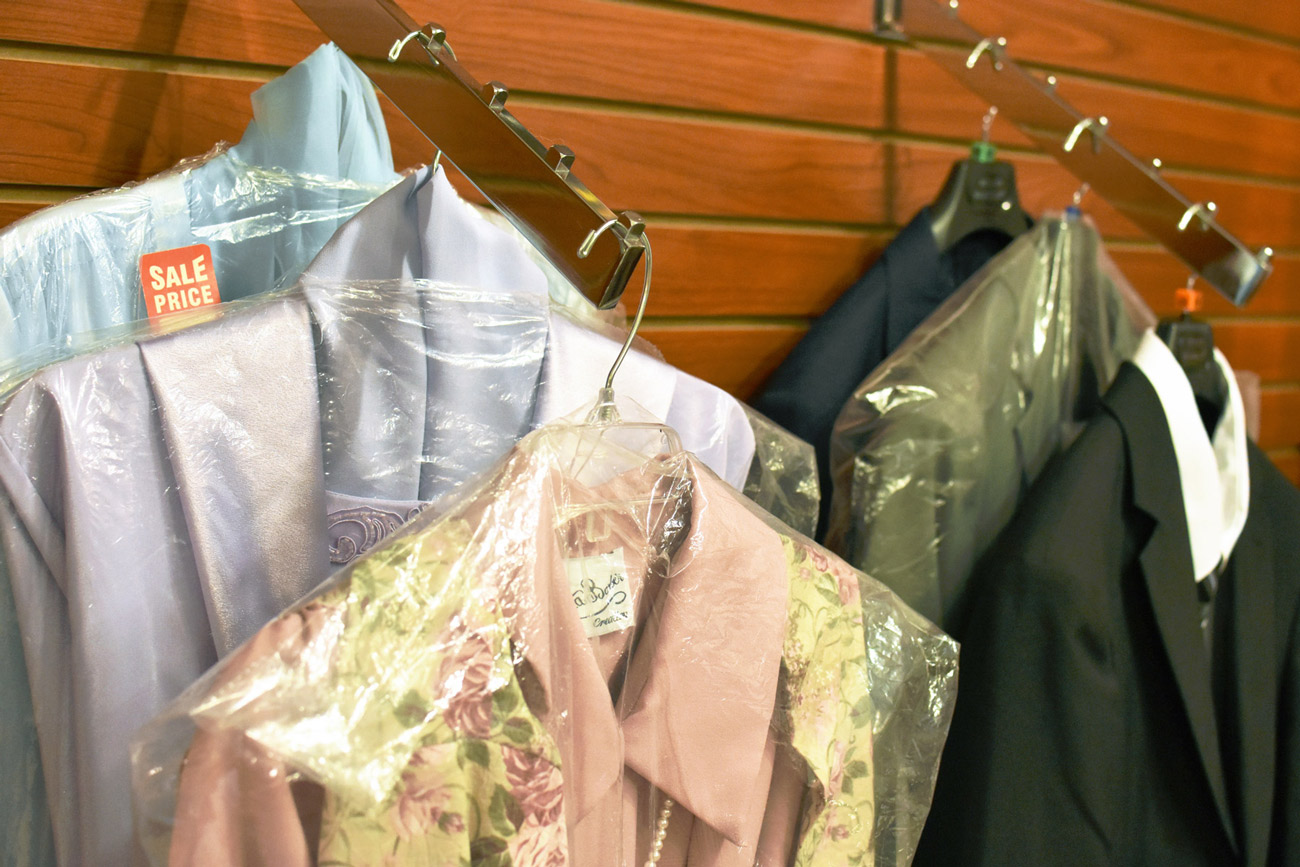 The sale rack of clothes for the deceased at Busch Funeral and Crematory Services in Parma, OH.

The course—in its second year and offered in the fall semester—had 18 students who major in disciplines from across the university. Together, they studied and discussed what it means to die in America, in terms physical, psychological, spiritual, cultural, ethical and economic. They hailed from China, Italy, both American coasts and many places in between—and approached the topic from an array of cultural and religious backgrounds.

They considered, among other questions: How do you make treatment decisions that involve quality of life for someone else? What happens when families conflict about this? How does someone—or a group of people—even come to these decisions?

Over Thanksgiving, students initiated a conversation with a family member about advance care planning; essentially—to find out what their mothers, grandparents or other relatives want and don’t want in serious illness and at the end of life. They came prepared with icebreakers, including blaming Prince-Paul for any ensuing awkwardness. Many students completed “advance directives” for themselves. 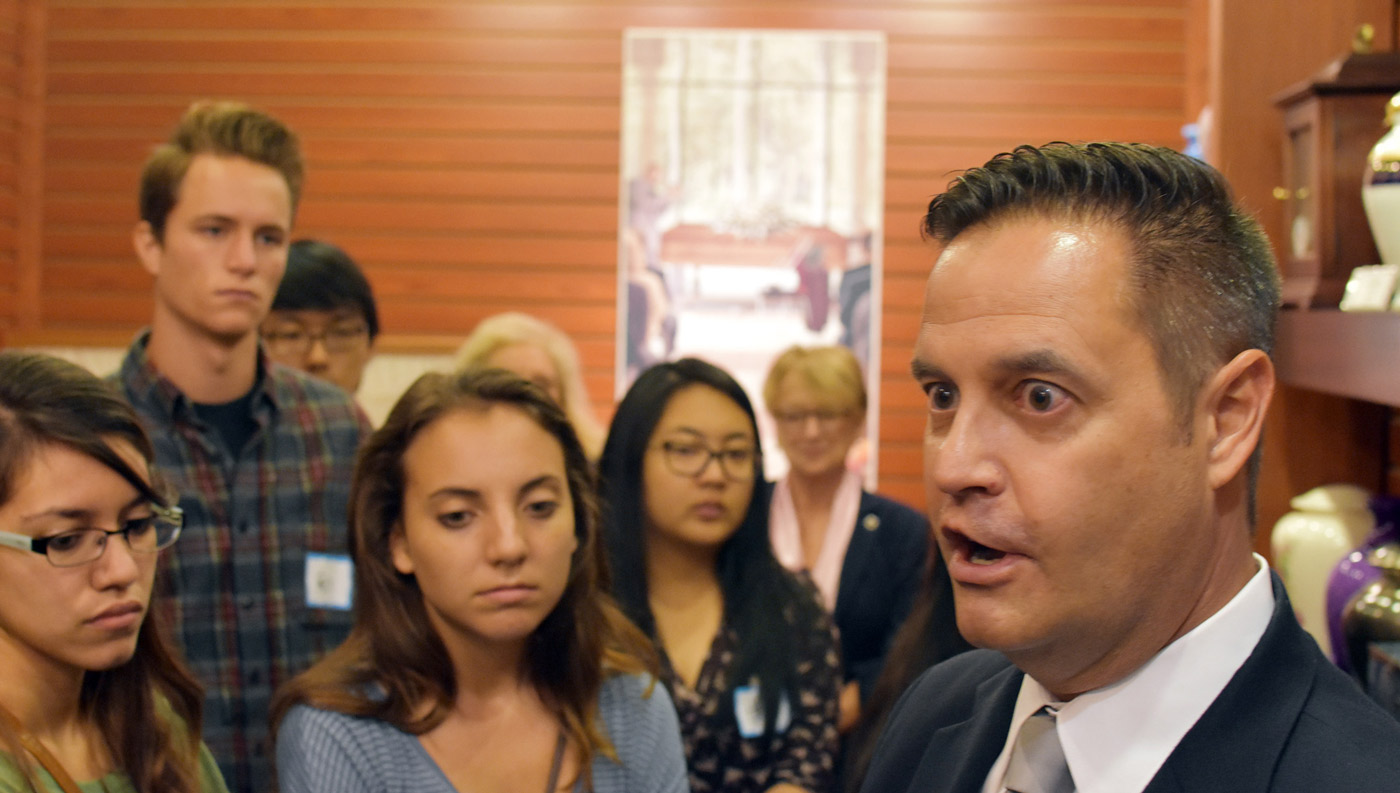 “This is about fulfilling how people want to live until they die, including funeral planning. It’s an ongoing process—not an event,” said Prince-Paul. “Now students have this tool and experience to discuss these issues with loved ones.”

Conversations like these will be needed as the baby-boom generation ages: By mid-century, the number of Americans age 65 and older is projected to more than double—to 88.5 million—according to the U.S. Census Bureau.

Only about a third of U.S. adults have an advance directive expressing their wishes for end-of-life care, according to the Pew Research Center and the AARP.

“As a society, we simply don’t talk about this universal experience, not until we have to face it,” said Prince-Paul. “And then, it’s often under a crisis experience when we have to make decisions while laden with intense emotions.” 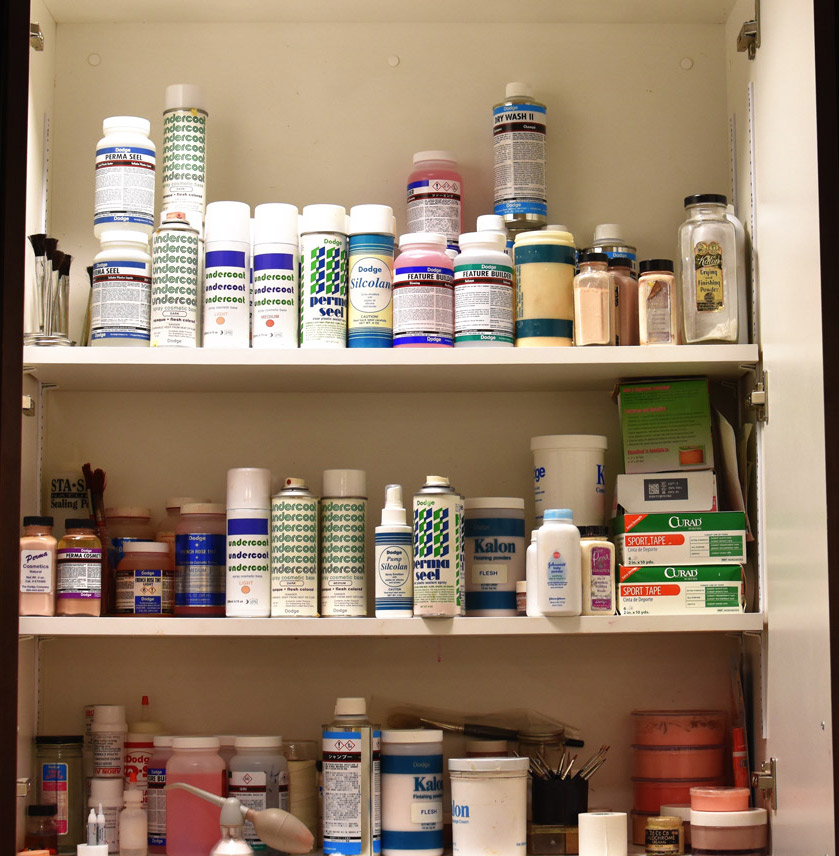 Embalmers draw from cabinets packed with cosmetic products to prepare a body for showing.

The topics especially hit home for Nishi Bhagat, a sophomore biology major from Philadelphia, whose mother is in hospice care.

“I took this class to understand what’s going on, what my mom is going through,” Bhagat said. “The class has helped me talk openly; it’s been good to share with my classmates.”

At the funeral home, Busch funeral directors fielded questions from students—How did you learn to be around death all the time?—and led the group to the crematory.

They looked inside the brick retort, where 60 percent of the deceased handled by Busch are cremated each year. Here, families watch their loved ones enter the van-sized machine.

Students took turns peering inside the funeral home freezer, where five bodies lay under sheets amid scattered red rose petals—a Hindu custom—which provide the only color in the room. 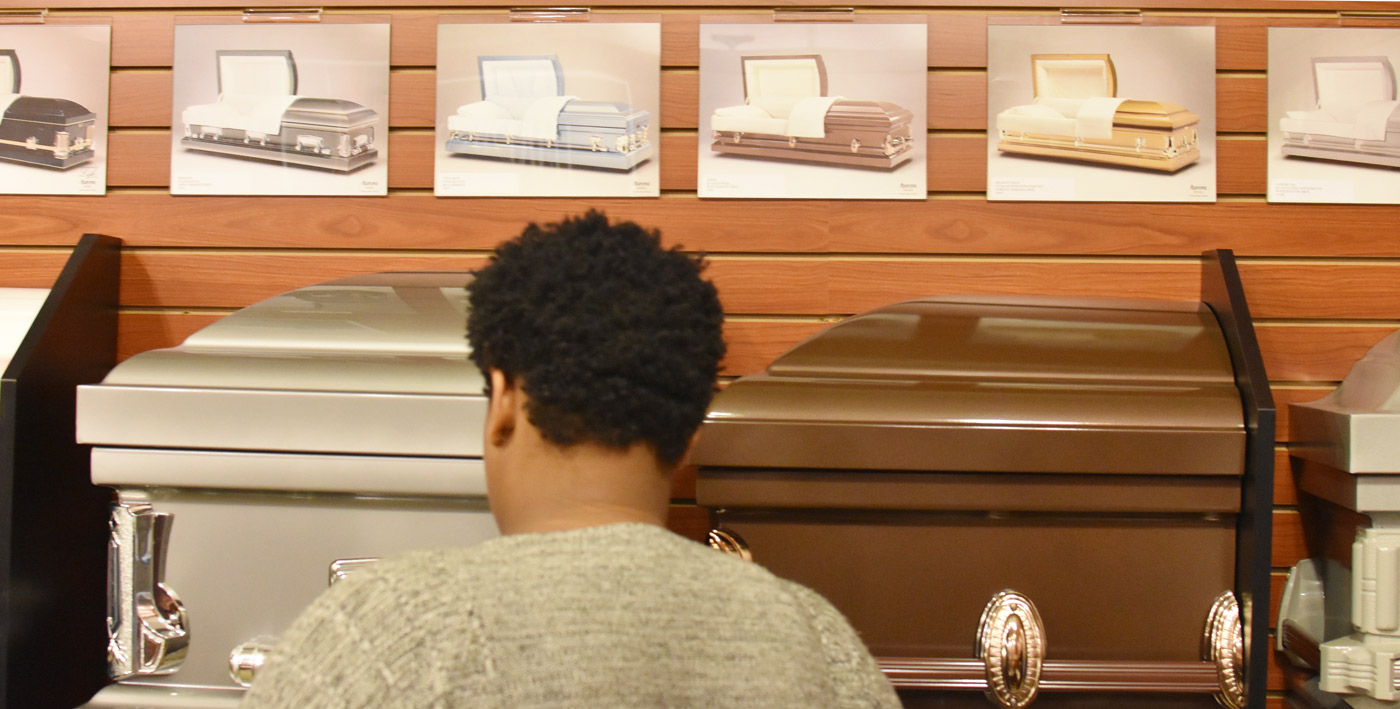 Standing next to the deceased woman, students heard how embalmers draw from cabinets of wigs, hair extensions and skin-tone spray paints to make bodies presentable for viewing. They also learned how the necessary work can be extensive and strikingly practical, especially after a long illness or an accident: topical packs dry out tumors, Plaster of Paris fills in divots, superglue permanently closes eyes, sutures keep mouths shut and Styrofoam blocks wedge bodies into stable positions.

“To see a loved one in restored state is invaluable,” said Robert Solich, funeral director at Busch.

Along the way, Prince-Paul mentioned that each funeral costs between $4,000 and $10,000, which does not include the casket, burial plot or flowers. 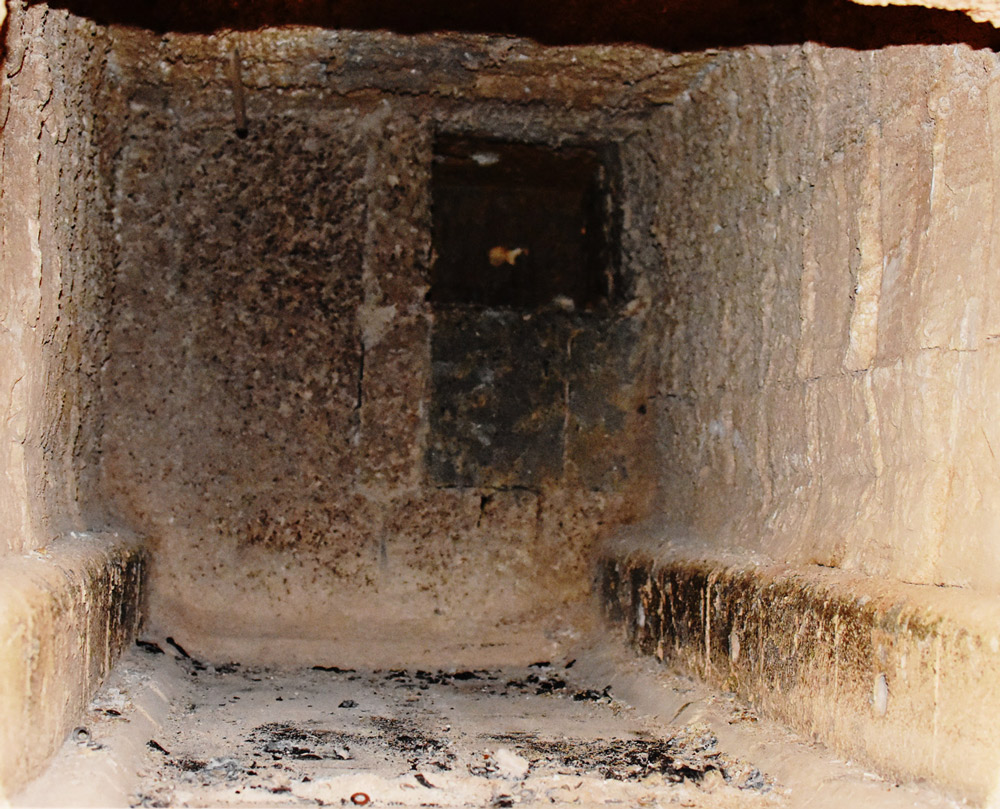 Inside the “retort”, where 600 bodies a year are cremated at Busch.

Touring the gallery of headstones, urns and attire for the deceased, students heard how some families have parked Harley-Davidsons next to a casket or blast rock music during showings and funerals—all with the help of celebrants, who try to reflect the life of the deceased and infuse the process with meaning for families.

“We’ll do whatever is requested,” Solich said, “within legal boundaries.”

During the semester, the class visited a hospice facility and Lake View Cemetery; they read Atul Gawande’s Being Mortal and discussed how race, income and education affect end-of-life care and decisions.

“It’s important to talk about what each individual person wants,” said Liz Madden, a junior nursing major from Columbus, Ohio. 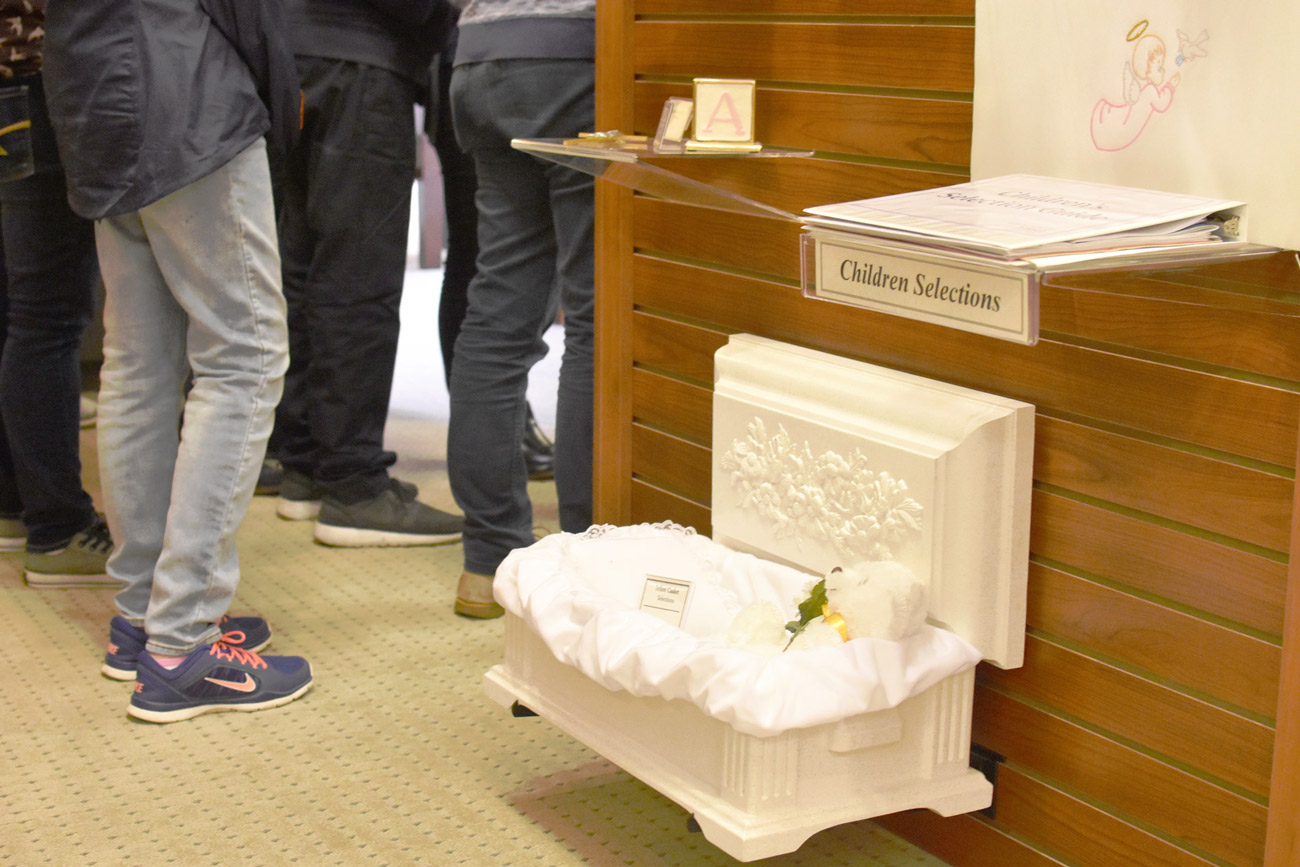 Standing next to an infant’s casket for sale, students learn about headstone pricing.

“I think it’s a privilege to be around people at the worst times of lives and to offer them comfort,” she said. “As a nurse, I will work around death a lot.”

In early 2016, Madden’s grandfather passed away under hospice care at her aunt’s house surrounded by family. The experience showed her what a “good death” can be—inevitable, but with careful consideration and respect for all involved. 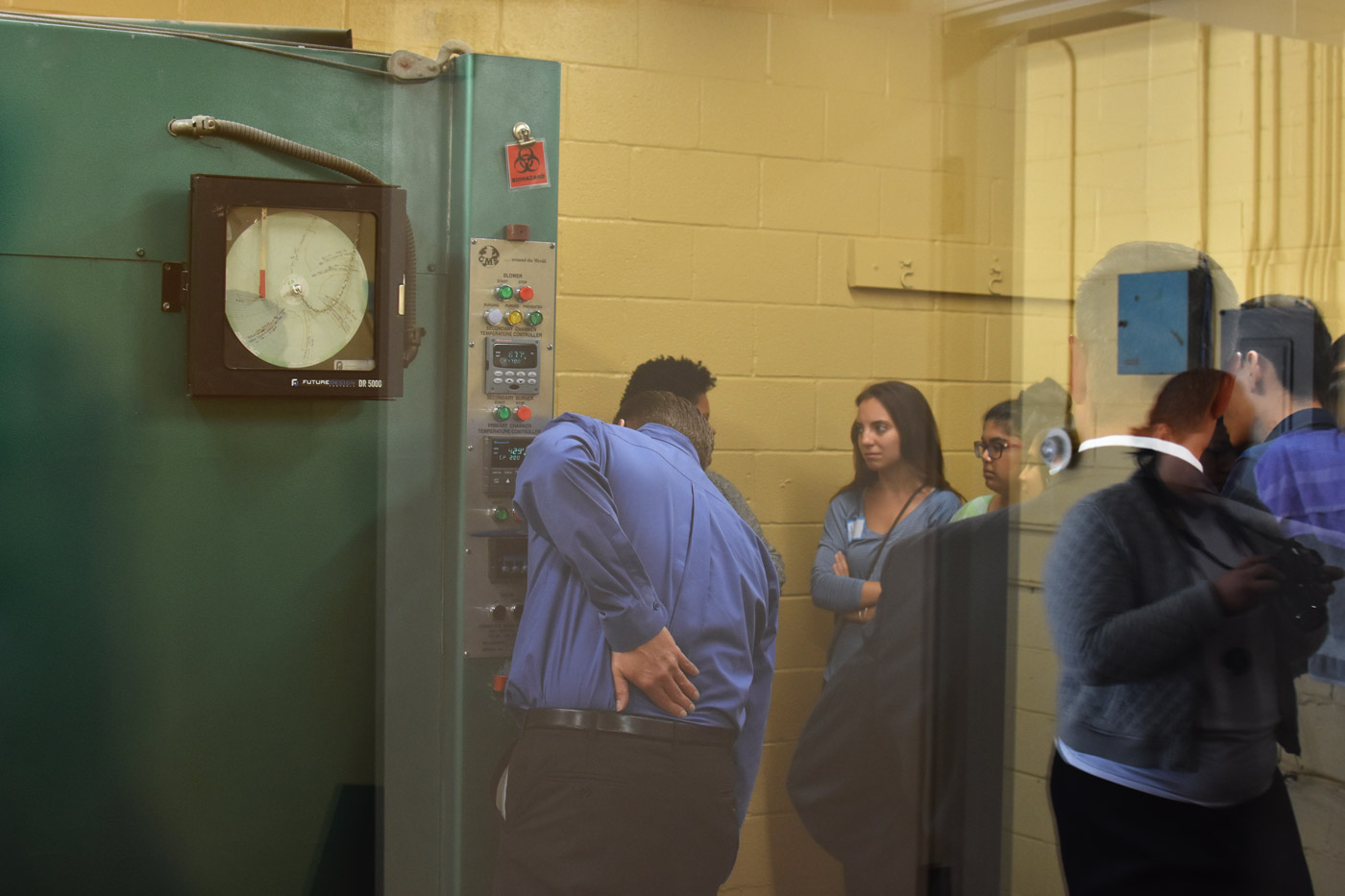 Through glass, friends and family can watch loved ones enter the retort to be cremated.

“I’ve seen patients in my rotations who are slowly wasting away in pain and families are not ready to accept they’re dying and not going by what the patient wants,” she said. “Sometimes it’s hard to face the reality of the situation.”

In class, Prince-Paul had her students make a list of people or things important to them, and then cross them off, one by one, to get a sense of what they will lose in their lives.

In another activity, students wrote about something or someone they’ve lost, such as their parents’ marriage or a friend.

“The class changed me a lot,” said Hannah Kent, a junior who was born in China and raised in Ashtabula.

In fact, after taking the class in the fall of 2015, Kent switched her major to bioethics and will pursue a doctorate in the field. Eventually, she hopes to work with ethics committees in hospitals that make end-of-life care decisions when no one can speak on a patient’s behalf. 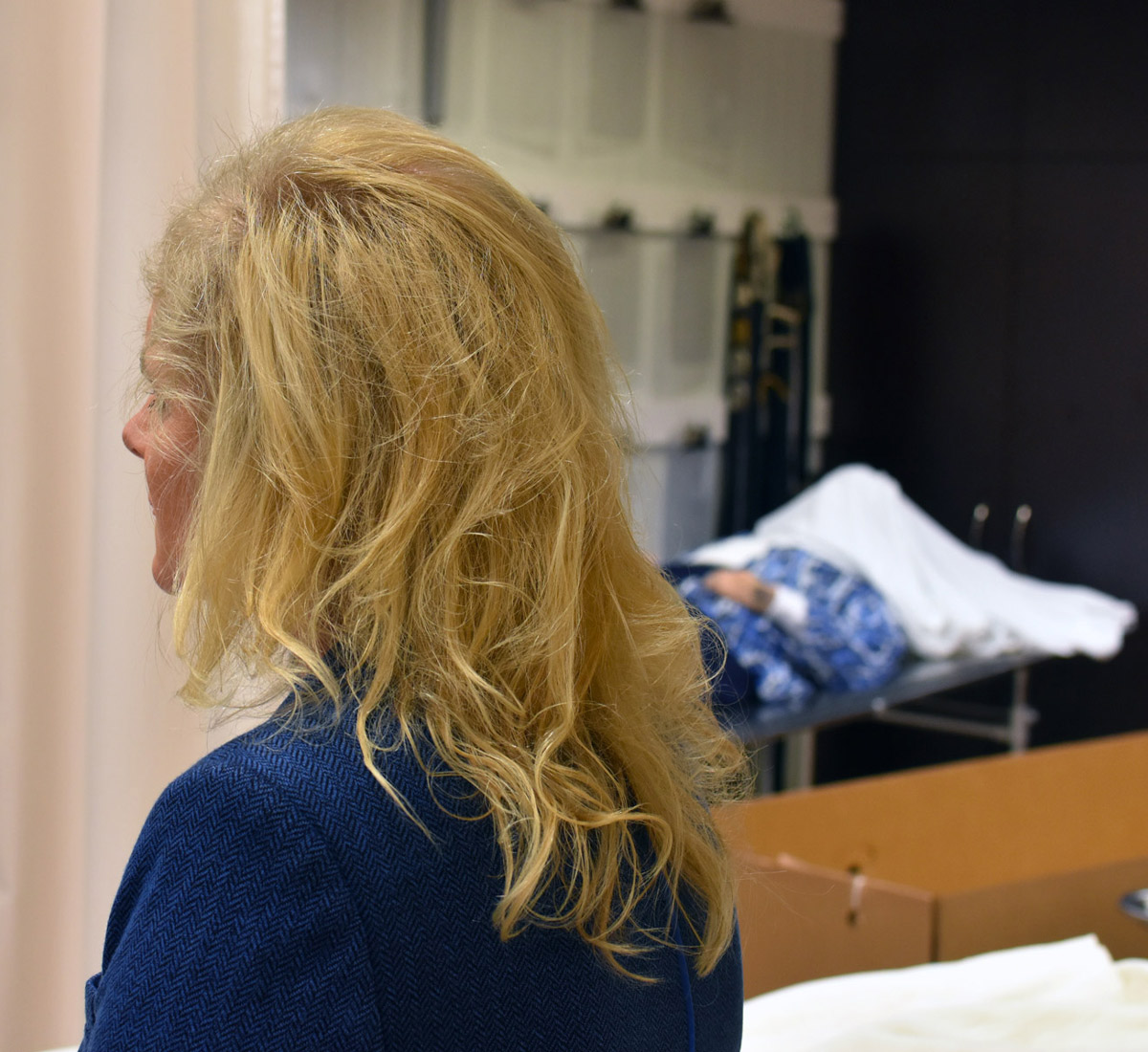 “It helped me identify what’s most important in life,” Kent said. “To me, that will be helping people navigate these tough situations.”

The class has also been a singular experience for Prince-Paul, who has had a long career conducting research in end-of-life care and serving as an advanced practice nurse in palliative care at the Hospice of the Western Reserve in Cleveland.

“The patients’ lives I’ve touched and had the privilege of witnessing their deaths, all the research studies and courses I’ve taught—this class has affected me more than anything,” said Prince-Paul. “When students ‘get it’—that this is not a dying class, but one about making decisions about how you want to live.”