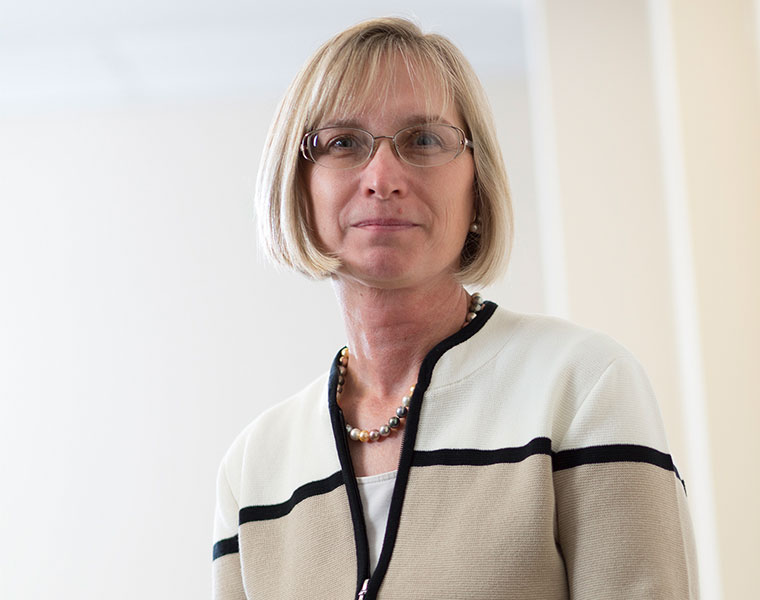 It may fall to medical historians to recall when even successful total joint replacements would sometimes result in patients suffering needlessly as the plastic inside their knee or hip began to degrade.

Among the scientists credited with solving that post-surgical complication is Clare Rimnac, the Wilbert J. Austin Professor of Engineering in the Department of Mechanical and Aerospace Engineering.

Rimnac’s research—funded nearly continuously for more than 30 years by the National Institutes of Health, along with orthopedic industries and private foundations—has focused in part on “degradation science,” uncovering how ultra-high molecular weight polyethylene ages both before and after implantation in the body.

Distinguished University Professor is a permanent title to honor exceptional faculty members for their contributions to research, scholarship, teaching and service.

For that achievement and more—mentoring students, collaborating with colleagues and leadership in diversity and inclusion—Rimnac will be honored as one of three new Distinguished University Professors during fall convocation today (Aug. 29) at Severance Hall.

“Her discoveries have directly affected the lives of hundreds of thousands of patients,” James McGuffin-Cawley, interim dean at the engineering school, wrote in his nomination letter for Rimnac. “She also embodies excellence and achievement in academics and scholarship.”

A career of ‘firsts’

Rimnac’s career has been marked by firsts. She was:

She was drawn away from a career in hospital-based research to Case Western Reserve 22 years ago by the prospect of more dynamic engagement with students.

“At a university, you have a wonderful opportunity to train and educate the next generation of researchers and engineers,” she said.

Rimnac said her motivation as a researcher, professor and mentor is to push for what she calls “inclusive excellence” on campus—and making a difference in the lives of those around her.

Ozan Akkus, once Rimnac’s student and now the Leonard Case Jr. Professor of Engineering in the Department of Mechanical and Aerospace Engineering, is one of those she has helped.

“What I admire the most in Clare is her scientific and personal integrity,” Akkus said. “She has been the best possible role model I could have had.”

Rimnac said it’s an “enormous honor” to be named Distinguished University Professor, but that she finds joy mostly in those student relationships.

“If you’re in an academic environment and you don’t love working with students, you should be elsewhere,” she said. “I try to impress on my students that engineering is a great pathway for making a difference in people’s lives.”