Chuck and Char Fowler give $6 million for Fowler Family Fellows 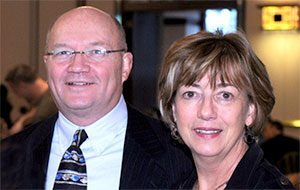 Chuck Fowler’s leadership of Fairmount Minerals proves conclusively that companies really can do good and do well. But persuading others to embrace sustainable value involves more than setting an impressive standard—research, education and outreach all are essential to extending the company’s principles of People, Planet and Prosperity to the rest of the world.

To that end, Fowler (MGT ’90) and his wife, Char, have made another extraordinary investment in the Weatherhead School of Management: a $6 million commitment for the Fowler Family Fellowships. The awards will provide financial support for highly qualified MBA students with a passion for sustainable value. With this gift, the Fowlers and Fairmount Minerals have dedicated a total of $16 million to Case Western Reserve University.

“Chuck Fowler lives his principles in business, civic engagement and philanthropy,” Case Western Reserve President Barbara R. Snyder said. “We are honored by the investments that he, Char and Fairmount have made in our efforts, and confident his latest commitment will engage new generations of outstanding students in the work of sustainable value.”

In 2006, a $2 million commitment from Fairmount Minerals created an endowed professorship in social entrepreneurship, held since 2007 by David Cooperrider. Three years later, the Fowlers gave $7.5 million to create an academic center dedicated to research and education on social entrepreneurship and sustainable value. The Weatherhead School and the center since have launched an academic track in sustainable value for MBA students, and the center also offers consulting and other assistance to firms and organizations that wish to pursue sustainability action plans.

The new Fowler Fellows program will engage MBA students in researching and writing about successful efforts to apply sustainable value. The process will provide invaluable learning for students, and also add to the center’s store of meaningful teaching cases for students at universities around the globe.

The Weatherhead School forecasts enrolling five to eight exceptional Fowler Family Fellows per year, and will provide them financial support equal to about half of tuition costs. The prestige of the designation, coupled with the opportunity to reduce education expenses, provides an opportunity to make the school increasingly competitive overall in the MBA marketplace, while at the same time expanding the impact of the Fowler Center’s work.

“Business definitely is the agent of world benefit,” Chuck Fowler said. “We need to be able to get that word out to the world.”

Fowler studied with Cooperrider during his executive master of business administration program, and found the concepts presented so compelling that he began applying them within his own company. Over the years, Fairmount has held both modest and massive gatherings of employees dedicated to collective imagining of best futures. Cooperrider developed the model for such positive, strengths-based conversations, known as appreciative inquiry.

During one such summit that Cooperrider led in 2005, more than 200 Fairmount employees embraced the ideal of sustainable value. One of the aspirations they identified then was achieving “zero waste.” This summer, Fairmount announced that six of its facilities had achieved that goal for 2012. The company also cut $6.2 million in fuel costs by adjusting transportation methods and saved more than $500,000 through recycling. Fairmount is one of the largest producers of industrial sand in North America.

This spring Chuck, Fowler retired as president and chief executive officer of Fairmount Minerals, positions he had held for 17 years. He continues to serve as co-founder of the company, and last year also became chair of the university’s Board of Trustees.