Center for the Study of Writing announces faculty award winners 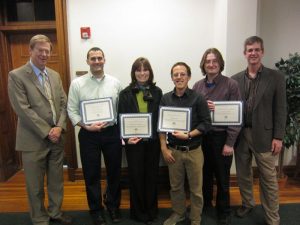 The Center for the Study of Writing recently honored four faculty members with teaching awards.

Jeffrey R. Capadona, assistant professor of biomedical engineering, received the Jessica Melton Perry Award for Distinguished Teaching in Disciplinary & Professional Writing. This award recognizes teaching that has contributed to the development of student writing within academic and professional fields across the university (other than English). It is named for Jessica Melton Perry, who worked in the Center for Documentation and Communication Research at Western Reserve University from the late 1950s into the late 1960s.  The award was established by Edward S. Sadar, M.D. (ADL ’64, SOM ’68) and Melinda Melton Sadar (FSM ’66).

Capadona’s research laboratory is investigating new materials for neural interfacing. These technologies will benefit people paralyzed by head or spinal-cord trauma or those with deficits caused by stroke, or degenerative neurological diseases. His students praise his willingness not only to provide feedback on their writing but also to guide them in their writing processes. Capadona said he works collaboratively with his students, sitting “down together with all of the figures that will become the ‘meat’ of the paper, and organiz[ing] them into the best story.”

For his students, this process models good science, not simply good writing. His students said he “instills a sense of empowerment” and that he is responsible for restoring and bolstering their self-confidence as writers and as presenters of scientific information.

Burgess-Van Aken is a SAGES Fellow who teaches a range of seminars on topics such as “Philanthropy in America,” “The Art of Madness” and “Shakesploitation.” One faculty collaborator says of her: “Barbara’s teaching presence says that good writing is important, possible and rewarding.” A student’s comment sums up many of her student evaluations: “This course was an exciting opportunity to allow me to think critically. … I enjoyed writing the papers, which is something I have never said previously.”

Jaussen is an English lecturer who has spent just two semesters at CWRU but has already made a big impression on students and faculty. One of his fall semester collaborators wrote that Jaussen is the best of a long list of very strong SAGES writing instructors, commenting, “Paul reinvigorated the class and made it fun.” One student wrote: “Paul is an excellent resource in writing. He gives great feedback. … He has helped me keep track of the focus in my writing and strengthen other aspects as well.”

One of his students wrote: “Dr. Hoeynck has provided me with writing assistance since first semester of my freshman year. I am confident in saying that I would not nearly be the writer I am today if it were not for his guidance over the past two years. The knowledge I have learned from Dr. Hoeynck about writing and, more importantly, formation and defense of an argument is truly invaluable. I cannot think of a more worthy recipient for this honor than Dr. Hoeynck.”