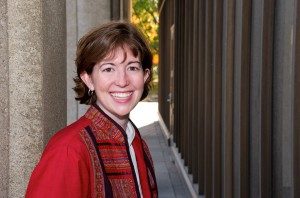 Case Western Reserve University music educator Lisa Huisman Koops realized during the daily 20-minute commute to her daughter’s preschool that the family vehicle might be an ideal—and overlooked—place to develop a child’s awareness and interest in music.

The family car, she thought, could provide an option for harried parents who say they lack time for such music appreciation.

With a grant from W. P. Jones Presidential Faculty Development Fund at Case Western Reserve, she set out to discover if her hunch was correct.

Published this month in the Journal of Research in Music Education, “Songs from the Car Seat: Exploring the Early Childhood Music-Making Place of the Family Vehicle,” recounts how the shuttle time in the family “taxi” can offer parents and children space to create a symphony of sounds.

“So often, as parents, we think of long car trips or commutes as drudgery, but the participants in this study reported joyful, reflective, quiet and sparkling moments of music making,” said Koops, associate professor of music education.

For young children restricted to car seats, early music experiences can offer a diversion. According to Koops, other studies have shown that, over time, learning to sing for people of all aptitudes has its benefits.

PBSparents reports that learning the do-re-mis, music’s ABCs, taps into multiple skills that benefit learning in sharpening the use of their eyes, ears and muscles for moving.

Koops recruited five families with nine children combined who were enrolled in her early childhood music class at The Music Settlement. Parents were instructed to incorporate music activities into the daily routine, and asked to focus not only on what happens at home, but also while driving with their children.

The children, between the ages of 10 months and 4.5 years, were encouraged to sing, listen to music or react to different music they produced or heard on the car’s radio or CD player. Parents were encouraged to turn off their cell phones and just listen.

Over nine weeks, parents were asked to keep a journal of car-time music activities and report what kinds of music children liked, how they interacted with the music (quietly listening, humming or singing along) and what else the children did during their drives.

Koops also gave parents small video cameras so other family members could capture what the children did during the commutes. Some of the older children were even able to record themselves singing.

In exit interviews, parents answered questions about their experience.

Koops found the car offered advantages as a music space:

Koops’ message to parents: Sing to the children—whether in or out of tune—and let them see you enjoying the music. The modeling of singing bolsters the child’s willingness to sing.

“Providing children with a rich musical environment and expecting them to be musical ensures that children can experience music and find their musical voices during childhood and for years to come,” she explained.