From health monitoring to aviation, from mobile password protection to affordable high-end yo-yos and more 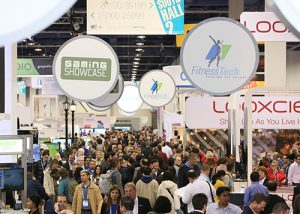 Nine teams of Case Western Reserve University student and alumni entrepreneurs will showcase their inventions and burgeoning businesses at the world’s premier stage for innovation, the International CES (Consumer Electronics Show) in Las Vegas Jan. 6-9. The annual exhibition draws more than 150,000 attendees from around the globe.

Two teams—Everykey and Carbon Origins, which introduced their concepts at last year’s CES—return and will join seven innovators displaying their products for the first time at the show:

The inventions began as class projects or hobbies or were the product of years of research. All are supported by think[ box ], the campus innovation hub that provides space, equipment and training to make prototypes and products. Teams also benefited from Blackstone Launchpad, a program that mentors students through startup and development, securing funding and taking an idea to market. Student teams are funded by the Blackstone Charitable Foundation and the Burton D. Morgan Foundation.

The Case School of Engineering was the only university organization exclusively showcasing student startups at CES 2014.

“Think[ box ] is where our students and faculty can, on their own, take those ideas in their heads and get them in their hands—that is, to actually go from concept to prototype,” said Jeffrey Duerk, dean of the Case School of Engineering. “Virtually each of the interdisciplinary student teams and some of the alumni teams going to CES have used and benefited from the physical assets and human resources we provide in the think[ box ] ecosystem.”

In its second year attending CES, Case Western Reserve will triple its presence.

“We look forward to our expanded involvement in the world’s largest display of innovation and discovery,” said Bob Sopko, director of the Blackstone Launchpad program at Case Western Reserve. “As a major research institution, we will be involved for our second year in a row, expanding from two to six booths (between 75427 and 75437 Tech West, Sands Expo, Level 2). Our students and alumni are excited to be demonstrating, selling and actively looking for partnerships.”

The teams and their innovations are:

Everykey (everykey.com), a Bluetooth-enabled wristband that allows the user immediate access to his password-protected electronics, such as a smartphone, tablet, or computer, as well as physically locked items including doors, car doors, bike locks and other controlled access devices, when within range.

“Everykey removes the stress and hassle of losing keys and forgetting passwords, while providing even better security than what consumers currently have in place,” said Christopher Wentz, CEO of Everykey and a 2013 CWRU graduate. “Our product uses military grade encryption, allowing only you access to your personal property and accounts. Like a credit card, you can instantly disable your Everykey if it ever gets lost or stolen.”

SpiroSano (spirosano.com), which helps patients with respiratory conditions, such as asthma, COPD or cystic fibrosis, track their activities and episodes around the clock and share that data with their doctor to improve treatment. Doctor and patient create and control a personalized disease management toolkit using SpiroSpano’s platform.

The web tools, devices and data components not only enable doctors to prescribe the best treatments for individual patients, but the system provides researchers data aggregated anonymously from a multitude of sources in a HIPPA-compliant way. Jacob Glenn, a 2002 computer science graduate, who also earned a master’s in engineering management in 2003, is a co-founder.

ArtKick (artkick.com), which turns a TV or computer screen into a gallery of artistic masterpieces, ranging from cave paintings to modern sculptures, the work of top photographers or simply your own snapshots. With a mobile device or tablet to navigate through millions of images organized by ArtKick, one can create a view list or slideshow that runs for a pre-set amount of time or loops continuously.

Choices include works of art from the world’s leading museums; images from the Library of Congress; photos from the red carpets of Broadway, runways of Paris and Hollywood premiers; major sports leagues in the U.S and around the world; the latest news from photojournalists on Earth or distant galaxies as captured by NASA’s Hubble Telescope. Sheldon Laube, CWRU class of 1972, is founder and CEO.

Doppler Yoyo, one of several competition-grade and collectors-grade yo-yos Spartan Yoyo Works creates using 3-D printing at a fraction of the standard production price. Undergraduate engineering students Vince Cozza and Zachary Lerner founded Spartan and developed Doppler’s novel design. The yo-yo is made of a single material and achieves a high moment of inertia by changing the geometry in ways that would be impossible without 3-D printing.

The Doppler features internal variable density rings. By maintaining a high fill density and high resolution, the yo-yos are rotationally symmetric with high moments of inertia and mass equal to that of a standard competition-grade yo-yo. But this yo-yo has a much cheaper net production cost of less than $20.

Carbon Origins (carbonorigins.com), a technology think-tank founded by a group of CWRU students who are taking time off from school to focus on solving hard technical problems in electronics and aerospace.

Apollo also has onboard WiFi and Bluetooth radios for networking. The software tools developed by the team allow users to take this data and derive useful information from it. The product was developed after one of the Carbon’s rockets crashed and burned, leaving the young scientists wanting to know why. Originally designed for their rockets, the product has now found applications for everything from robotics and drones to wearable computing.

CEO Jeff Taylor graduated with a BS in aerospace engineering from CWRU in 2009. He worked for SpaceX, then led the development team at 3D Robotics, the largest consumer drone company in the U.S. He co-founded Event 38 with the premise of offering reliable and affordable systems. “We’ve been lucky to have think[ box ] in our area, where we can take advantage of advanced prototyping equipment to shorten our development cycle,” he said.

BoxCast (boxcast.com), a company that has developed a plug-and-play broadcast box, within the display of Osmisys (osmisys.com), an electrical engineering technology firm. The Boxcast product allows anyone with a camera to conveniently stream standard and high-definition live video to the company’s cloud-based service for retrieval at any time and from any location.

“Every gathering these days has a camera running somewhere, but that footage is not always shared,” said BoxCast founder Gordon Daily, who earned a bachelor’s and a master’s degree from CWRU “BoxCast ensures that anyone with a device that connects to the Internet–from tablets and cell phones to personal computers—can watch the event as if they were there in person.”

BoxCast’s broadcast box automates an otherwise-cumbersome process and enables organizations to both reach and expand their audience. The product has been called a potential game-changer for churches, nonprofits and other organizations that can’t afford expensive recording equipment and crews.

360×360 Selfie Stick, patented in 2012 by CWRU alumnus Joshua Wang, of Taiwan. With a telescoping handle and a camera bracket that can swivel in any direction, the stick provides the distance to take “selfies” of large groups or to provide different angles or more background in photographs. The stick can also be used to take photos over walls, around corners and in hard-to-reach places.