Their new or developing technologies include: a sideline test to keep an athlete with a mild concussion off the field and out of danger from further damage, a maker machine costing less than $200 that prints hardware hacks or frosts a cake, and a pair of stuffed bears that transmit the touch of a faraway loved one. These and more will be displayed at CES in Las Vegas, Jan. 5-8. The trade show, produced by the Consumer Technology Association, draws more than 170,000 visitors from around the world.

Case Western Reserve, an important driver in Cleveland’s growing startup movement, is exhibiting for the fourth straight year. Representatives from the City of Cleveland, students and researchers from nearby and collaborating universities and Northeast Ohio entrepreneurs will join the university’s contingent to showcase the following and more (on the exhibit floor at Tech West, Eureka Park, Sands Hall G, 51100 to 51112):

Reflexion Interactive Technologies is developing a rapid, portable, low-cost concussion screening system to detect mild concussions at the athletic field, court or rink. “We can improve athlete safety by detecting mild concussions when they happen,” said Matt Campagna, a computer engineering major at CWRU, who is working with students from Cornell University and Pennsylvania State University to develop the system. reflexioninteractive.com 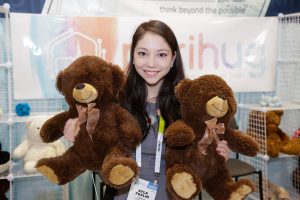 Parihug builds electronically connected teddy bears that allow loved ones separated by a few blocks or a few countries to make a physical connection. When a parent or sibling hugs one bear, soft, fabric-based sensors built in transmit a message to the other bear, which vibrates gently in the holder’s arms, explained Xyla Foxlin, a mechanical and aerospace engineering undergraduate who founded the company. parihug.com 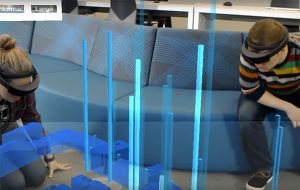 Interactive Commons, home to academic innovation in visualization at Case Western Reserve, will have three developers available to share their perspectives on developing for Microsoft HoloLens and the possibilities it brings to higher education. They will have a limited number of devices to share some demonstrations of the award-winning HoloAnatomy app, aimed at medical, nursing and dental students. case.edu/ic

Ottia Maker Machine brings creativity to the next level by putting 3-D printing, wood cutting, cake frosting and more into one affordable and easy-to-use machine. With this power, Ottia is able to live and evolve with the needs of any maker, from hello-world to hardware-hacking. Founder Connor Colombo, a first-year mechanical engineering and computer science major, hopes to break down the barrier to making for all, allowing anyone to have access to his or her own makerspace. ottia.xyz

BluBoard, an adaptable digital display, was founded in 2016 by a student team at Case Western Reserve to address the hassles and costs of paper signs that must be updated frequently and traditional digital signs that are burdensome to install and operate. Combining state-of-the-art, low-power e-paper technologies, long-range wireless technologies and cloud-controlled infrastructure, BluBoard is among the first no-wire, no-power, all-weather full display systems built for ease-of-use. Common uses include messaging queue stands, light-wall signs and outdoor informational kiosks. bluboard.io

EveryKey is a smart key that wirelessly unlocks your phone, laptop, house, car or any other access-controlled device when you are in range, and then locks it back down when you walk away. EveryKey also automatically logs you into your website accounts. everykey.com

BoxCast is a self-service, end-to-end streaming platform that makes it easy to deliver live, HD video from anyone to everyone, anywhere. The company has streamed more than 50,000 church events and more than 20,000 college athletic events. CEO and co-founder Gordon Daily, a double CWRU alum, said 10 percent of NCAA schools now rely on BoxCast streaming services. boxcast.com

The Cleveland Health-Tech Corridor is transforming the area between downtown Cleveland and University Circle into a thriving economic force with the support of Midtown Cleveland, the City of Cleveland, BioEnterprise and the Cleveland Foundation. Michael Lalich, project manager, will be on hand to discuss how the corridor has become home to more than 140 health-tech and high-tech companies and how to join them. healthtechcorridor.com

FlipSnap is an app that flips out of reality and into the world of an augmented reality (AR), allowing users to seamlessly merge themselves into videos and pictures with their favorite celebrities, brands and friends. flipsnap.com

Beyond showcasing new technology, Case Western Reserve’s Jeffrey Duerk, dean of the Case School of Engineering, will be a panelist during the 2017 CES TransformingEDU Forum on Jan. 7. The panel will discuss whether maker spaces, which are moving into some engineering classrooms, represent the future in education or just another project the industry is tinkering with.

Many of the innovations were made possible through support of the Burton D. Morgan Foundation, CWRU LaunchNet and the 50,000-square-foot, $40 million innovation space, CWRU Sears think[box].