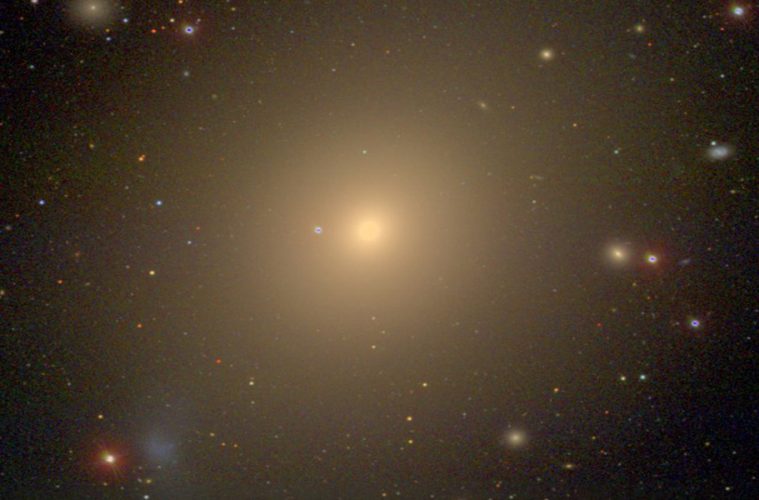 The team has shown this radial acceleration relation exists in nearby high-mass elliptical and low-mass spheroidal galaxies, building on last year’s discovery of this relation in spiral and irregular galaxies. This provides further support that the relation is tantamount to a new natural law, the researchers say.

“This demonstrates that we truly have a universal law for galactic systems,” said Federico Lelli, formerly an astronomy postdoctoral fellow at Case Western Reserve University and currently a fellow at the European Southern Observatory.

“This is similar to the Kepler law for planetary systems, which does not care about the specific properties of the planet. Whether the planet is rocky like Earth or gaseous like Jupiter, the law applies,” said Lelli, who led this investigation.

In this case, the observed acceleration tightly correlates with the gravitational acceleration from the visible mass, no matter the type of galaxy. In other words, if astronomers measure the distribution of normal matter, they know the rotation curve, and vice versa.

“But it is still unclear what this relation means and what is its fundamental origin,” Lelli said.

The researchers found that in 153 spiral and irregular galaxies, 25 ellipticals and lenticulars, and 62 dwarf spheroidals, the observed acceleration tightly correlates with the gravitational acceleration expected from visible mass.

Observed deviations from this correlation are not related to any specific galaxy property but completely random and consistent with measurement errors, the team found.

The tightness of this relation is difficult to understand in terms of dark matter as it’s currently understood, the researchers said.

It also challenges the current understanding of galaxy formation and evolution, in which many random processes such as galaxy mergers and interactions, inflows and outflows of gas, star formation and supernovas occur at the same time.

“Regularity must somehow emerge from this chaos,” Lelli said.

To make their discovery, researchers combined different tracers of the centripetal acceleration found in different types of galaxies, from which they made 1-to-1 comparisons.

The tracers were cold gas in spiral and irregular galaxies, stars or hot gas in ellipticals and lenticulars, and individual giant stars in dwarf spheroidals.

The investigation included so-called ultra-faint dwarf spheroidal galaxies, but due to their lack of light—which makes them hard to study—the researchers can’t confidently offer a clear interpretation of the radial acceleration relation in these.

Nevertheless, the growing proof of the relation, or natural law, requires new thinking about dark matter and gravity, the researchers said.

“Within the standard dark-matter paradigm, this law implies that the visible matter and the dark matter must be tightly coupled in galaxies at a local level and independently on global properties. They must know about each other,” Lelli said. “Within alternative models like modified gravity, this law represents a key empirical constraint and may guide theoretical physicists to build some appropriate mathematical extension of Einstein’s General Relativity.”

The team’s research so far has focused on galaxies in the nearby universe. Lelli and his colleagues plan to test the relation in more distant galaxies, just a few billion years after the big bang. They are hoping to learn whether the same relation holds during the lifetime of the universe.