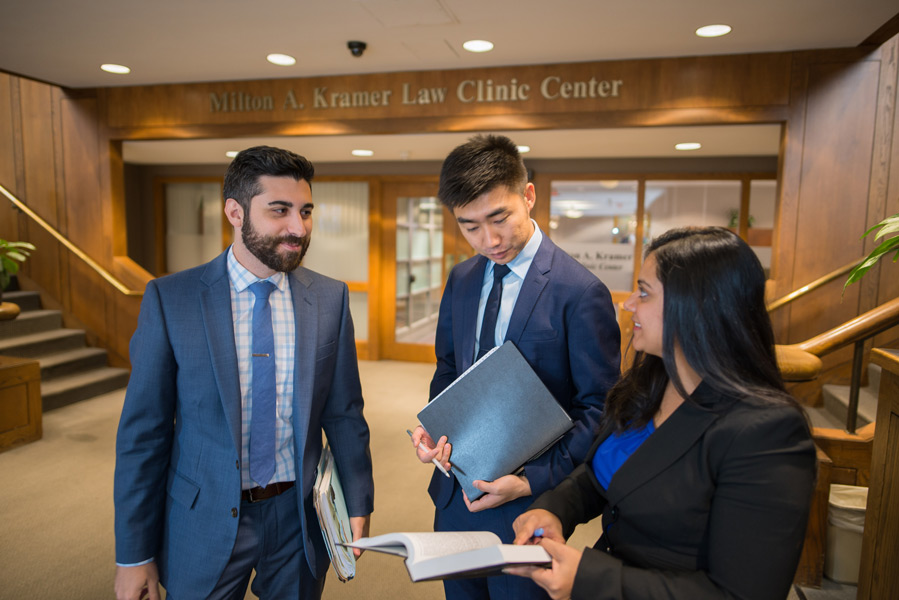 An Ohio inmate who practices Rastafarianism has sued the director of the state prison system and five others, claiming they violated his Civil Rights by forcibly cutting his dreadlocks and preventing him from keeping other requirements of his faith.

A team of three law students and their professor from the Case Western Reserve University School of Law’s Milton A. Kramer Law Clinic Center filed the complaint (PDF) Nov. 16 in the U.S District Court for the Northern District of Ohio, Eastern Division.

The students and law professor are representing plaintiff Cecil Koger, a 35-year-old inmate in the Trumbull Correctional Institution (TCI) in Warren, where he is serving a life-sentence for a 1999 aggravated murder and aggravated robbery conviction.

The lawsuit—which asks for a court trial, for changes in state policies regarding Rastafarianism and for unspecified monetary damages—alleges that prison officials violated Koger’s religious freedom guaranteed by the First and Fourteenth Amendments of the U.S. Constitution and the Religious Land Use and Institutionalized Persons Act.

That federal law prohibits prisons from impinging on inmates’ religious exercise unless those prisons can show their actions serve a compelling interest, and in the least restrictive manner.

“Both the framers of the Constitution and Congress have seen to fit to protect religious freedom,” Cirranello said. “We should protect all citizens from unreasonable governmental intrusion and any constitutional violations, no matter their faith or status in society.”

The complaint also contends that Ohio has made allowances for many other religions, including Christianity, Judaism, Islam and Asatru, a modern revival of ancient Norse paganism, but disfavors Rastafarianism.

Specifically, the students and law professor ask the court for a jury trial on the merits of Koger’s complaint and:

Dreadlocks at center of matter

Koger has been housed at six different Ohio prisons since 2000. The lawsuit alleges his dreadlocks have been forcibly cut five times, but that the prison has at other times allowed Koger to keep them un-cut, including one period of 18 months.

The prison has also allowed him at times, and other inmates, to satisfy security concerns by running their hands through their hair, the suit claims.

The complaint contends that a state prison system prohibition on the long, matted hair has been arbitrarily enforced and results from the state not recognizing Rastafarianism as a legitimate religion. The complaint further states that a TCI policy prevents any religious exemptions to the dreadlocks ban.

The suit alleges that the most recent cutting occurred Nov. 2, 2016, a date considered especially important to Rastafarians as it commemorates the coronation of Emperor Haile Selassie I of Ethiopia, an important figure in the religion.

TCI videotaped the cutting of Koger’s dreadlocks on that occasion, Cover said, but has refused a request for copies of the video on security grounds. The request is on hold in a lower court while the Ohio Supreme Court considers a similar claim, he said.

Koger said he was repeatedly pepper sprayed, then held down while prison guards cut his hair. He contends in the complaint that he felt “ungrounded,” and that his connection to his deity and religious community were also severed with the locks of his hair.

“It was worse than being spit on,” Koger said in a statement to his lawyers. “The Christians have their thing, the Muslim inmates have theirs. I just want to practice like everyone else.”

The suit claims Koger has been a “committed member of the Nyahbinghi Rastafarian Order” since 2000.

“Cecil’s dreadlocks are part of his identity; his family has been practicing Rastafarianism for generations,” Han said.

Rastafarianism began in the slums of Jamaica in the 1920s, and while there is no formal organized leadership, its adherents generally believe in the divinity or messiahship of Selassie and emphasize Jamaican culture and African heritage.

It is also considered an Abrahamic religion, referencing portions of the Old Testament of both Judaism and Christian traditions. Rastafari practices often entail the avoidance of alcohol, the wearing of one’s hair in dreadlocks and vegetarianism.

“Dreadlocks are Cecil’s connection to his faith, and practicing his faith keeps him grounded,” Chatterjee said. “He has even been prohibited from getting religious texts from his grandmother. This is unacceptable.”

The complaint alleges that at least 39 U.S. prison systems, including the Federal Bureau of Prisons, recognize Rastafarianism as a religion and either allow dreadlocks or afford Rastafarian inmates an opportunity to at least apply for religious accommodations.

“Ohio is woefully out of step when it comes to respecting prison inmates’ religious freedom as guaranteed by federal law,” Cover said. “Ohio’s prison system needs to get in line with the vast majority of states that either protect Rastafarian observances or at least limit religious practices as little as possible.”

Case Western Reserve’s law school clinics allow for third-year law students to actively participate in legal cases under the supervision of law professors instead of merely researching or observing.

CWRU was among the nation’s first law schools to start such a program, and today the Milton A. Kramer Law Clinic Center, which houses the human rights clinic and others, handles more than 100 cases a year, amounting to about 16,000 hours of pro bono legal work.

“The students have done a tremendous amount of work on the case,” Cover said, “from interviewing the client on a number of occasions at the prison and making public records requests from the state and prison to researching the law and drafting the complaint.”