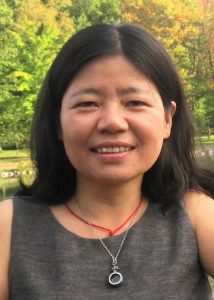 For the second consecutive year, a Case Western Reserve University School of Medicine researcher has landed one of the much-coveted Director’s New Innovator Awards from the National Institutes of Health (NIH). Principal investigator Rong Xu, assistant professor of medical informatics, will receive $2,377,000 for five years, starting immediately, to initiate computational analysis of thousands of drugs and their effects.

The NIH review panel unanimously agreed that Xu’s proposal was “exceptionally innovative,” and she received a near-perfect score of 12 by the NIH grants rating system. (A perfect score is 10 on a scale that ranges from 10 as the best for “high impact” to 90 as the weakest for “low impact.”) The NIH review panel summary stated, “Overall, the proposed research was viewed as being very exciting, and the review panel was extremely enthusiastic about the success of this application.”

Her research will involve applying artificial intelligence, data mining, machine learning, statistics and network techniques to match the effects of some 6,000 existing drugs with more than 100,000 diseases for which these medications could provide relief. The Food and Drug Administration designated these 6,000 drugs as approved, investigational or failed. In her computation, Xu will factor in the effects for which the drug was developed, as well as surprise benefits discovered about a drug since its introduction to the market. She will also review side effects. A drug’s side effect for one person’s condition may prove to be a beneficial action for another person’s illness.

“Right now, it is serendipity that a number of drugs on the market have been discovered to have benefits other than those for which they were initially developed,” Xu said. “With computer science, the process can be automatized for discovering those additional benefits.”

Key examples of recently discovered additional benefits include Viagra and aspirin. Viagra was developed to treat erectile dysfunction in men, but recent findings have revealed that the drug also reduces pulmonary hypertension. Historically, aspirin has been used for headaches and muscle pain, but its use has now extended to prevention of cardiovascular disease and colon cancer.

In her investigation, Xu will comb all published biomedical literature (22 million published or online-posted works so far), as well as all existing genetic, genomic and chemical databases. She will search for the known and unknown—expected outcomes, adverse side effects, unexpected physical manifestations and surprise benefits. The technology she will use enables high-volume computerization and artificial intelligence to match systematically at one time the effects of approximately 6,000 drugs to the clinical manifestations of 100,000 diseases.

Xu’s study additionally accounts for pharmacogenomics variables in drugs. Pharmacogenomics refers to a drug’s response based on genetic influences from one person to another. Genetic variations make a difference in the way genes act within a person to control drug absorption, distribution, metabolism and elimination. Her phenotype-driven approach will pave the way for identifying and making connections between unique drug and disease phenotype data. (A phenotype is the composite of an individual’s physical characteristics.) These phenotype connections will provide her with crucial information to predict how individuals with specific phenotypes might respond to a drug.

Once Xu develops hypotheses about hundreds of drugs based on data she collects, she will test them in a retrospective study using patient electronic health records (EHRs). For her investigation, she will collaborate with David C. Kaelber, to collect and review relevant patient data from EHRs at MetroHealth, a health care system in Cleveland and other healthcare organizations. Kaelber is a School of Medicine associate professor of internal medicine, pediatrics, and epidemiology and biostatistics and chief medical informatics officer at MetroHealth Medical Center. In processing the data, she will compare drug effects—good, bad and unexpected—as reported in the patients’ records with her own findings about drug effects from her computational study.

If her approach works well, it could well open another pathway to drug discovery. The current drug discovery model starts with compounds developed in the lab to address a specific illness and then tested in animals first and humans later. A big limitation with the traditional approach is that it comes with a 90 percent failure rate. Most of the time, the compound will work in the animal model but not in humans.

“My approach is a direct human-to-human approach,” she said. “I, or the computer, will observe something in humans, and then I will use what I have observed to translate those observations to drug treatment. That’s one of the innovative parts of this investigation.”