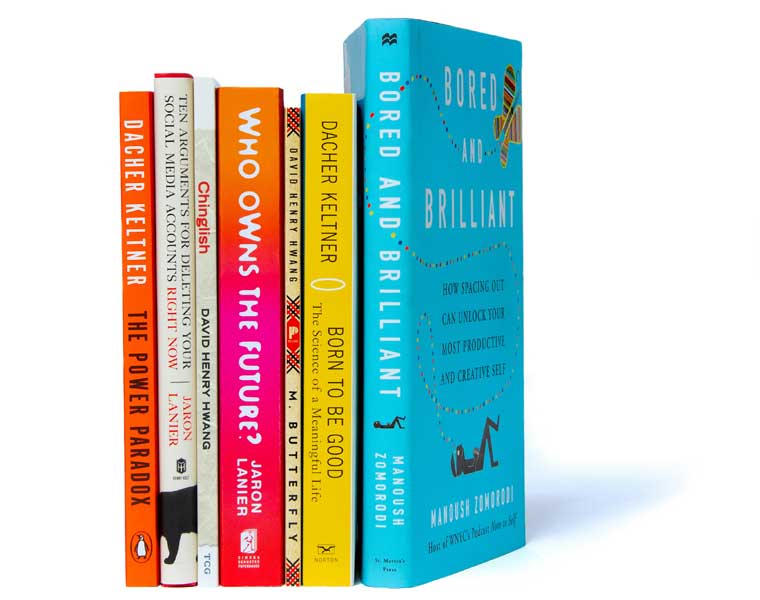 Lineup features award-winning authors, a playwright, leading-edge researchers on compassion and love, and taking back your life from that ubiquitous cell phone

A playwright who has been compared to no less than dramatist Arthur Miller. A renaissance man named among TIME’s most influential people. A psychology professor who studies compassion, love and meaning. And the co-founder of a company that helps people take back their lives in the grasp of a digital age.

All lectures are free and begin at 6 p.m. at the Maltz Performing Arts Center, 1855 Ansel Road. Paid parking is available on site, although a free shuttle service will be available from campus.

Events are free, but pre-registration is required. Reservations for the fall lectures are available now, and for the spring lectures starting Jan. 3. Reservations may be made online or by calling the Maltz Center box office at 216.368.6062.

The 2019-20 Think Forum schedule consists of two lectures this fall, one in March and the fourth in April.

Zomorodi is co-founder of Stable Genius Productions, a media company with a mission to help people navigate personal and global change. StableG uses podcasts to test new ways journalists can educate, entertain and inspire through narrative. The company’s first project is “ZigZag,” a podcast about changing the course of capitalism, journalism and women’s lives.

In 2012, Zomorodi created, hosted and was managing editor of “Note to Self,” a podcast for “anyone trying to preserve their humanity in the digital age.” In 2015, she led tens of thousands of listeners through an experiment to help them “unplug from their devices, get bored, jump-start their creativity and change their lives.” Her book Bored and Brilliant: How Spacing Out Can Unlock Your Most Productive and Creative Self builds on that experiment to demonstrate how to rethink our gadget use to live better and smarter in this new digital ecosystem. Fast Company named her one of the 100 Most Creative People in Business for 2018.

Few writers have turned issues around ethnicity and identity into a widely acclaimed and award-winning career like Hwang. The Chinese American playwright, described by The New York Times as “a true original” and by TIME magazine as “the first important dramatist of American public life since Arthur Miller,” is best known as author of M. Butterfly. That enduring 1988 work, which won a Tony Award, Drama Desk Award, John Gassner Award and Outer Critics Circle Award, was also a finalist for the Pulitzer Prize.

M. Butterfly has been staged in more than four-dozen countries and inspired a major motion picture. His newest “play with music,” Soft Power, with composer Jeanine Tesori, premiered in 2018 in Los Angeles and opens in New York this fall.

Hwang’s play Golden Child subsequently played on Broadway, where it received three Tony nominations, and Yellow Face, a finalist for the Pulitzer Prize, was named one of the best American plays of the past 25 years by The New York Times in 2018—the year he also was inducted into the Theater Hall of Fame.

Lanier is a computer scientist, composer, artist and author who writes on numerous topics, including high-technology business, the social impact of technology, the philosophy of consciousness and information, internet politics and the future of humanism.

Lanier’s first book, You Are Not a Gadget, A Manifesto, considered an expression of spiritual sensibility in high-tech times, was a New York Times, Los Angeles Times, Boston Globe and international bestseller. His fourth book, Ten Arguments for Deleting Your Social Media Accounts Right Now, is another international bestseller, synthesizing what we know about the new technology of tricking people with algorithms.

Keltner is a professor of psychology at the University of California at Berkeley, director of the Berkeley Social Interaction Lab and serves as faculty director of the Berkeley Greater Good Science Center. His research focuses on the biological and evolutionary origins of compassion, awe, love and beauty, as well as power, social class and inequality. In addition to his university work and research, Keltner has collaborated on projects at Facebook and Google and was the scientific consultant for Pixar’s film Inside Out.

Dacher is the author of The Power Paradox, as well as the bestseller Born to Be Good: The Science of a Meaningful Life and The Compassionate Instinct. He has published over 190 scientific articles, including seminal works on the psychology of awe and is the co-author of two textbooks. He has written for The New York Times Magazine, London Times and Utne Reader, and his research has been covered in TIME, Newsweek, The Wall Street Journal, The New York Times, CNN, NPR and the BBC as well as many other outlets.

Keltner’s presentation is the F. Joseph Callahan Distinguished Lecture, presented with support from the Callahan Foundation.