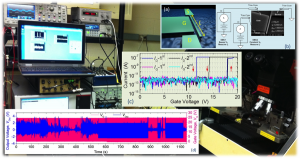 By relentlessly miniaturizing a pre-World War II computer technology and combining this with a new and durable material, researchers at Case Western Reserve University have built nanoscale switches and logic gates that operate more energy-efficiently than those now used by the billions in computers, tablets and smartphones.

Electromechanical switches were the building blocks of electronics before the solid-state transistor was developed during the war. A version made from silicon carbide, at the tiniest of scales, snaps on and off like a light switch, and with none of the energy-wasting current leakage that plagues the smallest electronics today.

The scientists reported their findings last week at the International Electron Devices Meeting in Washington D.C.

The tiny switch’s moving part is only about one cubic micron in volume, more than a thousand times smaller than devices made in today’s mainstream microelectromechanical systems (MEMS). Thus, this switch can move much faster and is much lighter.

The switch has also proved durable, operating for more than 10 million cycles in air, at ambient temperatures and high heat without loss of performance—far longer than most other candidates for a non-leaking switch.

The development is significant because switching devices are at the heart of computing and communications technologies.

“In our pockets and backpacks, nowadays we often carry mobile devices that consist of billions of such building blocks, which are switching on and off to perform the information processing functions,” explained Philip Feng, professor of electrical engineering and computer science at Case Western Reserve and leader of the project.

Silicon-based metal-oxide-semiconductor field effect transistors, called MOSFETs, are the dominant switching devices in integrated circuits and have led to many extraordinary technologies enjoyed today, Feng said. But continued miniaturization of silicon MOSFETs over the past several decades has recently slowed, as power consumption and heat dissipation have become major challenges.

Energy is lost and heat generated because nanoscale MOFSETs leak like an old faucet. Electrons continue to travel through a switch that’s turned off.

“The silicon switches are leaking power at about 1 to 10 nanowatts each,” Feng said. “When you have a billion of these on a computer chip, you’re losing a few to tens of watts of power. That will consume the battery you carry, even when the transistors are not actively performing computing functions.”

Large data centers aren’t only wasting that energy; they’re paying the costs of cooling to prevent computers from overheating.

Tina He, Feng’s PhD student in electrical engineering and computer science at Case School of Engineering, provided details about making and testing the switches in her presentation, “Silicon Carbide (SiC) Nanoelectromechanical Switches and Logic Gates with Long Cycles and Robust Performance in Ambient Air and High Temperature,” at the international meeting.

The research team has made three-terminal, gate-controlled switches and different kinds of logic gates—fundamental elements used in computing and communications.

“Compared to silicon and other common materials, SiC is quite special because it is much more resistive to oxidation, to chemical contaminants and to wear,” Feng said. “Those properties should lend themselves to devices with more robust performance while protecting them from harsh operating environments.”

The work is supported by grants from the Defense Advanced Research Projects Agency’s Microsystems Technology Office and the National Science Foundation.

The Institute of Electrical and Electronics Engineers has hosted the international meeting for nearly 60 years, to report breakthroughs in a growing range of electronic device technology.