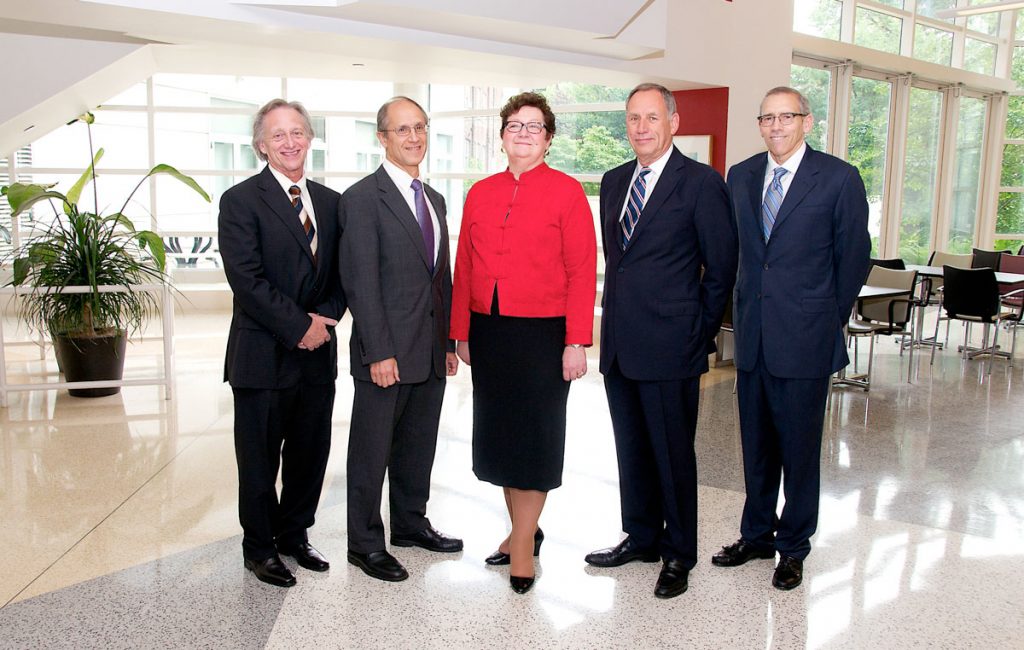 From left: Brian Bolwell, associate director for the Case Comprehensive Cancer Center and chair of the Taussig Cancer Institute; Stanton Gerson, director of the CCCC; Pamela B. Davis, dean of the School of Medicine; Toby Cosgrove, president and CEO of the Cleveland Clinic; and Jeffrey C. Rothstein, president of University Hospitals.

The Case Comprehensive Cancer Center (CCCC) again demonstrated the compelling power of partnership in securing an overall rating of “outstanding” and a five-year renewal of its grant from the National Cancer Institute (NCI).

Hosted at Case Western Reserve, the center is a collaboration among the university, Cleveland Clinic and University Hospitals Case Medical Center.

The center counts nearly 350 scientists and physicians among its members, and is one of just 41 nationwide to hold the NCI’s designation as a comprehensive cancer center. Such elite organizations must demonstrate not only the highest quality of basic and clinical research, but also engage across disciplines and actively educate the public regarding prevention and treatment breakthroughs.

The renewal comes with a recommendation the center receive more than $23 million during the course of the grant period.

“This grant renewal underscores the extraordinary value of cooperation among Northeast Ohio’s leading medical institutions and the university,” Case Western Reserve President Barbara R. Snyder said. “By combining our collective resources, we provide far greater opportunities to advance the fight against cancer and bring better answers to patients and their loved ones.”

The center has held NCI designation for the past 25 years and attained the highest recognition—comprehensive status—in 1998. Case Western Reserve and University Hospitals served as the center’s original founders, and the Cleveland Clinic joined the initiative in 2003.

As part of the most recent renewal process, the three organizations adopted a formal set of governance and operating principles, and also codified their shared commitment to the center’s sustained success. The agreement proved so pioneering that the national team of experts twice emphasized its significance within their assessment. In particular, the experts commended the “exceptional” institutional support from the participating institutions, as well as the partnership’s implications for the future.

“With the ‘Memorandum of Understanding’ (MOU) in hand, “ assessors wrote, “the Center is now much better positioned to take full advantage of the consortium partnership.”

All told, Cleveland Clinic and University Hospitals Seidman Cancer Center treat nearly 10,000 new cancer patients each year. The presence of the CCCC allows all of these individuals the opportunity to participate in clinical trials and otherwise benefit from the concentration of expertise within the three organizations. Typically, almost 3,000 patients annually participate in some form of center-related research.

In addition, the participating institutions attracted more than $115 million in cancer-related research in 2012. The MOU emphasizes the center’s role as the leading coordinating body for this research, as well as the primary authority of director Stanton Gerson, in all of the center’s operations, initiatives and appointments.

“As the evaluation team noted, we have an exceptional leader who has steered the center to impressive growth and impact since he became director in 2004,” said Pamela B. Davis, dean of the School of Medicine and vice president for medical affairs. “We look forward to even greater progress in the years to come.”

Among the center’s most noteworthy achievements over the most recent five-year review period are:

Center members have demonstrated growing expertise regarding the role of genetic factors in the development of different forms of cancer—findings that, in turn, offer pathways to prevention and cures. A few of the more recent findings include:

The Case Comprehensive Cancer Center accelerates research progress in part through the provision of 15 shared resources—among them “core facilities” that offer equipment and consulting to advance scientists’ work in such fields as biostatistics, genomics, and cytometry and imaging microscopy. The space allotted to these offerings has grown by more than 84 percent during the grant review period, another testament to the commitment among all of the center’s institutional partners.

“At University Hospitals, our commitment to curing cancer every day has compelled us to invest more than $360 million in the last five years to growing our cancer program’s impact. During the course of the grant review period, we opened the Seidman Cancer Center, a 375,000-square-foot facility that is the region’s only hospital solely dedicated to the unique needs of the cancer patient,” said Thomas F. Zenty III, chief executive officer of University Hospitals. “This state-of-the-art, patient-centered hospital, which houses the nation’s most advanced treatments and technology, is only one of many examples of our commitment to the Case Comprehensive Cancer Center and advancing cancer cures for our patients.”

“Membership in the Case Comprehensive Cancer Center demonstrates Cleveland Clinic’s commitment to collaborative research, cutting edge clinical trials and continued innovation as a way to improve people’s lives,” said Cleveland Clinic CEO and President Toby M. Cosgrove. “What these institutions can accomplish together is greater than what we can accomplish apart.”

The center also has begun to engage in collaborations with cancer centers at The Ohio State University and the University of Cincinnati to expand the scope of research projects and involve more top scientists in developing lifesaving treatments.

“Over the past five years, we have achieved remarkable new levels of strategic focus and broad engagement across the center’s membership and beyond,” said Gerson, who is also director of the Seidman Cancer Center. “Our task now is to capitalize on the talent and commitment that exists within the center to provide even greater hope to patients and their families.”

Through the renewal review process the center won endorsement for full funding based on the final year of its previous grant—an award that would total $25 million. The amount of the grant announced has been reduced by approximately 6.5 percent because of the federal government’s sequester, but could return to approved levels in coming years.

The center’s strategic plan for the next several years includes building on existing areas of strength and also establishing more formal and active initiatives to battle brain and breast cancers. The center leadership also emphasized the importance of enhanced training opportunities for future oncologists as well as improved access to clinical trials for patients throughout Northeast Ohio.

“The Case CCC is an important regional and national resource for cancer research and care,” the assessors wrote, “and it continues on a strong upward trajectory…”

Gerson emphasized that the center’s progress traces directly to its members—in particular the leaders who provide strategy, guidance and inspiration to researchers, physicians, patients and, yes, the director himself.