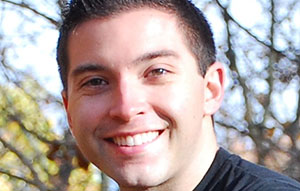 A budding anthropologist, Frank Manzella first took an interest in Brazilian culture and the Portuguese language when he worked for an immunodermatologist in a clinic frequented by Brazilian immigrants in Buenos Aires, Argentina.

While reading for his master’s degree at the University of Oxford, his interest in Brazil grew even more after learning about its culture

“The country is so large—with such a diverse population, rich history, and changing economic developmental context—it is hard to resist having a passion for Portuguese as an anthropologist,” Manzella said.

With the support of the prestigious David L. Boren Fellowship administered by the National Security Education Program (NSEP), Manzella, a second-year doctoral student in medical anthropology at Case Western Reserve University, will study Portuguese at the Portuguese School of Middlebury College in Vermont this summer, followed by a year studying and researching in Rio de Janeiro.

Boren Fellowships are awarded to outstanding U.S. graduate students who aim to add an international and language component to their graduate education.

At Middlebury, “All students sign a language pledge to speak only in Portuguese, 24/7 during the program,” Manzella said. He will have opportunities to practice the language outside daily language classes through Brazilian cooking and dance classes, Portuguese-speaking lectures and films, and more.

“As one would expect, the campus looks absolutely beautiful,” Manzella said. “I just can’t wait to be in Rio. The food, the people, the sun, the beaches, the music—I could go on and on.”

While in Rio de Janeiro, Manzella will live with a homestay family and have the opportunity to establish contacts with Brazilian anthropologists and institutions. He will take Portuguese courses in the fall and spring semesters, as well as a one-month intensive Portuguese course in January.

Learning Portuguese will be essential for Manzella’s future: He plans to return to Brazil the following year to conduct long-term ethnographic fieldwork for his dissertation.

The fellowship will support his pre-dissertation fieldwork, a pilot study titled “Adolescent Narratives of Social Exclusion and Immobility.” He will spend the last four months talking to adolescents and gathering their “illness narratives,” or stories related to how their living conditions have affected their health. Many Brazilian adolescents are subject to extreme poverty, Manzella said, which has led to them being socially excluded and, therefore, less socially mobile.

The combination of poverty and social exclusion, in addition to a host of other factors, can lead to poor health conditions and behaviors that must be considered in public health research, he said.

Also during his time in Brazil, Manzella will work on a cross-cultural research project on global fat stigma that is funded by the National Science Foundation and Case Western Reserve’s Office of International Affairs and College of Arts and Sciences.

Manzella credits his adviser, anthropology’s Eileen Anderson-Fye, with invaluable supervision throughout the year, particularly in refining his research interests and developing a plan to achieve his future career goals. He also received guidance from other anthropology faculty: Vanessa Hildebrand, Janet McGrath and Katia Almeida.

In the future, Manzella said he would love to work for the federal government in a position that would allow him to use his anthropological training to address health disparities among marginalized populations.